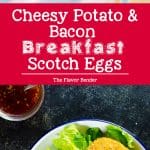 A warm, comforting breakfast/brunch like these Cheesy Potato & Bacon Scotch Eggs  (Breakfast Scotch Eggs) is the perfect start to those colder days that are just around the corner.

Perfectly cooked eggs with a rich, golden yolk and then wrapped in a potato, bacon and cheese filling that’s deliciously seasoned with spices and herbs, then breaded and fried, are as close to breakfast heaven as you can get! 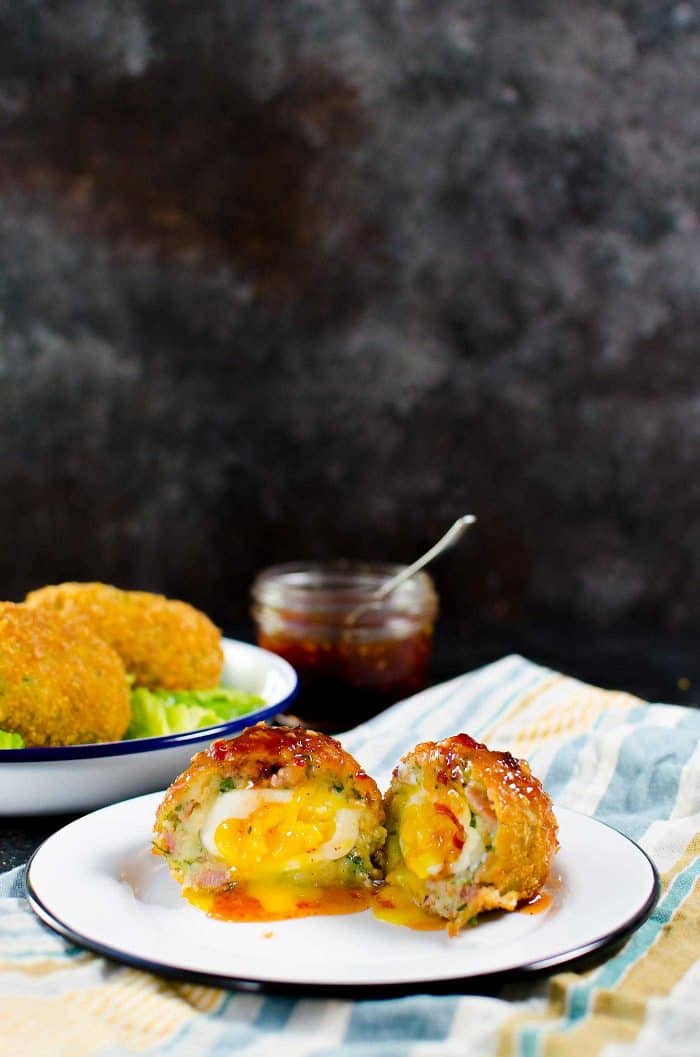 There’s something about a runny egg yolk that makes my heart beat faster in my chest. I’m one of those annoying customers who would send their poached eggs back (accompanied by an apology) if they are even slightly overcooked. I really do take my eggs seriously.

Which is why I love a perfectly hardboiled egg with a soft egg yolk. Traditionally, a scotch egg is a hardboiled egg, wrapped in seasoned sausage meat and then breaded and fried. It’s a simple meal packed with nutrition! In this recipe, I decided to put a twist on the traditional and the result was these egg-tastic Cheesy Potato & Bacon Scotch Eggs, deliciously seasoned with spices and herbs! They are so damn fine you wouldn’t want to eat eggs any other way after this!

Originally scotch eggs came to be as a traveler’s snack, although that origin story is steeped in some mystery. A quick google search will tell you that a London department store called Fortnum & Mason invented scotch eggs in 1738, for posh/affluent coach travelers as a portable snack. With time they moved down the social ranks and have now become very popular in Britain. An alternative theory claims that it may have been inspired by an Indian dish called nargisi kofta. Yet another theory argues that scotch eggs came to Britain from Africa, by way of France. But no where do they mention Scotland. Apparently scotch eggs are as Scottish as I’m Martian. So why potatoes? That’s another nod to the anglophile in me. Bubble & Squeak is something I love to eat for breakfast and you can check out this recipe from a few months ago where I made bubble & squeak with potatoes, spring onions, red cabbage, carrots and herbs. It’s sort of like the British version of hash browns (though not as crispy). I added cheese for some extra gooey, cheesy goodness and then bacon because… well, we all know why! One of those things that trip up home cooks sometimes is peeling an egg properly (especially a softboiled one). I’m sure you may have your own little trick for it. This is what works for me. 🙂

– I use slightly older eggs, because they pull away from the shell a little more readily than really new ones.

– Keep them in very cold running water or an ice bath (immediately after cooking), until they are cold enough to handle.

– Crack the egg all over, and peel it under a slow stream of cold water, letting the water get under the shell and loosen it up.

– I start peeling a small strip from the bottom (rounder part) to the top (pointed end) on one side, and then peel the rest of it, moving in one direction.

Like I said, I’m sure you have your own way, so feel free to use whatever trick that works for you. 🙂

For a meal, you could make two scotch eggs per person, to be served with a side salad. I served these with some caramelized chilli sauce, that gave these an awesome Asian twist too! You can serve these with the Spicy Sweet Chilli Sauce I made, which is so easy to make, and would go perfectly with these scotch eggs! Wait until the potato, bacon and cheese filling has cooled down completely. Make four to five portions out of it. This filling makes enough for 4 eggs, with a generous filling wrapped around it. It can be stretched out to make for 5, with a thinner filling wrapped around it. I usually go for 4 eggs, because 1 scotch egg with a side salad makes a very filling brunch for me.

Place a piece of saran wrap on the table and flatten out a portion of the filling on it as shown below. Flatten it out to a long oval shape. Leave this in the fridge for at least one hour, or overnight, for the scotch egg to hold it’s shape. This is especially helpful when you are breading the scotch eggs. I love using crushed cornflakes instead of regular breadcrumbs. It definitely adds a lovely crispy coating to these scotch eggs. You can use panko crumbs instead too and it will still be really crispy. If you use regular bread crumbs that are really fine, I recommend a double coating, as a thicker shell/extra breading will be better.

You only need to fry the scotch eggs until the coating is nice and crispy and the scotch egg is warmed through – only about 1 – 2 minutes! 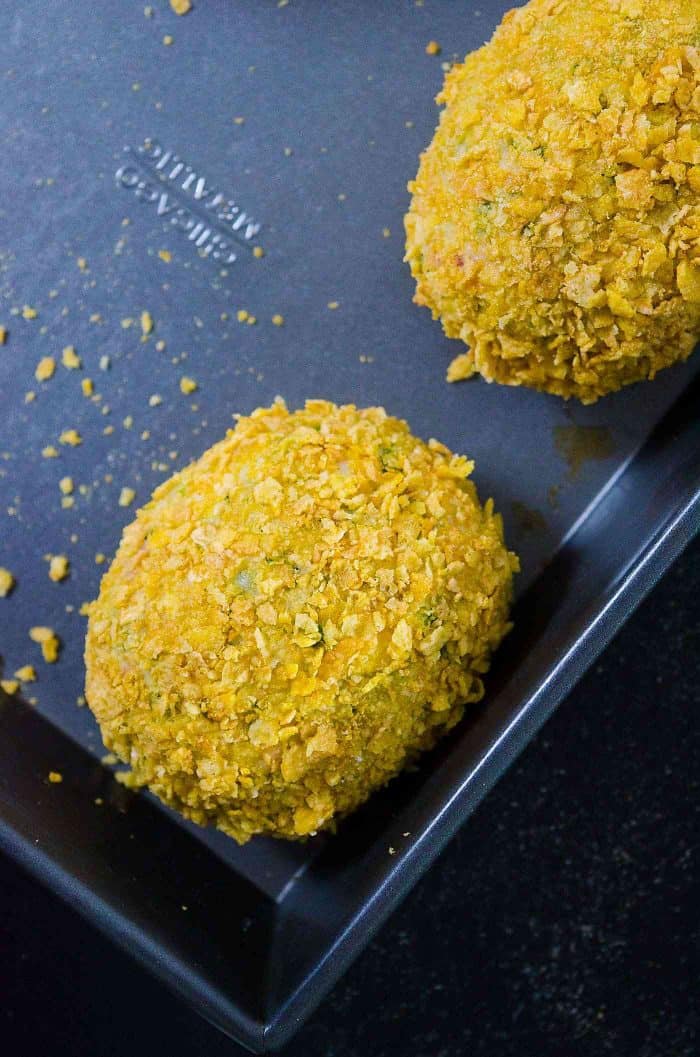 Unlike traditional scotch eggs that have a relatively hard wrapping made out of sausage meat, these ones have a soft filling encasing that beautiful, rich, golden egg yolk that’s just set around the edges and runny in the middle. And that filling is all bacon bits, potato, cheese, spring onions and herbs! How freaking fantastic does that sound? And they taste even better! And with a little drizzle of sweet chilli sauce on top – this is breakfast heaven folks! Even if you’re the kind of strange alien who doesn’t like hardboiled egg or anything egg (I’m looking at you Guy Fieri!), you couldn’t possibly resist a perfectly cooked egg wrapped in all this deliciousness and then breaded and fried, could you? These are also great as snacks or picnic food or a light meal with a salad. 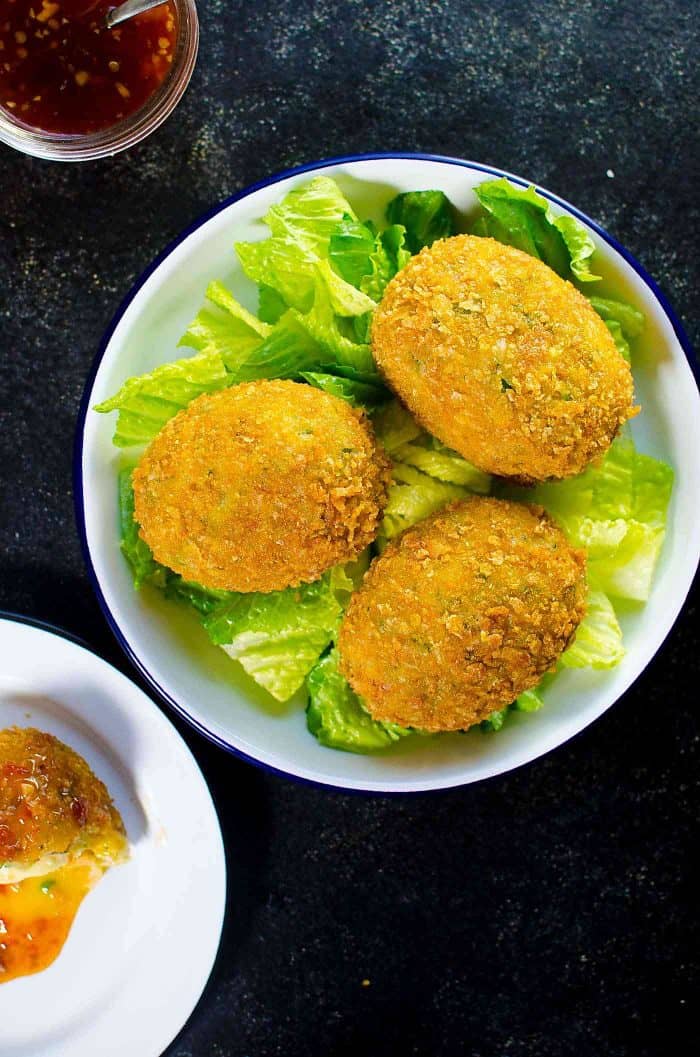 These scotch eggs are the kind of thing that makes me LOVE what I do! These are so damn awesome! This is quite possibly my favourite way to eat eggs now. And Mr K goes crazy for these scotch eggs too. So much so that he often requests this on weekends. 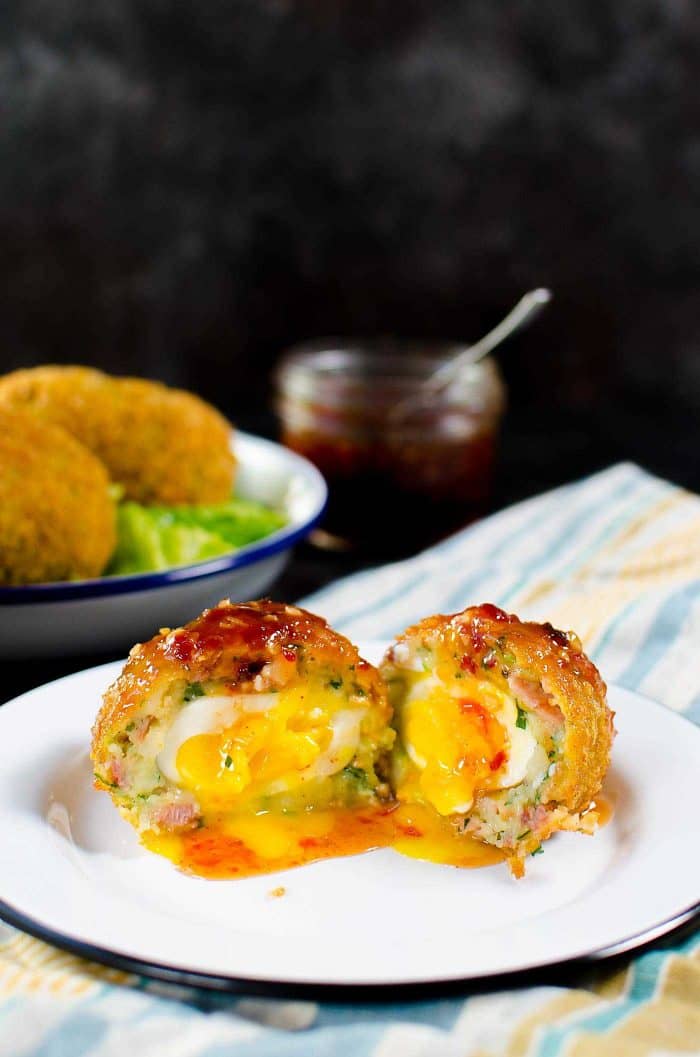 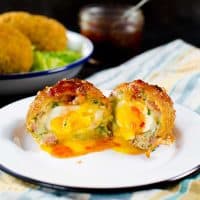 If you liked this cheesy potato and bacon scotch eggs (breakfast scotch eggs) recipe, don’t forget to subscribe for new (and free) recipes and updates by entering your email address below or in the box on the side-bar (and get all these recipes delivered straight to your inbox), so you don’t miss out on a thing. You can find me on FACEBOOK, TWITTER, INSTAGRAM, PINTEREST and GOOGLE-PLUS too.

IF YOU LIKED THIS, THEN YOU HAVE TO CHECK OUT,