If necessity is the mother of invention, as Plato is claimed to have once said, I’m going to go ahead and say that failure must also be closely related to it. While coming up with new recipes is great fun to me, there are times when I’m met with epic failures. While I prefer not to talk about how I used to react to these failures when I was younger (I kindly request my family to not comment here if they are reading this!), I can safely say that I handle these situations a lot better now. A few weeks ago I turned a less than perfect Chocolate Babka into a Chocolate Raspberry Bread Pudding which I loved, and this time I turned these multicoloured fruit roll-up failures into fruit and chocolate bars. Not just any fruit and chocolate bar – but a Doctor Who scarf inspired, Chocolate Rainbow Fruit Bars!

I made these for my entry in the Time Lord Chefs “Old School” Doctor Who Food event hosted by Katie from Recipe for Perfection (formerly called “The Perfect Brownie” – be sure to check out her re-vamped blog!). To me the most iconic Doctor from the classic series is the fourth one played by Tom Baker. My mum (who wasn’t a DW fan until I made her watch the episode “Blink”) refers to him as the “the doctor with an Afro” (not quite, but you get the picture – see below). He even made a guest appearance in the 50th anniversary episode (The Day of the Doctor) which was pretty awesome! Plus did you know Tom Baker’s Birthday is on the 20th January? That’s tomorrow!

Every Doctor in the series so far has had something unique about him. From Jelly babies, Celery Stalks, Bananas, Fish Fingers and Custard (here’s my take on that), Converse shoes, Fezzes (Here are my edible fezzes) to Jammie Dodgers and so many other things! Tom Baker (the fourth doctor) had his scarf which was colourful and quirky in the way he wore it and I was inspired by it to make a fun dessert. I would LOVE to actually own a scarf like this. I currently own this “Doctor Hoo” t-shirt (among other Doctor Who things in my wardrobe and kitchen) but this scarf would certainly be a fantastic addition.

So back to the failed fruit roll-ups. To create the colours on the scarf I used blackberry (purple-ish), strawberry (red), pineapple and peach (yellow), pineapple, peach, banana and spinach (green). I took two good shots at it. The first time I left them in the oven for seemingly too long so they promptly became fruit crisps instead. I didn’t try to replicate all the colours in the original doctor’s scarf, only chose the more striking colours. The second time around I laid out thicker fruit layers and spread them out a bit more along the long edge. It still got quite crispy although the blackberry layer came out perfectly.

So what was the problem? As I later realized (which I honestly should have expected) each fruit layer or fruit component dehydrates in the oven at different rates. So while the purple blackberry layer came out well at the temperature and time I selected, this was too much for the other layers which came out crispy (and that obviously doesn’t work for a fruit leather) even though I spread those layers a little thicker than the blackberry layer. I will still keep working on this to find out how I can get multiple fruit layers to dry up in the oven at the same rate. When I do, you guys will be the first to know! So how did I salvage it? With chocolate of course. After all, chocolate fixes everything right? 🙂 I added a thin layer of chocolate to the sheet of dehydrated fruits. I made the chocolate layer thin enough so that the chocolate flavour wasn’t overwhelming and shield all the delicious fruity flavours.

By the way, did you know that chocolate saved the 6th doctor’s life when he was poisoned one time by an alien who added soluble aspirin (which is poisonous to the Time Lords) to his tea? The chocolate nullified the effects of aspirin and saved his life! So there you have it. There are so many questions in life for which the sole answer is chocolate! You can make these with any of your favourite fruits or use store-bought fruit roll-ups to make it easier. Even if your fruit roll-ups dry up a bit too much like mine did, you need not worry because that works just as well for this recipe. 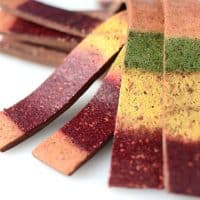 These Rainbow Fruit & Chocolate Bars were inspired by the Fourth Doctor's (Doctor Who) iconic scarf. While it isn't an exact replicate, you have the freedom to mix and match fruits to get unique colour and flavour patterns you like. These are great for kids' parties, as snacks or even as part of Doctor Who themed parties!
Serves 13 x 1 inch by 8inch strips
Print Rate

Please see Notes below for information on yield.

You could potentially make 2 trays of chocolate rainbow fruit bars with this recipe if you wanted to. I have just given directions to make 1 tray. I used the leftover fruit puree to make yummy smoothies!
Did you make this?Tag me on Instagram!I love seeing what you’ve made! Tag me on Instagram at @TheFlavorBender or leave me a comment & rating below.

What was even better than the dainty look of these things was the taste. With every bite you get a hint of the fruit flavour which then gives way to the chocolate flavour. And as you move along the chocolate fruit bar you will taste the different fruity flavours. The blackberry flavour was the strongest with strawberry coming in second. The yellow and green flavours weren’t as strong although there is still a subtle hint of it. The next best thing was the colours! I had some fun making different patterns with the colours while taking photographs as you can see below. I can only imagine how little ones will have heaps of fun with it too. And there’s so much room for you to play around with the colours and the amounts of it and the thickness of those bands, this is a truly fun dessert to make as well eat. I think I’m going to go ahead and call these imperfectly perfect. They came to be because a recipe turned out to be less than perfect, but made their second coming as little treats that tasted perfect. And while they may not look like perfect artisan chocolates, they are perfectly fun to eat! So do you see how I got my inspiration to make these from the fourth doctor’s scarf?

There will be more Doctor Who themed awesomeness to come and  here are some of the other bloggers creations for this round of #TimeLordChefs. If you are a whovian like me, you can check out some of my previous Doctor Who themed deliciousness below too. And maybe you can have a “Jelly baby” while you are at it too! 🙂

You can find me on on FACEBOOK, TWITTER, INSTAGRAM, PINTEREST and GOOGLE-PLUS or maybe even send me an email too. I’m pretty active on these platforms and would love to hear from you. You can subscribe to get future posts and recipes from me by entering your email address below or on the side bar. 🙂