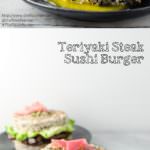 Nothing’s going to make sushi connoisseurs everywhere roll their eyes in disdain like these Teriyaki Steak Sushi Burgers! And isn’t that just the BEST? 🙂 I mean these are burger “buns” made out of seasoned sushi rice, with perfectly cooked, glossy, caramelized, sweet teriyaki flank steak in the middle, and then decoratively wrapped in a strip of roasted seaweed. As someone who loves inspired cooking, I adore this marriage of two distinct food cultures! (RECIPE + VIDEO) 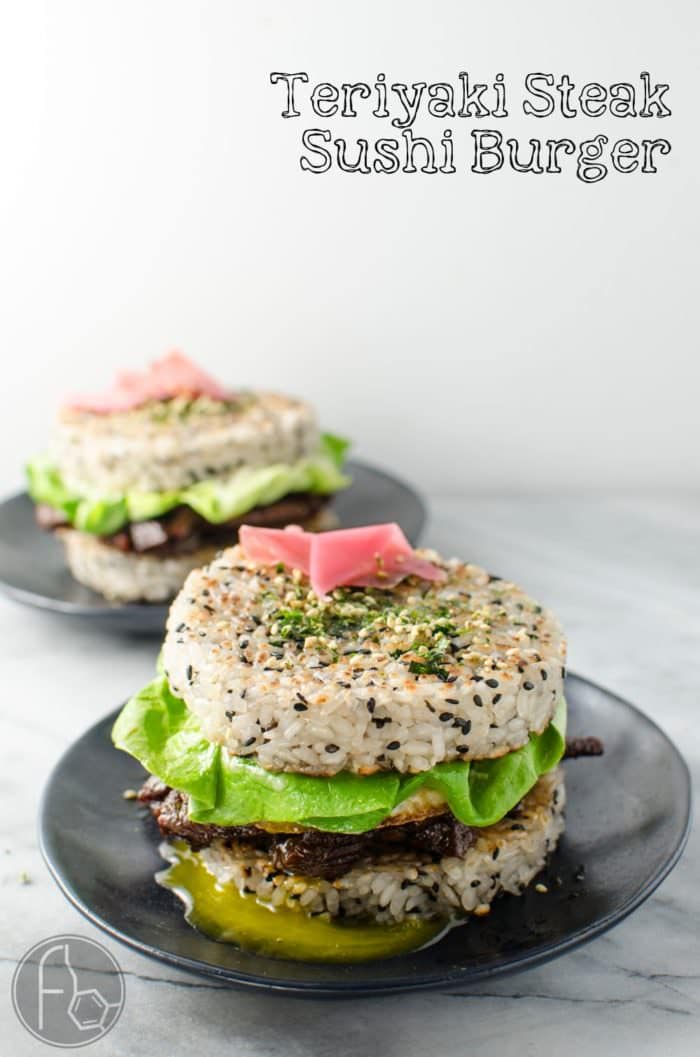 Sushi bars are everywhere in Australia. Some places are fancier than others and feature “sushi-go-rounds” (or sushi trains) while others serve a distinctly fast food culture where they sell them by the roll for take away. This latter kind is of course cheaper (with standard fillings and flavours, and no caviar) but just as delicious. For a while they were my fast food meal of choice (especially with some pickled ginger). Yum! I found them to be a tastier and healthier alternative to burgers (which were also everywhere!), that didn’t leave me with a greasy feeling of guilt inside. (Not that I’m opposed to greasy food. Heck, I’m not opposed to any kind of food! How sacrilegious would that be? It’s just that greasy fast food has a time and place, and lunch break every day didn’t seem like it.)

Then one day, when I was away from home for work, I came across an invention that you could only have expected from a fast food restaurant chain (MOS burger) that originated in Japan. Sushi burgers! For a whole week my lunch was Sushi burgers, and I’ve been waiting to try them at home since then. For far too long now, I should add. The wait is no more. Behold these Teriyaki Flank Steak Sushi Burgers!

So what’s a sushi burger? It’s like your regular burger (well, not really), except that the burger “buns” here are made of sushi rice. You can either have a sushi type filling or a burger type filling in the middle. You can wrap the whole “burger” with Nori (seaweed) or just sprinkle some Nori Furikake seasoning. Basically, it’s the kind of thing that will have sushi connoisseurs everywhere rolling their eyes in disdain.

And as you can tell, the star of my filling was Teriyaki steak. Now, I’ve had teriyaki before, which I’m sure everyone who likes Asian food has at some point. The problem though is that I’ve had way too many watered down, pale brown versions of “teriyaki” meat. Not the authentic, glistening, sweet, grilled meat (which incidentally is what teriyaki translates to; shiny/glossy, grilled or broiled meat). The shine comes from the sugars and the mirin (sauce).

You can use flank steak (which is my favourite cut for the sushi burger), or skirt steak. But I have used other cuts too, like top round. You can even use tenderloin or New York strip if you want to. The main thing is to use a cut that you can slice thinly, against the grain so that it remains tender after being grilled.

The teriyaki marinade is so easy to put together and can also be used for chicken (which I did by the way and was delicious!). I added some cayenne pepper to give it a little bit of heat, and also to balance the sweetness. This teriyaki recipe is very versatile. You can cook the teriyaki sauce and store it in the fridge to be used as a dipping sauce, marinade or stirfry sauce. Or use the mix as a marinade, before cooking it off.

If I don’t have teriyaki marinade in the fridge, I sometimes mix up a smaller amount of the ingredients and marinade the meat directly in it and cook it all off at the end.

The glossy, caramelized meat looked and smelled (and tasted) incredible and you better believe it when I say that it was sheer will power that kept us from finishing off the meat (on its own) before we could assemble the burgers! In my husband’s case it was me slapping him away that kept him from finishing the meat! 🙂 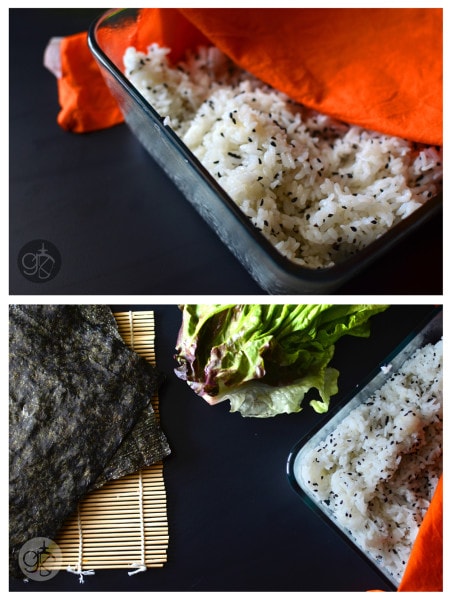 A note on Sushi rice – I used to be intimidated by sushi rice. I can cook rice like Basmati in a rice cooker without measuring out the rice and water with a cup, but sushi rice? I was not so sure. But then I did make it, and it turned out to be just as easy! And now I wonder what I was afraid of for so long! Of course I don’t have any traditional utensils to cook sushi rice, but I make do with what I have.

To make the Sushi “Buns” by hand, you need to make sure you have clean hands (obviously!) and a bowl of cool water that you can dip your hands in before handling the rice. This prevents the rice from sticking to your hands.

Another way (my preferred way), is to use egg rings. Place the portioned sushi rice in a moistened egg ring, and press the rice into it using a wet spoon until it has been molded and packed in. Then when you remove the ring, you have perfect rice “buns”!

Here’s another knowledge bomb. Traditional “Sushi” is named as such because of the seasoned rice. If you roll up bread with stuff inside – that ain’t sushi, because there’s no actual sushi in it (the seasoned rice).

I love the idea of a sushi burger. As someone who loves inspired cooking and food, this marriage of two distinct food cultures/styles is an amusingly clever idea. It is a little messy as you can imagine (after all, the “burger buns” are made of tightly packed sushi rice and they do fall apart a little), but isn’t that always the case with a good burger? I eat mine with chopsticks, whereas my husband enjoys his with a fork and knife. It’s not the traditional way to eat a burger but it’s not a traditional burger either!

I’ve even made a chicken version of the sushi burger – Chicken Katsu Sushi Burger – with perfectly cooked Chicken Katsu, a cheat’s Tonkatsu sauce, and a fluffy and delicious Asian spring onion omelet! So go ahead and get the recipe now! 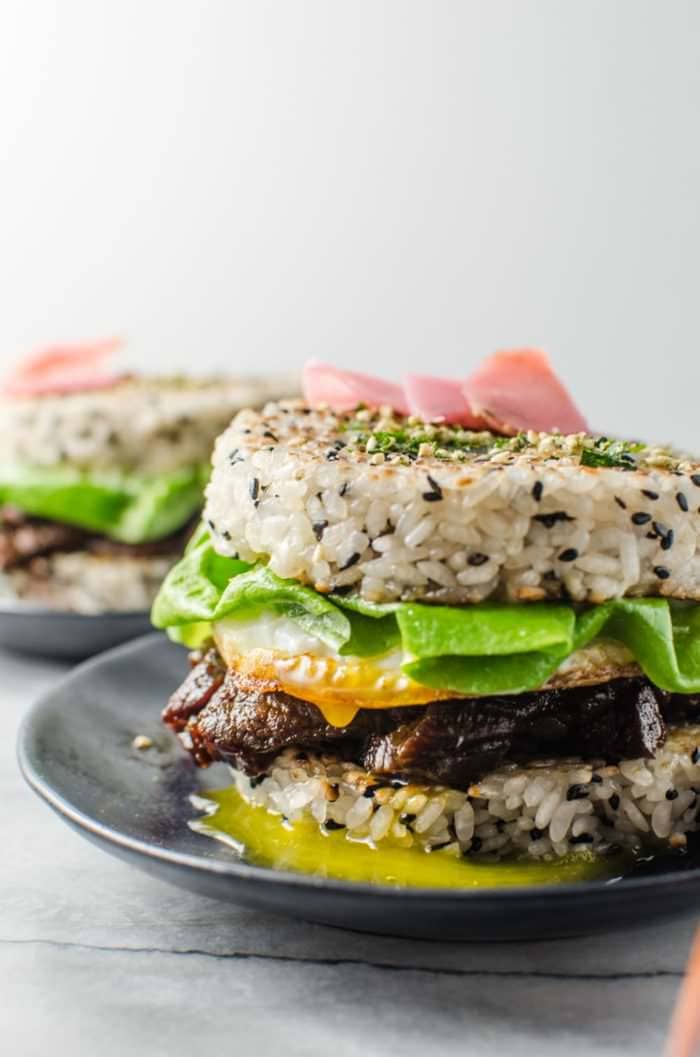 My version of the steak Sushi Burger has Teriyaki sauce, Wasabi Mayonnaise, a runny egg, Nori furikake, and Pickled Ginger. I absolutely adore pickled ginger – I am guilty of eating it straight from the Jar, and stealing extra packets from Sushi bars! I also love having mine with an egg – to me there is something glorious about a golden runny yolk being soaked up by a sweet, vinegary rice “bun”! However, if you decide to skip the egg, that’s okay too. He has since come to the dark side, and loves his with a runny egg too!

Or you could have it as an open sandwich, with just one sushi rice bun and the meat filling, egg and nori, lettuce and pickled ginger on top – This is my way of eating this burger most of the time. Since two “buns” can be too much for me.

No matter how you decide to eat it, the flavours are absolutely incomparable! The sushi rice is seasoned really well and the perfectly cooked steak strips and marinade are incredibly flavourful and impart their flavour on the rice as well. Even though you do add a fair amount of sugar into the teriyaki sauce, it’s not too sweet at all. It tastes perfect, and the spices help balance the sweetness too. 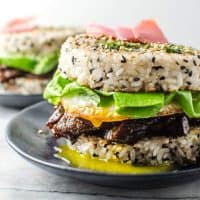 Note for Teriyaki Sauce - You can follow this recipe and make a sauce, or mix all the ingredients (make sure the sugar dissolves) and just use 1/2 cup of the marinade directly to marinate the steak (as in the video). and use the leftover to make the Teriyaki sauce/glaze. 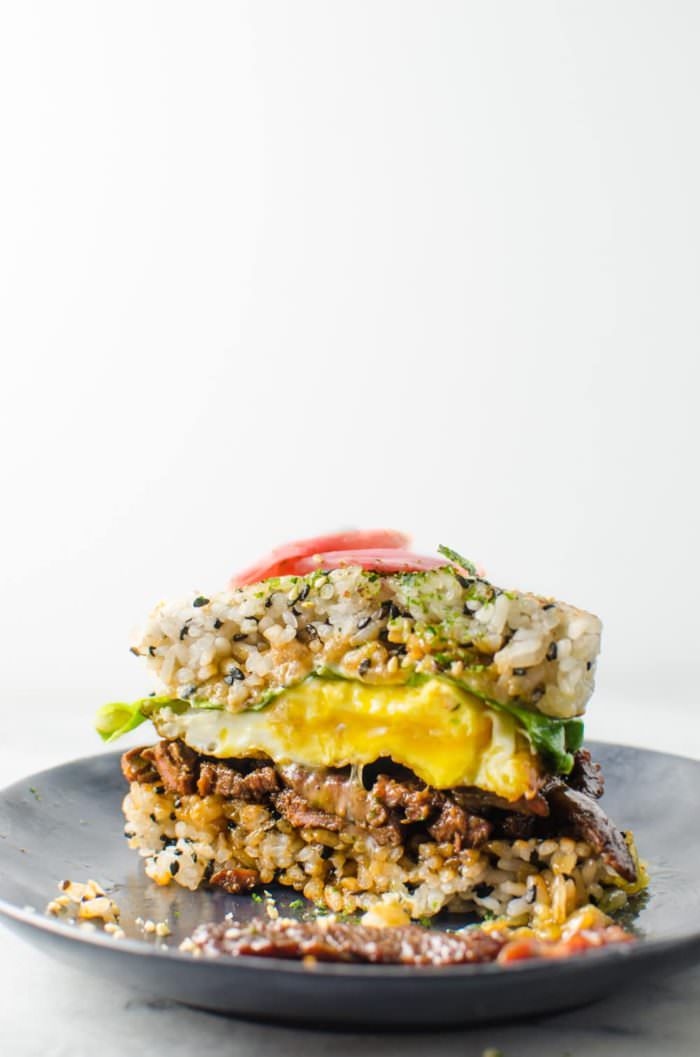 So, what did we learn today?

Sushi is called that because of the seasoned rice. Not the sea weed wrapper or the shape. No seasoned rice – no sushi.

This is an inventive way of enjoying sushi! It’s easier than you think and you can use any filling you like! (so stay tuned, more ideas coming up very soon!)

Teriyaki roughly translates to shiny or glossy grilled or broiled meat. So make sure you’re making authentic teriyaki because it’s super easy! The shine is a result of the caramelization of sugars in the mirin.

Photos from the first version of the Teriyaki Flank Steak Sushi Burger published in 2015. 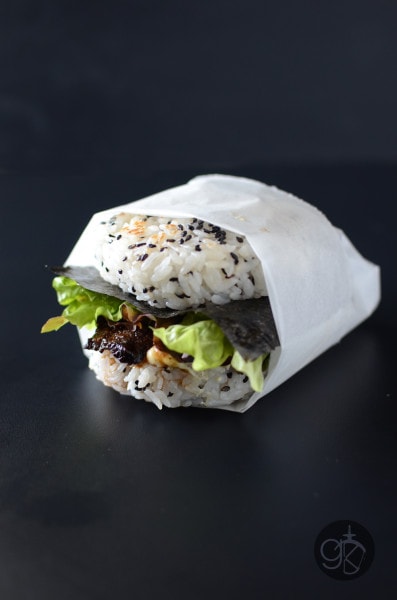