Nearly every food culture has their own version of flat bread. From tortillas in Mexico to flatbrød in Norway, from naan and chapatti in India to bing in China, we have been baking flat breads since we discovered how to mash edible grains into a paste and then bake it. And that’s a pretty long time. There is a Sri Lankan version too called “roti” (a rather generic term for flat bread in that part of the world), which I love, but Naan is also something that I cannot get enough of. It’s usually the first thing we order when we go to an Indian restaurant. The smell of freshly baked naan delivered to our table in a small wicker basket always gets us salivating like Pavlov’s dogs! Naan is the type of bread that strikes a great balance in texture by being soft and fluffy without being too thick and we always order it with some garlic butter brushed on top. And inevitably more than half of the naan order is over by the time the rest of our meal arrives. 🙂

Since going out to an Indian restaurant every time we have a craving for naan is not very practical, I now make my own. This recipe for Whole Wheat Naan with Garlic & Cilantro Butter brushed on top is my go to, and it’s an absolute winner! You can of course buy naan at your grocery store, but homemade is what I always prefer. And why not, when it only takes very little effort and when you can so easily personalize it however you like. I use whole wheat flour because I love that nutty flavour it adds to the bread. I love how light these flat breads are. Those brown or black spots all add flavour to that soft and puffy naan. Remember that traditionally, naans are baked in a very hot oven (“tandoor oven”). I’ve seen them being made like that and it’s incredible. So that’s why a very hot pan is used to replicate that cooking process. It’s the next best thing. Naan is a type of leavened flat bread and it gets that distinct flavour from the fermentation process. Yeast is vital for this. Some traditional naan is said to be made from bread starters (much like sourdough bread). This recipe is an easier way to get as much of those amazing and complex flavours of naan as you can. In addition to yeast, yogurt also plays a big part in doing that. And if you leave the naan dough to rest in the fridge overnight, those flavours will intensify even more.

A note on the flours – you could use just whole wheat flour too if you prefer. The problem I have with that is using just whole wheat tends to make the naan a little heavier/denser for my liking. However, if you can get your hands on Atta flour (which is made out of durum wheat and is used a lot in Indian cooking by the way) – please use it! I love using Atta flour whenever it’s available! 🙂

I also made a cilantro and garlic butter just to brush on top of the naan after it was cooked. It’s not necessary, but oh boy, it takes those flavours to a whole new level! Every bite is a soft, buttery, flavour-packed mouthful! 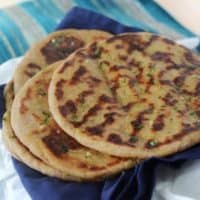 Naan bread is often made in a tear-drop shape, but you can see that I did not. It’s just a personal preference and you can make them in any shape you like. It’s going to be delicious no matter what shape it is! 🙂 This is soft and fluffy with a hint of sweetness and tanginess coming from the yogurt and the yeast. The melted herby garlic butter brushed on top of the warm naan perfectly rounds off that amazing flavour profile. You’re going to be eating it just by itself, I guarantee it! And in case you’d like to eat it with something else, you got plenty of choices for that too. Typically naan is eaten with a side of curry, using your hand to break off a piece of the naan and scoop up the curry with it like you would with a spoon. So keeping with the theme of Indian cuisine, let me suggest this amazing Butter Chicken. As true curry aficionados, my husband and I highly recommend it! We also recently used naan bread as the perfect vehicle for an out-of-this-world wrap, which you’re going to hear about on here very very soon! You do not want to miss out on that!

So what’s your favourite flat bread? Besides pizza perhaps. Do you like eating your flat bread like a wrap? Or dunk and soak it in a spicy and delicious curry? You can also find the recipe for my home-made whole wheat tortillas here.

Don’t forget to subscribe for new recipes and updates by entering you email address below to get all these delicious recipes delivered to your inbox so you won’t ever miss out.

You can find me on FACEBOOK, TWITTER, INSTAGRAM, PINTEREST and GOOGLE-PLUS too. I frequently share pictures of  recipes to come on the blog plus other awesome recipes I find out there that I want to try. So I hope you do stop by and say hi! 🙂