This is not your ordinary Fried Chicken recipe! It’s Spicy Bloody Mary infused Fried Chicken to go with your waffles! Flavourful, Crunchy, Crispy Fried Chicken marinated with all the flavours of Bloody Mary and scotch, fried to perfection and then drizzled with sriracha and maple scotch syrup! So don’t be like Archer, forget the gummy bears and scotch, and have THIS for breakfast, dinner or “brinner” instead!

Just a heads up peeps – The new season of Archer premiers tonight, and this post is a form of celebration of this fact. So I imagine some of the references in this post might escape you, if you don’t watch the show on a regular basis. But I promise the recipe is a doozy (as always of course!), even if you’re not a fan of the show. It’s a hilarious, adult-themed animated show that you’re either head over heels (phrasing!) in love with, or just as passionately hate. You know which group I belong to. 🙂 And fair warning, there’s some mildly coarse language ahead, because I wanted to do right by the show. 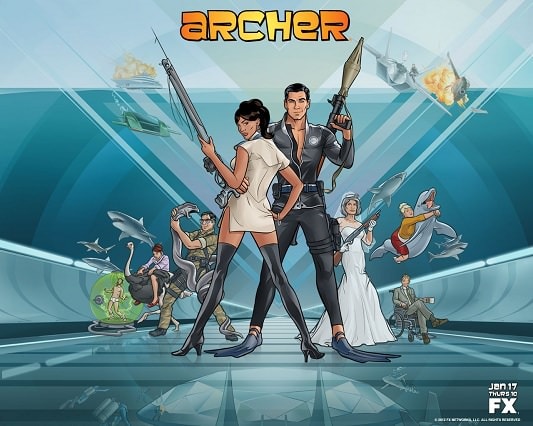 So with the exciting prospect of NEW Archer episodes starting today, Matt from Nomageddon came up with this fantastic idea for a few of us to do an Archer-themed recipe post to celebrate. So you can bet your ass we’ll be watching the show tonight, while stuffing our faces (phrasing!) with all this glorious food! 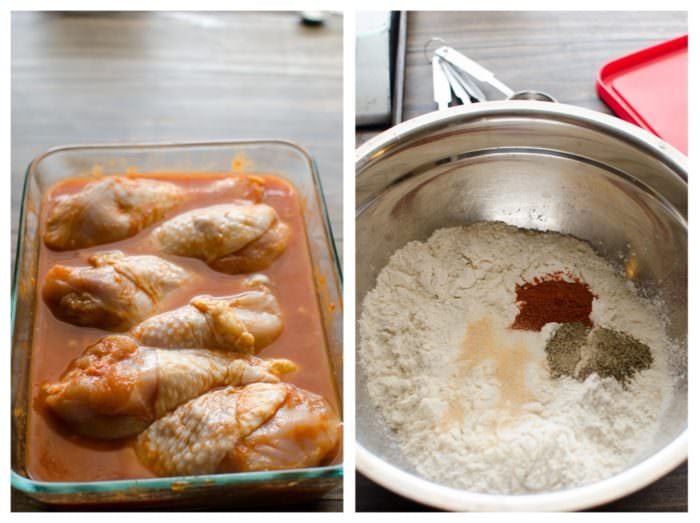 For anyone who hasn’t watched the show before, let me sum it up for you. Archer is a master spy and the show is basically all about alcohol, cocktails, food, sex, lots of shooting, and lots of blood. Not necessarily in that preferential order. See, you already like the sound of it don’t you? But hey, that’s just my opinion. Maybe you can give the show a try and see if it means anything else to you. Don’t hold your breath though. 🙂

I’m not much of a fan of Bloody Mary actually, but fried chicken infused with Bloody Mary? Come on, now! I’ll stuff my face (phrasing!) with that all day!

Being a big fan of the show, I knew I wanted to do an alcohol-themed recipe for this post, but wasn’t really sure which way to go. Thought about shit snacks (not what you think), bear claws (definitely happening on the blog soon), and even Archer’s own concoctions like the Black Mexican (Archer’s words, I promise), Peppermint patty, and Pam’s Green Russian. But after another Archer binging marathon (by the way they just released the last season on Netflix the other day, so this girl has been OD’ing on Archer the last couple of days), I decided spicy Bloody Mary infused fried chicken and waffles were going to be my way of paying homage to my favourite “secret” spy. 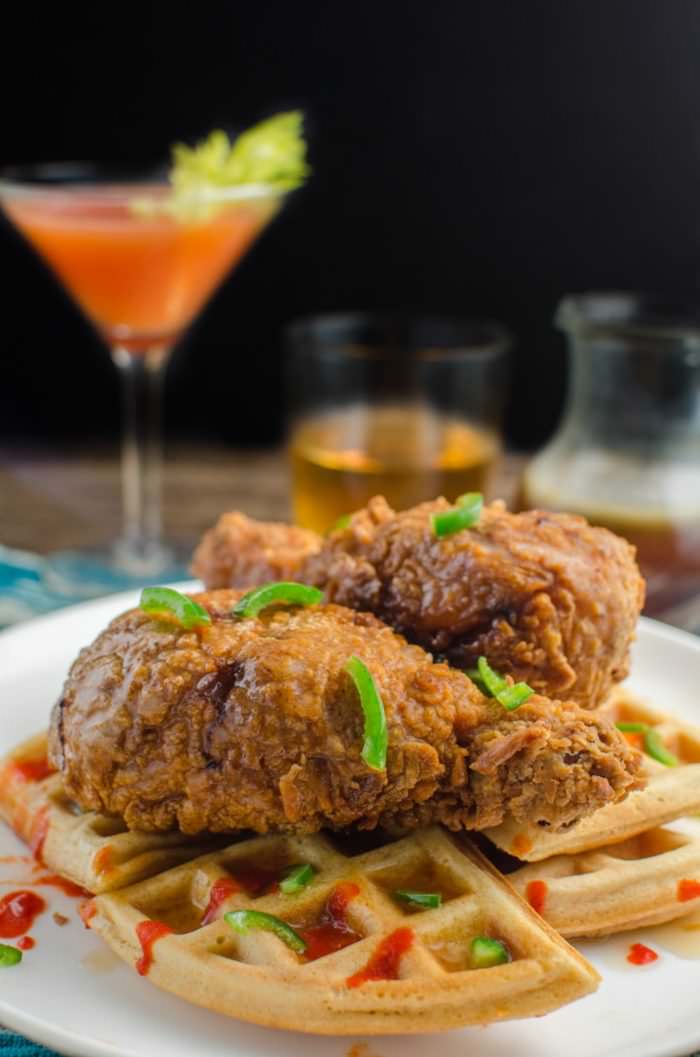 Usually, fried chicken is brined for a few hours in a seasoned buttermilk. I decided to go about it in a different way. These chicken pieces were soaked in a marinade of tomato juice, Worcestershire sauce, sriracha, pepper, and scotch. Tomato juice is acidic enough to still tenderize and flavour the chicken just as buttermilk would, except that the chicken will now have that amazing subtle spicy tomato flavour with a hint of scotch!

Plus there’s a good amount of warm, buttery maple scotch syrup that goes on top of the chicken too! 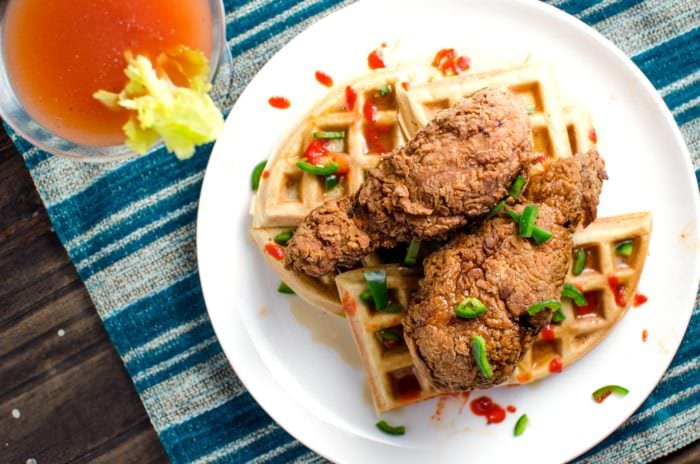 I have long since been a fan of fried chicken and have tried to make it all my life. I was great at frying the chicken, but not so much with the delicious crunchy coating (you know, like KFC?), until I saw a show on the Food Channel (in New Zealand) where they added liquid to the flour to create those delightful lumps. It’s fair to say that my life has forever changed since then. I added the Bloody Mary marinade to the flour here and boy, that crunchy coating you get on the chicken is oh-so irresistible!

The sriracha drizzle is optional, but I love it! Not only does it taste delicious together with maple syrup, but a splatter of it over your fried chicken is symbolic of all the blood shed that occurs in the show. It’s a bloody massacre, alright. 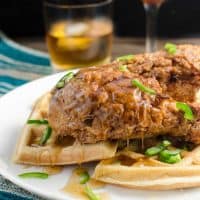 So do  yourself a favour and eat it all… every last crumb ok? “Because that’s how you get ants!” “Do you want ants? Do you??” 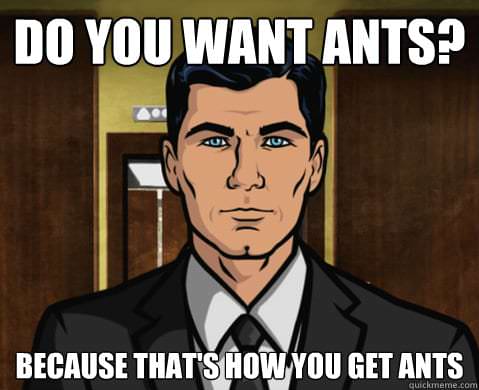 So what did we learn today?

I am a big fan of Archer. Goes without saying at this point.

You can infuse your chicken with some spectacular flavours to make fried chicken! And for even better results, add some booze (it also acts as a tenderizer – for the surface, so I’d call that a win-win).

Adding that little bit of liquid (Bloody Mary marinade in this recipe) to the flour makes it form lumps that result in beautifully chunky, crispy fried chicken that’s juicy, tender and moist inside and shatteringly crisp on the outside.

Salt is you best friend in your marinade. Salt really goes inside the meat when it’s marinating (through osmosis), so it’s OK if you sprinkle a little extra salt on top.

As salt gets absorbed, more liquid is absorbed (which is why the chicken is “brined” and stays nice and juicy!). Example? If you eat very salty food, you get thirsty right? So you drink a lot of liquid because your body needs to “balance” the salt molecules in your muscles.

If you liked this recipe don’t forget to subscribe for new (and free) recipes by entering your email address below or on the side bar (and get all these recipes delivered straight to your inbox), so you don’t miss out on a thing. You can find me on FACEBOOK, TWITTER, INSTAGRAM,  PINTEREST, and YOU TUBE too.