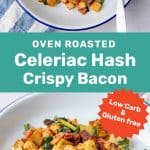 Crispy Bacon with oven roasted celeriac hash is an incredibly flavorful breakfast for any time of the week! Earthy & sweet, this recipe transforms celery root into a weekend brunch worthy meal! Plus it’s freezer friendly too.

Earthy, sweet celeriac hash is the one celeriac recipe that you must make!

Here’s a potentially controversial statement. This celeriac hash is better than potato hash. There, I said it.

Celeriac (or celery root) is that ugly duckling vegetable that often gets ignored at the grocery store. But looks can be deceiving.

If you’re new to the world of celeriac recipes, then this recipe for Oven Roasted Celeriac Hash with Crispy Bacon is the you-just-can’t-go-wrong starting point.

What is celeriac (or celery root)?

Celeriac or celery root is a very knobby root vegetable. Celery stalks and celeriac are from the same plant as well.

Celeriac is more delicious and versatile than celery stalks, at least in my opinion. The flavor of celeriac is similar to celery, but milder. It also has a creamy taste.

I use celeriac in all the ways that I’d use potatoes, but get even more flavor from it to boot.

How to prep celeriac (celery root)

This vegetable is a gnarly looking thing. But don’t let those looks fool you. You’ll need to prep the vegetable first before being able to make celeriac hash or any celeriac recipe.

Because of all the knobby bits, it’s hard to peel the root with a simple vegetable peeler. So I peel any smooth areas first with a peeler (if there is a large smooth area at the top of the root vegetable).

Next, I peel / thinly cut off the skin and bumpy areas of the vegetable. Since it’s hard to get in between those bumpy parts, I just snip ’em off.

Now you’re left with a white root vegetable with a smooth surface.

How to make celeriac hash in the oven

Just like potato hash, you can make celeriac hash in a pan, on the stove. But, since I like making a lot of it at once, I usually make it in the oven.

Line a baking sheet with parchment paper, or non-stick foil.

Cut the celeriac root into 1/2 inch cubes. This doesn’t have to be precise, but if the pieces are roughly the same size, they will cook evenly.

Place the celeriac pieces on the baking sheet, along with bacon and other spices. If the bacon you use is quite salty, you will need to be mindful about how much you season the hash.

Bake the celeriac pieces along with the bacon, until the bacon is crispy and the hash is caramelized. To make sure it gets evenly roasted, toss the celeriac hash a couple of times on the baking sheet. This also ensures that the bacon fat gets distributed well.

Which type of bacon I use to make celeriac hash

I use thick cut bacon in this recipe, so that it can withstand the roasting.

If you only have regular bacon, then I recommend adding the bacon halfway through the roasting time. You’d also need to add just a little bit of oil to the celeriac. This is to make sure the celeriac is at least lightly coated with a fat so that it starts to become crisp before the bacon is added.

You can add any type of leafy green to this hash. The cook time will change depending on the leafy green that you use.

There are two options to cooking the swiss chard,

I used swiss chard here, but you can use other options such as,

Adding leafy greens is optional, but they do add a lot of nutrition and fiber to your celeriac hash.

I love eggs, so it’s a no brainer for me to serve this with a fried egg or even a poached egg!

Can I make this vegetarian / vegan?

Replace the bacon with mushrooms, and use coconut milk or almond milk instead of the cream.

This truly is an incredibly flavorful alternative to potato hash.

It’s also lower in carbs and healthier than potatoes. And I love the peppery, mild celery flavor. This celeriac hash recipe is also very easy to make, since you can make it in the oven.

I also often double the recipe and freeze the extra, so that I’ve got leftovers ready for breakfast or brunch another day! 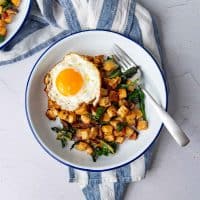 Author: Dini K.
Yield: 2 generous portions
Cuisine: American, North American
Earthy, sweet, oven roasted celeriac hash with crispy bacon and garlic greens is the one celeriac recipe that you must make! Incredibly flavorful breakfast or brunch for any time of the week. Plus it's gluten free and freezer friendly too.EASY – This is an easy recipe. Celeriac is a fairly uncommon vegetable, but can be used the same way other root vegetables are used. This is a great recipe to introduce this vegetable to your family.
Prep: 20 minutes
Cook: 45 minutes
Total Time: 1 hour 5 minutes
Difficulty: Easy
Servings: 2 generous portions
Print Rate

Cooking the Swiss chard in the oven

Cooking the Swiss chard on the stove

Course:Breakfast, Brunch
Cuisine:American, North American
Keyword:Bacon, Breakfast, Celeriac, Freezer Friendly, Gluten free, Hash Recipes, Make ahead breakfasts, Savory Breakfast
Did you make this?Tag me on Instagram!I love seeing what you’ve made! Tag me on Instagram at @TheFlavorBender or leave me a comment & rating below.