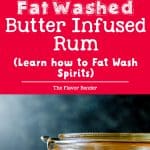 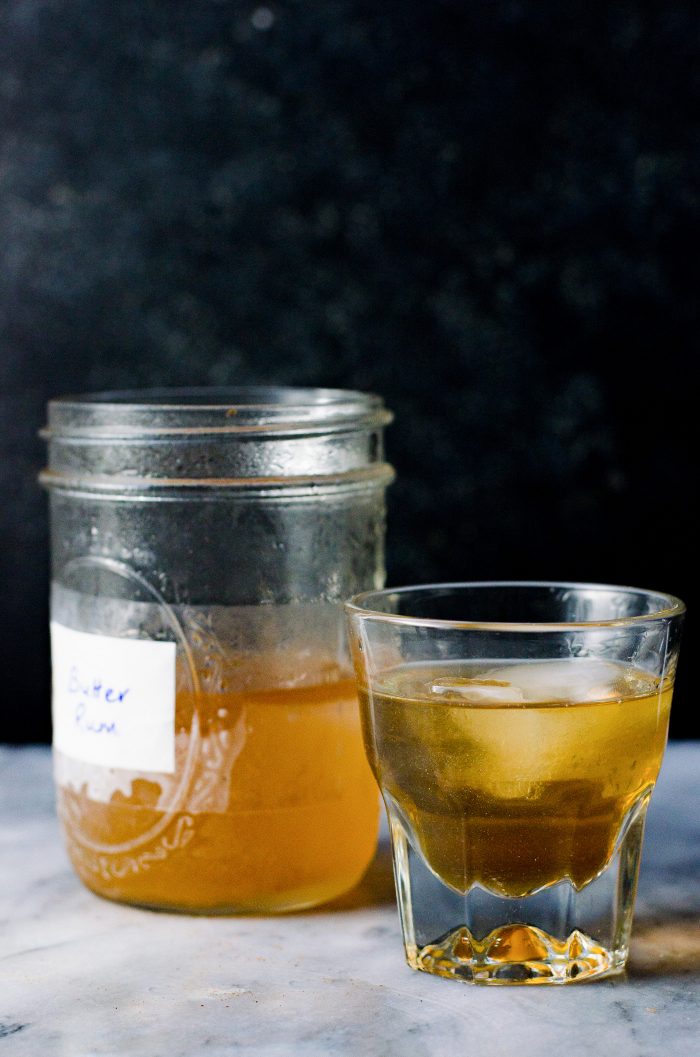 Have you guys heard of fat washing alcohol before?

It’s quite popular among bartenders, and is a really great way of infusing flavor into alcohol. Specifically, it’s a technique to infuse fat-based, usually savory flavors into alcohol. It’s pretty awesome and life-changing if you ask me! 🙂

There’s plenty of information out there about fat washing alcohol and I did quite a bit of research, but I couldn’t fine a reliable way to fat wash alcohol with butter. I tried different techniques, but only one resulted in a clear spirit.

I have also tried fat washing alcohol with different kinds of fats. Butter and bacon are obvious choices and I had great results, but I’m still trying to figure out peanut butter (imagine peanut butter flavored vodka? yum!). Bacon was my first attempt and I tried it with vodka and bourbon which I’ll be sharing on the blog soon! Bacon is easy because you can easily turn it into pure melted bacon fat. Butter on the other hand required a few attempts for me to get it right. Now I’m trying to get PB right. 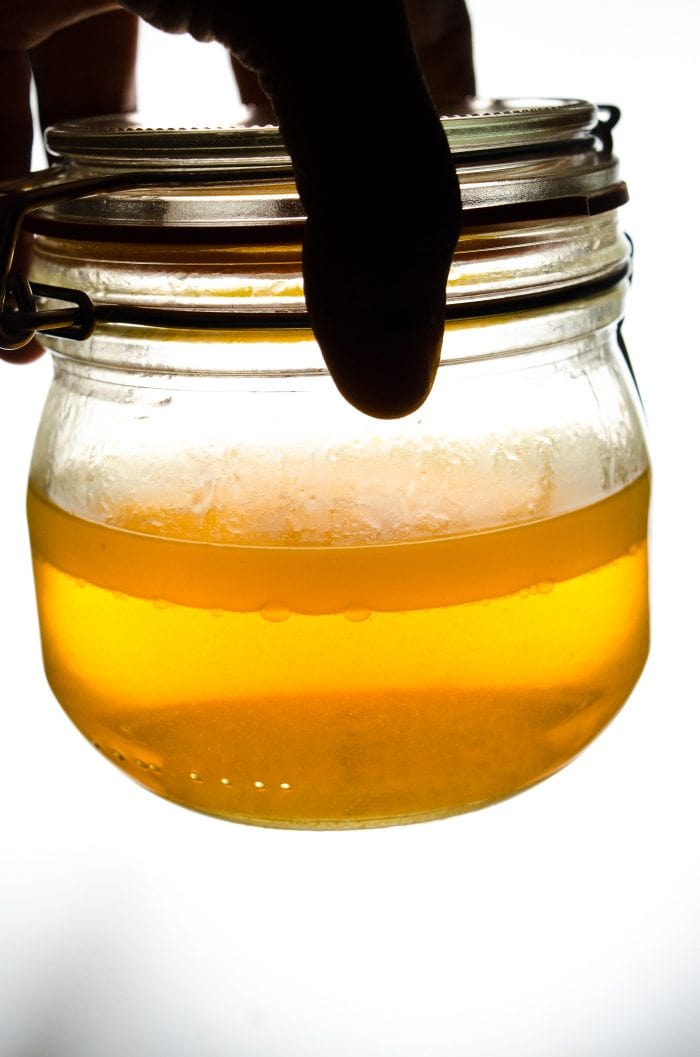 There are 3 stages to fat washing:

I tried different techniques, and three techniques in particular to get a clear rum spirit that still had a great buttery taste. Some techniques out there resulted in a very cloudy rum spirit (which was still delicious by the way), which could still be used to hot buttered rum, warm rum punches or some select cocktails. But I wanted a beautiful clear rum with the flavor of butter. I tested these techniques multiple times to make sure I could replicate the successful results.

I melted the butter and rum together using EXTREMELY gentle, indirect heat (i.e. double boiler) because I didn’t want the alcohol to evaporate. Then I kept it in the freezer so that the layers separate and the butter hardens, and later strained the rum.

The result? Deliciously buttery, BUT cloudy rum. The butter didn’t quite freeze in a solid disc shape either. It was harder to strain.

I melted the butter in the microwave/stove top until just melted and then poured it into the rum. I didn’t overly mix it, just swirled the butter around. Then it was frozen and strained.

Result? Still buttery, but cloudy. But less cloudy than the first technique.

So both these techniques gave me cloudy rum, which isn’t what I wanted. It’s still really delicious though and works well for cocktails that don’t need to be clear.

BUT, that was when I realized that the melted butter still had milk in it (Duh!). The melted milk and liquid were causing the rum to become cloudy because they dissolved in the alcohol and didn’t freeze. So I couldn’t strain it out. So I was left with milk mixed rum.

SO, I heated the butter to the point where the liquid has evaporated and the milk solids have separated, so that I can extract pure fat from the butter.

Here I melted the butter over the stove (to the point where all the liquid had evaporated and I was left with butter fat and the solids), then added this to the rum and froze. Then strained.

Result? Buttery (but not as buttery as the first two techniques), AND CLEAR RUM!

Note – Once you melt the butter, if you add ONLY the fat (without the milk solids), you get the clearest result with a mild creaminess.

If you add the milk solids as well as the fat to the spirit, then you will end up with a slightly cloudy rum, but with a creamier taste.

I used a coffee filter to strain the spirit so that any solid fat / milk solids were strained out as well. With the last two techniques, I got most of the butter frozen solid which made it easier to remove it. Any remaining butter can also be strained out easily using a coffee filter. AS AN ADDED BONUS, if you heat the butter until the milk solids turn brown (brown butter), this will add an even more intense buttery flavor to your rum, which is very highly recommended eventhough the rum will be very slightly cloudy! 🙂

The possibilities with this fat washed butter rum are truly endless! You can use this technique for Spiced rum too!

I’ve made butterscotch liqueur with this fat washed rum and let me tell you, it’s absolutely bonkers! 🙂

This is also the base for my absolutely amazing GOLD SHIMMERY LIQUEUR! The recipe for that will be up on the blog next week! 🙂 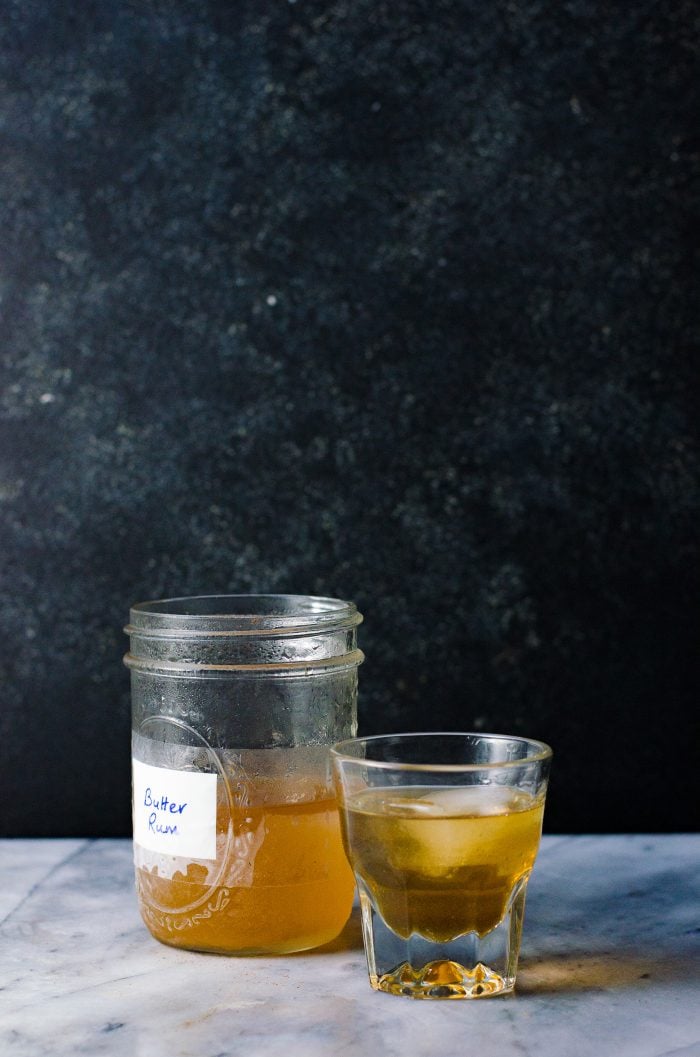 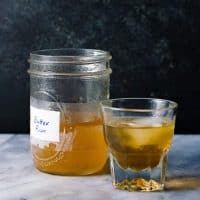 Here are some Rum cocktails that you can make using this Butter Rum.

The Spiced Rum Negroni from Nomageddon

Cuban Manhattan from Hostess at Heart

If you liked this recipe for fat washed butter rum (fat washed alcohol), don’t forget to subscribe for new (and free) recipes by entering your email address on the side bar (and get all these recipes delivered straight to your inbox), so you don’t miss out on a thing. You can find me on FACEBOOK, TWITTER,INSTAGRAM,  PINTEREST, YOU TUBE and GOOGLE-PLUS too.