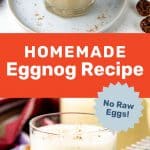 Homemade eggnog tastes so much better than store-bought, and it’s not hard to make either. This homemade eggnog recipe is creamy, thick, and delicious, and it’s also free of raw eggs. Simply omit the alcohol for a family friendly version.

Creamy, frothy, and thick eggnog recipe that everyone will love, and is simple to make.

I love eggnog. But it did take me a few years to truly appreciate it. While I don’t mind eating raw eggs in raw cake batter or raw cookie dough, the idea of drinking raw eggs isn’t as appealing (I lay blame for that squarely on the Footrot Flats movie from my childhood).

But ever since I tried Alton Brown’s eggnog recipe with the cooked option, I couldn’t keep away from the stuff. Homemade eggnog is just fun, and the fact that there are no raw eggs makes it safer to drink as well.

What is the classic eggnog recipe?

The egg milk base and alcohol are mixed at a ratio of 2:1 or 1:1. The high alcohol content in the drink prevents the eggnog from going bad by acting as a preservative. But that much alcohol in a drink like this can also be a bit too strong.

In this version, the egg yolks are cooked in the milk base. And instead of raw egg whites, I use pasteurized egg whites from a carton.

The leftover egg whites can be stored away for a separate recipe.

I also use fresh nutmeg, which is ABSOLUTELY worth it for your eggnog.

A mixture of milk and cream (just like other recipes) to add extra creaminess. But I’ve also made this with half and half, or with evaporated milk – all giving excellent results!

I also use a mixture of bourbon and rum to spike my eggnog. This is optional, but highly recommended. Allow the eggnog to rest for at least 12 hours – it’ll make a huge difference.

If you prefer a non alcoholic homemade eggnog version, simply omit the alcohol. But if you can find rum extract or brandy extract, then you can still add the flavor of alcohol, WITHOUT actually adding alcohol.

The result is a,

How to make cooked homemade eggnog (without raw egg)

Heat the milk in a saucepan over medium low heat, with the salt, cinnamon and nutmeg. The milk should be heated until steaming and just starting to simmer. Do NOT let it boil, so keep an eye on it.

While the milk is heating, beat the egg yolk and sugar with a whisk, in a medium bowl, until thick and pale. It should have a thick ribbon consistency.

Heat the milk egg mixture until it reaches 160 degrees (160 F / 71 C), while whisking frequently. The mixture should be steaming, but not boiling.

Stir in the whipping cream (35% fat), vanilla, bourbon, and rum, and then refrigerate until chilled (or at least room temperature). I prefer to refrigerate this homemade eggnog mixture for about 1 day (at least overnight).

I add the egg whites on the day I’m going to serve the eggnog. This is optional, but I do prefer the drink with the added egg white. It balances the thick creaminess of the drink with a light frothiness.

To do this, in a large bowl, whisk the pasteurized egg whites until soft peaks. Then mix the egg whites into the chilled eggnog mixture, and it’s ready to be served!

Why do you add the egg whites just before serving?

I love my eggnog with that delicious frothiness you get with the egg whites. It feels luscious and light at the same time.

So I add the egg whites just before serving.

However, I have added the egg whites much earlier and still enjoyed the drink for up to 4 days. The flavor is just as amazing!

Can I drink the eggnog right away?

Once you add alcohol, the eggnog tends to taste MUCH better the following day, in my experience. A minimum of 12 hours in the fridge allows the strong alcohol notes to mellow out and mix in well with the eggnog flavor.

If you’re making the non alcoholic version, then feel free to drink it as soon as the eggnog has cooled down. Just add some ice to your glass to chill it further.

Some prefer to pour the homemade eggnog through a sieve to get rid of the extra spices, but I prefer to keep ’em in there. But feel free to filter out the spices before adding the egg whites if you prefer.

To serve, simply pour the eggnog into glasses. Or over ice.

I also like to add a dollop of whipped cream sometimes.

And a sprinkle some ground nutmeg and cinnamon on top is absolutely essential for me.

My husband sometimes pours a shot of espresso into his eggnog to make an iced eggnog latte. Tastes absolutely delish.

This is a super easy recipe that makes an incredibly delicious eggnog. Here are some tips to help you make the best eggnog drink, that is also safe to consume. 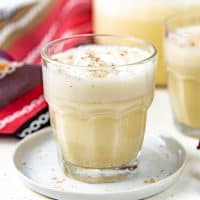 Yield: about 2 L (with the alcohol and egg whites)
Cuisine: American, North American
Creamy, frothy, and thick homemade eggnog that everyone will love! No raw eggs, simple to make, and much better than store-bought! Kid friendly substitutes included. EASY – This recipe is very easy to make even for beginners. You will require a thermometer to measure the temperature of the milk mixture. US based cup, teaspoon, tablespoon measurements. Common Measurement Conversions. Weight measurements are recommended for accurate results, when provided.
Total Time 12 hours 45 minutes
Difficulty Easy
Serves 8 cups
Prep: 30 minutes
Chilling time: 12 hours
Cook: 15 minutes
Print Rate

Once chilled (or before serving)

For a non alcoholic version

Omit the alcohol, and add extra milk instead, along with some rum and cognac (or bourbon) extract if you prefer.