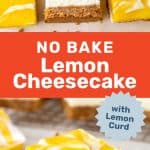 Delicious no bake lemon cheesecake bars that taste creamy and tangy, with swirled lemon curd on top! Easy to make and beautiful to serve.

The only No Bake Lemon Cheesecake Bars recipe you’ll need!

I LOVE citrus desserts, and this is one of my favorites.

An easy recipe for no bake lemon cheesecake. A buttery graham cracker base, topped with a creamy, lemony cheesecake base. And then for some extra jazz, they are topped with swirls of bright lemon curd.

I am usually a fan of baked cheesecake. As evidenced by my Secret Layer Cakes cookbook. I find that no bake cheesecakes are too much like cream cheese mousse, which I do not like. Which is why I came up with this recipe for no bake cheesecake that is still light, but has the same dense, creamy texture of regular cheesecake.

Components of this no bake lemon cheesecake bars recipe

The crust mixture is then pressed into the bottom of an 8 inch or 9 inch square pan. The crust is then kept in the fridge until chilled and hardened.

You also have the option of baking the crust for about 10 minutes, if you’d like a crispier crust. I don’t usually do this, so it’s entirely optional.

If you don’t have access to graham crackers, you can use digestive biscuits. Biscoff cookies are also a good substitute, but they will yield a more distinct flavor than the more neutral graham crackers or digestives.

The ingredients you’ll need to make this no bake lemon cheesecake filling are,

How to make the lemon cheesecake filling

Much like a baked cheesecake, the filling is made by whipping cream cheese and sugar together, with the lemon and flavoring.

Quickly whisk the bloomed and melted gelatin into the cream cheese base, along with the whipped cream.

The small amount of whipped cream makes the no bake cheesecake lighter, without making it taste like a mousse. Although gelatin is used to set the no bake lemon cheesecake mixture, I only use just enough for the filling to set. So it’s not going to have a jello-like texture.

It adds a wonderfully tangy sweetness to the cheesecake bar. Plus those bright yellow swirls are pretty!

This is the only component that requires cooking, but it’s very easy. I promise!

The lemon curd is made by cooking a mixture of lemon juice, sugar, cornstarch, and water. Then the egg yolks are mixed in, and thickened further. Finally, a mixture of bloomed gelatin is melted in the hot lemon curd mixture.

Allow the lemon curd mixture to cool down to room temperature, and then swirl it through the cheesecake layer, BEFORE refrigerating the whole pan.

Once the crust is chilled, the freshly made cream cheese mixture can be evenly spread on top.

The lemon curd mixture may set a little as it cools because of the gelatin. But don’t worry, just whisk it to make it smooth again, and pour it over the surface of the cheesecake layer.

Use a knife or spatula to swirl the lemon curd layer into the cheesecake layer. You don’t want to go too deep, just have the swirls close to the surface.

Finally, once everything is assembled, refrigerate the no bake lemon cheesecake overnight.

How to get clean cuts in your cheesecake

If you just cut into your lemon cheesecake without any precautions, you may find that the cuts are quite rough. But this is easily preventable!

Storing the no bake lemon cheesecake for later

These slices can be stored in an air-tight container for up to 5 days in the fridge. Make sure the cream cheese and cream that you use are fresh and won’t expire very soon.

I haven’t tried to freeze this no bake cheesecake though. Freezing could have an effect on the cream cheese / heavy cream and the gelatin, causing it to weep as it thaws out.

Lemon is my favorite flavor after chocolate. So I find these lemon cheesecake bars to be pretty irresistible!

And of course it’s super easy because there’s no baking involved. It’s a great recipe to make with kids (as long as there’s adult supervision when making the lemon curd).

It’s simple enough for a family dessert, but impressive enough for a dinner party too. Those lemon curd swirls are a total winner!

And the beautiful contrast of the buttery crust, the creamy cheesecake layer, and the tangy curd, makes this a perfectly balanced dessert in terms of flavor.

The texture of this no bake lemon cheesecake is still very similar to a baked cheesecake. It’s not like a mousse, but creamy and a little dense like a cheesecake is supposed to be. Just the way my family and I love it! And I hope you like it too. 🙂 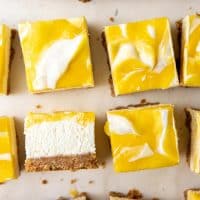 Crust (needs to be frozen for at least 3 hours)

Note about the lemon curd

Note about adding gelatin to the cheesecake base

Course:Desserts, No Bake Dessert, Sweets
Cuisine:American, North American
Keyword:Cheesecake, Citrus, Lemon Curd, Lemons, No bake desserts
Did you make this?Tag me on Instagram!I love seeing what you’ve made! Tag me on Instagram at @TheFlavorBender or leave me a comment & rating below.