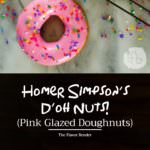 An easy and complete tutorial on how to make Homer Simpson’s absolute favourite snack – these fun, pink glazed doughnuts with sprinkles (The Simpsons Doughnuts) – with perfect results, every time!

Here’s another doughnut update – in my quest to make perfect doughnuts every single time, I put together this detailed post right here with plenty of tips and tricks and things to look for, if you too would like to make amazing, deep-fried doughnuts at home! One of the most well-known families in the world for the past 25 years is without a doubt the Simpsons! I remember watching them when I was growing up and I still love the show. I love the couch gags! I even owned the Simpsons Album on Cassette tape

23 and sang along to Do the Bartman. A couple of months ago when the FXX channel advertised the #EverySimpsonsEver (The Simpsons marathon where they aired every single episode since the beginning, non-stop over a 12 day period) I was doing cartwheels in my head. AND  there was more exciting news to come. My favourite animated family (The Simpsons) and my husband’s favourite animated family (Family Guy) were going to do a crossover episode! That’s 60 minutes of pure animated sitcom heaven and it airs in less than a week! (Sept. 28).

I hope you will get to celebrate America’s favourite animated family by making these amazing LARD LAD Simpsons doughnuts! I made these in time to watch The Simpsons marathon last month, but honestly, do you really need an excuse to have these any other time of the year? A beautiful dough that’s not too sweet or oily, soft and airy inside and a bright beautiful glaze on top! Yep, that my friends is the perfect doughnut. So naturally, I had to replicate this at home with my own recipe for simpsons doughnuts.

My first batch came out fine, but not perfect. I still coated them with cinnamon sugar and froze them to use later for other desserts (which I will talk about later).  My second batch was perfect! Absolutely perfect!

I made the doughnut dough the night before and after the first rise, left it in the refrigerator overnight. I cut about 10 doughnuts that were about 3.5 – 4 inches in diameter, but you can cut it to your preference. Check at 30 minute intervals to see if the dough has risen properly. If it rises too much, it will collapse when you lightly poke it. If you poke and the indentation stays, then you’re good. I ate a doughnut hole a few minutes after it came out of the fryer – you know, for taste control purposes… – and it was crispy on the outside and so fluffy on the inside with NO OILY RESIDUE! Yep, I was a happy gal! The glaze had to be a bright pink with the most colourful funfetti sprinkles for these simpsons doughnuts. However a chocolate glaze would have been decadent too. The glaze also had to be thin enough to be able to pour on top, but thick enough to spread slowly and set on the sides. You can use a spoon to spread the glaze on top, or just dip the doughnut in the glaze for a neater glazed top.

Next the sprinkles went on top while the icing hadn’t set completely yet.

Don’t these look amazing? Although you can’t see it, I enjoyed one right away with a nice hot cup of coffee! Even my husband wanted to come home early from work just to have one. Who could blame him? 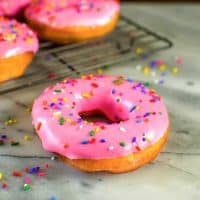 Storage - doughnuts are best eaten on the same day or the next day, refrigerated.
If you have too many doughnuts, freeze them without the glaze, then thaw them out later to eat with whatever glaze you like.
Did you make this?Tag me on Instagram!I love seeing what you’ve made! Tag me on Instagram at @TheFlavorBender or leave me a comment & rating below. A tip when you are frying these Simpsons doughnuts – it’s very important to keep the oil close to 375°F. I did this with my thermometer. A piece of bread dropped in would brown in 10 seconds and not burn if it is at the right temperature. If the oil is too cold the doughnuts WILL ooze oil when you take a bite. I guarantee it. If it’s too hot, the outside will burn too quickly and it will be raw in the middle. So be careful. Don’t overcrowd the fryer either as this will lower the temperature greatly. Now that you have a recipe in hand go ahead and make these fun Simpsons doughnuts this week. Heck, why even wait? Do it tonight so you can have some an awesome snack tomorrow. They are absolutely worth it. They are so soft and fluffy inside and perfectly sweet that you would want to make these again and again.

Remember to subscribe for updates on the blog with your email below or right at the top of the sidebar. Another amazing Simpsons dessert recipe is coming up later this week. So you may want to stay tuned for that.

For all you doughnut aficionados out there – here’s a delicious Coffee Doughnut with Caramelized White Chocolate Pastry Cream filling! If you liked this Simpsons doughnuts recipe, don’t forget to subscribe for new (and free) recipes by entering your email address on the side bar (and get all these recipes delivered straight to your inbox), so you don’t miss out on a thing. You can find me on FACEBOOK, TWITTER,INSTAGRAM,  PINTEREST, YOU TUBE and GOOGLE-PLUS too.