For a long time I wasn’t confident enough to make my own doughnuts even though I love eating them. That changed, after I ate this amazing Simpsons doughnut at Universal Studios in LA (of all places!), and once I got back home I absolutely wanted to replicate it. And I did. It was the best decision ever. Well, maybe one of.

I’ve made them a few times now, with different variations, but it’s been too long since I’ve featured one on the blog. So I decided to put things right. Being a caffeine addict, it was no surprise when one day not too long ago, the idea came to me while having my morning coffee. Coffee doughnuts (or Coffee donuts)! After all, millions upon millions enjoy a warm cup of joe with a doughnut every morning, correct? So why not integrate the two for a true coffee fan’s delight? Enter, Glazed Coffee Flavoured Doughnuts with Caramelized White Chocolate Pastry Cream Filling! 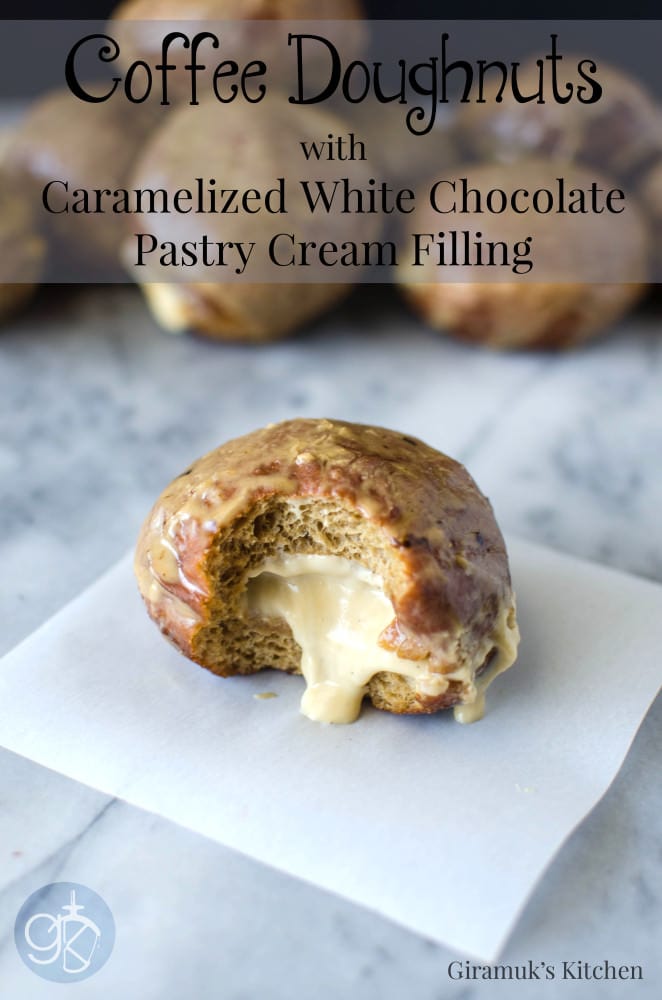 Making your own doughnuts/donuts can seem a little daunting at first, but having made them several times already, I can tell you that it’s actually really easy. I’m here to show you how and maybe convince you enough so that you’d want to make a few right away! 🙂

I’ve been to a few fairs and carnivals as a kid which was always really exciting. Apart from the rides, the games, the attractions, the open theater, little stalls with merchandise, what never failed to excite me was the mini doughnut stand! You guys know what I’m talking about right? The ones with the doughnut machine that drops little circles of batter through this funnel shaped device into hot oil which then travels down this oil tank where they get flipped over and then covered in powdered sugar and finally gets served to you in a brown paper bag? For a seven year old kid, that whole process was pure magic in action.

As far as making your own doughnuts go, I feel like they’ve gotten a bad rap as being something difficult to make. It may be because of the need to deep fry them, or maybe because you’re working with a dough (as opposed to a batter), but I’m here to tell you that you need not fear anymore! 🙂 While I have nothing against baked doughnuts (in fact I do love eating those too), they are just not as satisfying as a fried doughnut with a crispy outside and a light and fluffy inside. Yes, it takes a little longer to make them than baked ones, but to me it’s worth it, at least once in a while. And if they are made properly, they aren’t oily at all.

These doughnuts are just fantastic with a strong hit of coffee flavour and the sweet and salty creme patisserie (pastry cream) filling. They have a thin coffee glaze (you can make it thicker if you like) too, because hey, these are coffee doughnuts and I’m not holding back! The doughnut itself isn’t sweet, but the glaze and the pastry cream filling give it that indulgent sweetness that makes it perfect with your morning coffee or even as dessert!

Flavour – These doughnuts are made with 1 tbsp of instant dry yeast. This may seem like a lot, but it ensures that the dough rises well, especially in the refrigerator, and gives the doughnut that characteristic flavour we all love.

The overnight rise is preferable for developing flavour. Much like my favourite pizza dough, the cold rise of any yeasted dough lends characteristic flavour to the doughnut, that the “warm place” rise just cannot replicate. Why? A cold rise slows down the process of yeast growth, allowing the yeast to develop a deeper flavour as they grow and multiply. On the plus side, it also makes the dough easier to handle.

It’s important to incorporate the butter properly too. You could possibly melt the butter and add it in a stream while kneading, but the method I’ve described in this recipe is what works best for me. I love the way the dough turns out and feels this way. Why change something that works right? Kneading while adding the butter distributes the butter evenly through the dough.

You can roll out the dough and cut out circles, or doughnut shapes. In this recipe, I simply divided the dough more or less equally in to 20 rolls. When you cut out doughnut shapes, you end up with scraps. These scraps can be re-rolled (after a one hour resting time in the fridge) and then cut, once. You want to cut out as many as you can from the first roll, because the 2nd re-roll is harder to handle, and can end up being thicker than your first batch (due to over handling and the dough not resting enough). So re-rolling a second time is not really ideal. To avoid that I try to use up as much of the remaining dough scraps to make doughnut holes instead! 🙂

Knowing when the doughnuts are ready to be fried – The second proofing usually only takes 1 hour at 72°F- 75°F (22°C- 25°C). However, if it’s summer and it’s hot, it might take a little less time, and in winter, a little longer.

Underproofing – leads to stiffer (or denser) doughnuts with low volume.

Cracked Doughnuts – If you used a cutter, it may not have been sharp enough to cut the doughnuts cleanly. Or the dough is underproofed or too cold.

Balled up doughnuts (applies mostly to cut doughnuts) – If the dough has not had time to rest (especially doughnuts cut from the second re-roll) they tend to shrink in width (not height) and ball up when frying.

After I leave the doughnuts to rise (covered with plastic wrap), I check on them after 30 minutes and then every 10-15 minutes. Check the first doughnut you cut out/roll up and lightly prod/press it.

If the cut dough starts to deflate  – It has over proofed, and will need to be re rolled, and re-chill the doughnut dough for at least an hour (to rest).

If the doughnuts have been made, rested and proofed correctly, frying is the next step.

Importance of using shortening that’s heated to the right temperature

If you use oil that is at the correct temperature (~190°C) the oil does its job, and then when the doughnut is being drained, the excess oil gets drained out, so no oily residue!

Using oil/shortening that is too hot results in doughnuts that have a raw center, or burnt doughnuts (or even both). We don’t want that either! 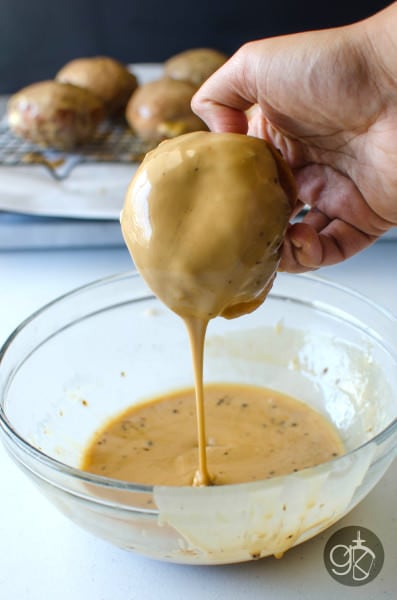 Another tip for frying – You want the doughnut to float in the oil/shortening. Since only half of the doughnut gets fried at a time (due to buoyancy only one half will be submerged in the oil), you might be tempted to shallow fry it (with less oil). Please don’t do that! Make sure there is a good amount of oil allowing the doughnuts to float freely while cooking.

I find it easier to maintain the temperature of the oil when there is a sufficient amount of it, and this prevents uneven heating and results in evenly browned/cooked doughnut.

If you are only glazing the doughnuts, you don’t have to wait till the doughnuts have cooled completely. Once they are cool enough to handle, you can go ahead and glaze your doughnuts. But if you’re filling them as well, I prefer to let them cool first, then fill them and finally glaze them.

The glaze tends to protect the doughnut from drying out too quickly. They are best eaten the same day they are made, but are still great the next day. They are so-so on the third day, by which time you could probably consider making doughnut bread pudding instead? That tastes amazing too! 🙂

So are you ready to make some doughnuts?? If you do have any questions, please leave a comment below and I’ll be at your service. 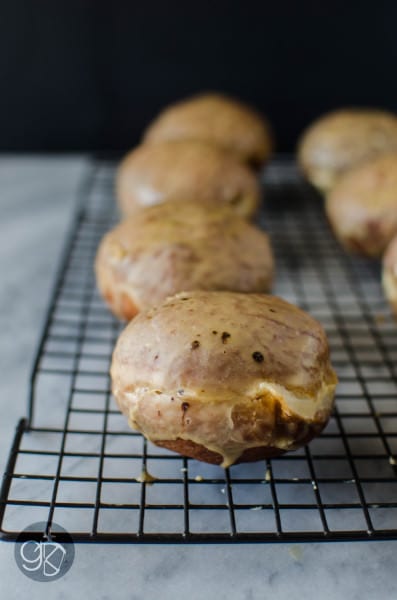 You will need 1 recipe of the Caramelized White Chocolate Pastry Cream for this. Find out how to make it here. 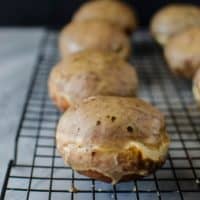 Author: Dini K.
This recipe was a result of my experimentation. I started with the recipe I came up with my Simpsons Doughnuts, and went from there.
Servings: 20 medium or 30 small doughnuts
Print Rate 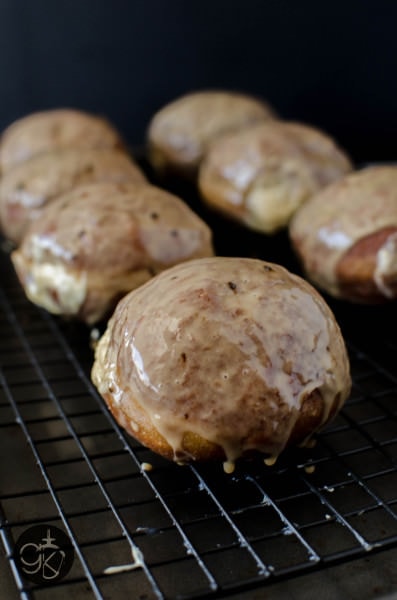 Whether you call ’em coffee donuts or coffee doughnuts – they are incredible! 🙂 The coffee flavour is present throughout, but the frosting/glaze really kicks it up a notch with a little added sweetness too. I added that extra bit of sugar to the dough (compared to my Simpson’s doughnut), because the addition of coffee tends to make the dough taste slightly bitter. The doughnut itself was cooked perfectly. That crispy exterior and soft, light inside… 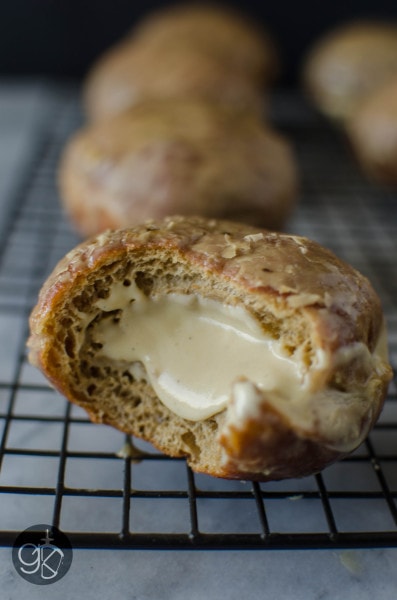 How about a coffee doughnut with a cup of hot chocolate? 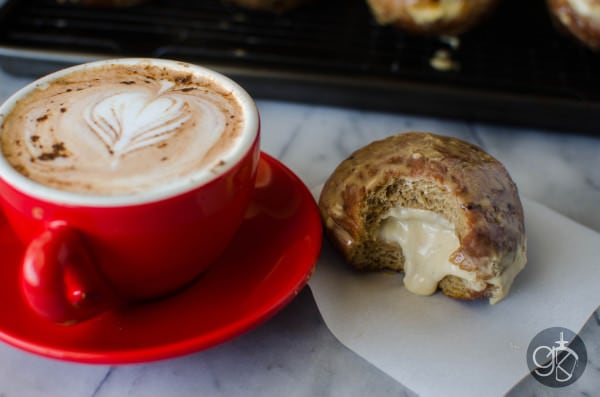 No? Just a cup of coffee then? (below is a picture of one of my doughnuts from a different batch, with a thicker glaze – that coffee was made without a milk frother by the way) 🙂

Or just on its own? It’s your doughnut, so do with it what you will!

If you liked this recipe don’t forget to subscribe for new (and free) recipes and updates by entering your email address below (and get all these recipes delivered straight to your inbox), so you don’t miss out on a thing.

You can find me on FACEBOOK, TWITTER, INSTAGRAM, PINTEREST and GOOGLE-PLUS too. I share pictures of  recipes to come on the blog plus other awesome recipes I find out there that I want to try. So I hope you do stop by and say hi! 🙂