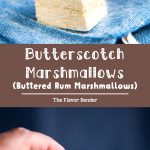 Soft, fluffy, buttery, with a hint of salt – these Butterscotch Marshmallows (or Buttered Rum Marshmallows for adults) are just so decadent and addictive.

Butterscotch marshmallows are great for gift-giving, or to enjoy with a mug of creamy hot chocolate! 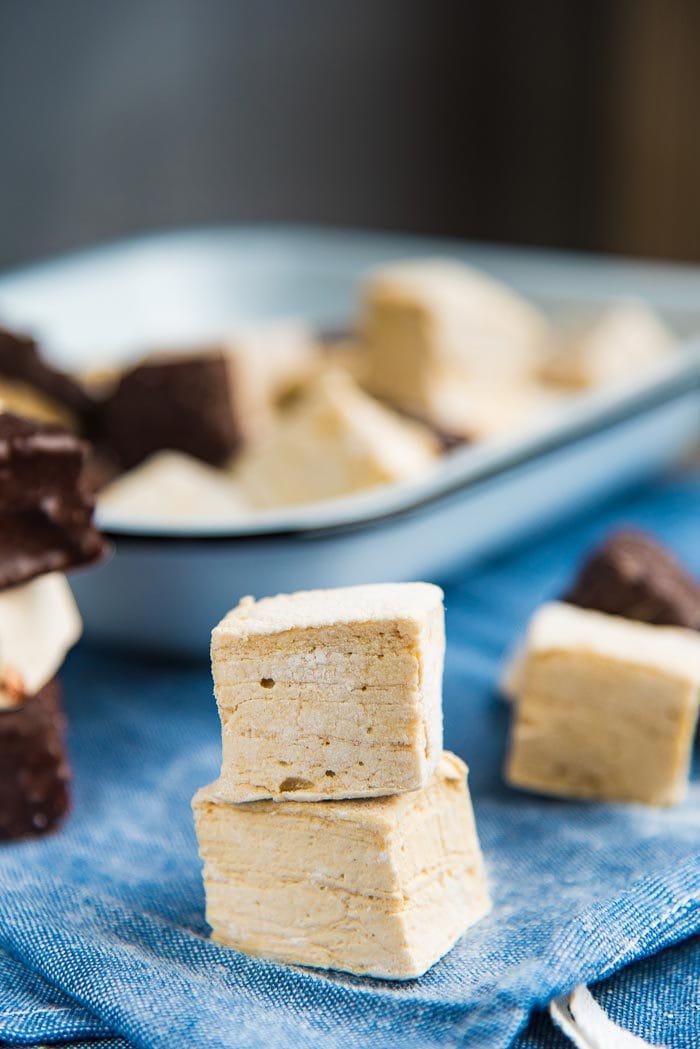 These fancy pants Butterscotch Marshmallows are my absolute favorite! That’s saying something considering how much I like to make marshmallows. But these are buttery, sweet, fluffy and all around decadent. They also go by different names…

No matter what you call them though, these are a real treat!

These butterscotch marshmallows are different from the classic marshmallows that I first made, but the basic technique remains largely the same. So I do highly recommend reading that post for all the troubleshooting tips, if you’d like to know more about making homemade marshmallow. 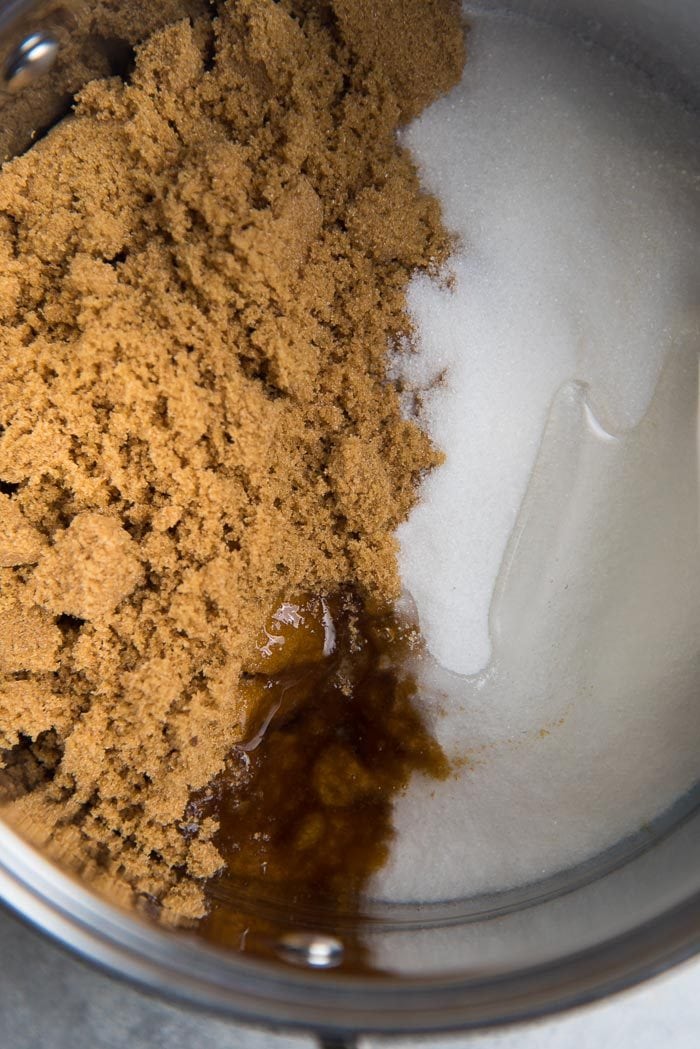 The first step to making butterscotch marshmallows is the sugar syrup.

The sugar is dissolved in water (or water and rum for buttered rum marshmallows) while being heated over medium – medium high heat. Remember to swirl the pan to get the sugar to dissolve. Then once the sugar is dissolved, and the mix has come to a boil, place the lid over the saucepan and let the sugar syrup simmer over medium low heat for a couple of minutes. The condensation on the bottom of the lid will help wash away any undissolved sugar crystals on the side of the pan back into the syrup so they can fully dissolve.

Then when you take off the lid, clip the sugar thermometer and heat the sugar syrup over medium – medium high heat until it reaches 242 – 245°F. If you’re living in a humid environment, then I recommend heating the sugar up to 245°F.

Again, remember to swirl the pan gently so that you evenly distribute the heat throughout the syrup. Often times there can be hot spots on your saucepan or syrup, which can affect the marshmallow.

While the syrup is cooking, you can get everything else ready. HOWEVER, if this is your first time making marshmallows or you’re not 100% comfortable with the process, then I’d recommend you keeping a close eye on the sugar syrup to prevent it from overcooking. 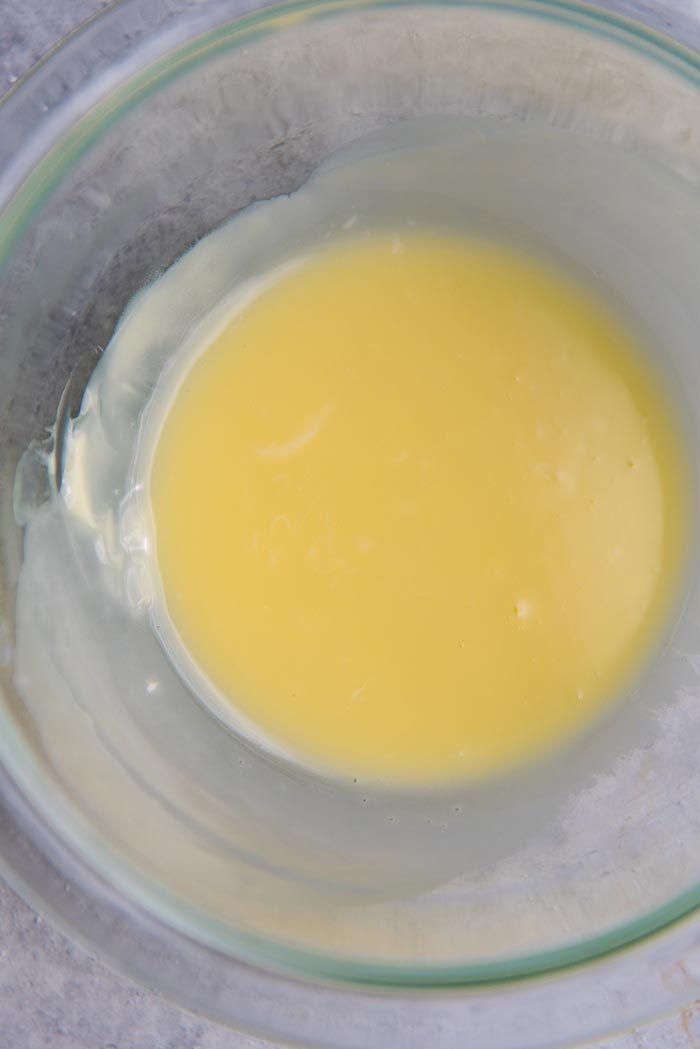 Place the unsalted butter in a microwave-proof bowl and melt for just a few seconds until just melted. You don’t want the butter to boil or separate into fat and water. I usually microwave it for 10-15 seconds (room temperature butter), until most of it is melted. Then I remove the bowl from the microwave, and stir it until all the butter has melted in the residual heat. Then set it aside to cool down. The butter shouldn’t be too hot when mixed in with the marshmallow. but it also needs to liquid so that it can mix easily.

While the sugar syrup is cooking, you can get the gelatin ready. Here you’ve got two options,

While the gelatin is blooming, prepare all the utensils and pans that you’ll be using for the marshmallows. 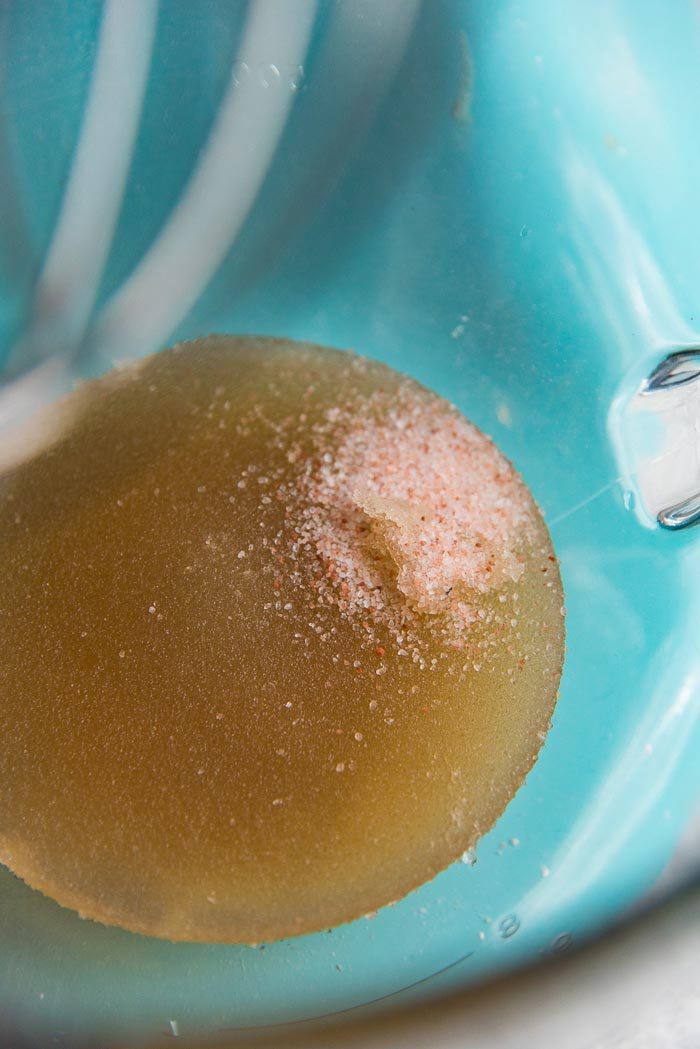 Making marshmallows is easy. But it’s a sticky business. That’s why it’s important to coat all the utensils you use with a layer of butter. I’m using butter here because these are butterscotch marshmallows after all (or buttered rum marshmallows). But you can use shortening for this purpose too.

Coat the spatulas and mixing spoons with a thin layer of butter too.

Once the sugar syrup has reached the right temperature, you’re ready to making butterscotch marshmallows!

Add some salt to the bloomed gelatin in the mixer bowl. Don’t forget the salt because it really balances out the sweetness. Not a lot, just a pinch. But if you like SALTED butterscotch marshmallows, then you can add a little more.

Either choice is OK.

And then pour the marshmallow base into the prepared pan, and let it set overnight. Then they can be cut, dusted or dipped before being devoured! 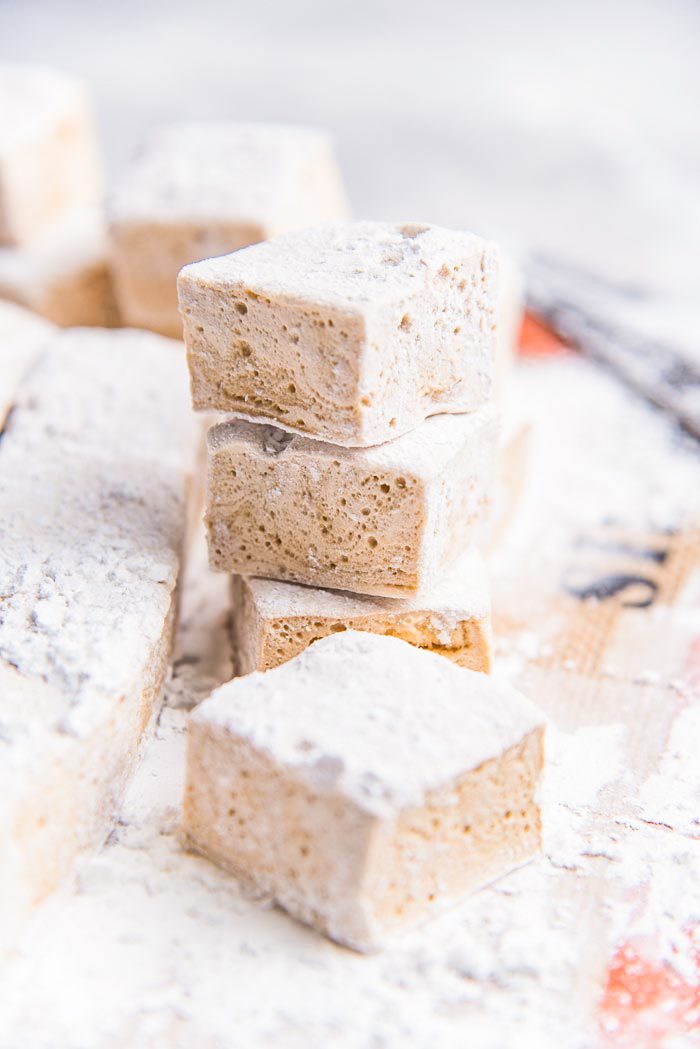 You can coat these butterscotch marshmallows (butterbeer marshmallows) in chocolate as well (with added pop rocks for some extra popping magic – like the ones pictured here in the post). There’s really no wrong way to enjoy these buttered rum marshmallows – they are incredibly soft and fluffy, buttery with a hint of salt, and just so addictive. Great in hot chocolates, or to make s’mores! 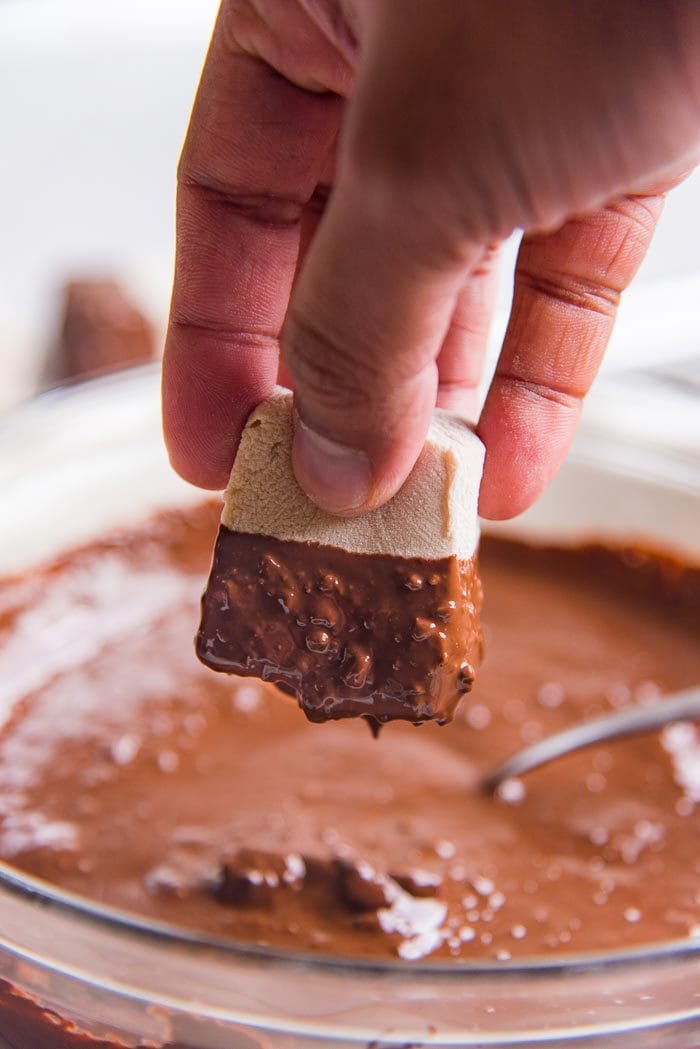 If you liked this butterscotch marshmallows recipe (buttered rum marshmallows/butterbeer marshmallows), don’t forget to subscribe for new (and free) recipes by entering your email address on the side bar (and get all these recipes delivered straight to your inbox), so you don’t miss out on a thing. You can find me on FACEBOOK, TWITTER, INSTAGRAM,  PINTEREST, YOU TUBE and GOOGLE-PLUS too. 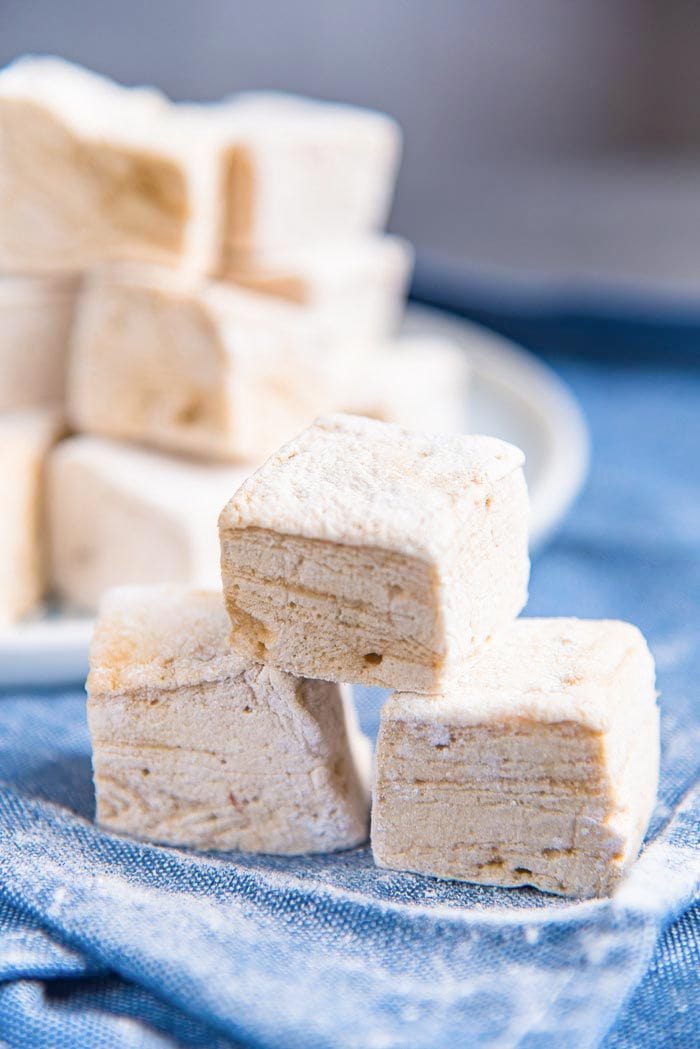 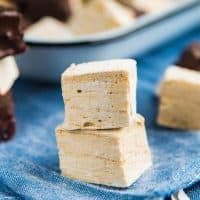 For the gelatin bloom