Crispy on the outside and deliciously meaty on the inside, coated with a spiced “egg wash” and a spiced cilantro salt, and then served with a vegan aioli dip made with roasted eggplants, these Baked Vegan Mushroom Fries with Vegan Aioli are an incredibly flavourful twist on a classic, that’s perfect as a party or game day appetizer or even a complete meal! Have I told you guys about my mission to get my husband to eat meatless meals? Not for any other reason other than to prove him wrong when he says that he can’t think of a great meal without meat or fish. 🙂 I do like eating meat, just as much as I like my veggies. I’ve been exclusively vegetarian for periods of time in the past, so I know I could easily slip back into it if I wanted to, as long as I have some variety of veggies and really great flavour! Especially flavour. So I made it my mission to feed him some vegetarian and vegan meals and see if he’s ready for a change of heart. And to that end, these Cilantro and Ginger Mushroom Fries with Vegan Aioli (made with roasted eggplant) were an absolute home run! 🙂 Crispy and baked to a golden brown on the outside and so deliciously meaty on the inside, you won’t even miss the meat with these mushroom “fries”, and they are dangerously addictive. So much so that I barely get to try them when I make these, because my husband practically inhales them! And they are vegan to boot. Mission accomplished. It’s not the first time I have surprised him into a fantastic meat free meal. Just recently we had these Spinach and Mushroom Polenta Stacks that were so flavourful and comforting. So was this delicious Roasted Eggplant Caponata with Pasta. Here are some ideas for substitutions you could make –

These portobello mushroom fries are vegan. I used a coconut milk, chia seeds and spice mix to coat the mushroom slices. But I have also made these with regular milk, spices and an egg mix too. So if you don’t want them vegan, you can use a regular egg mix instead. And that aioli. SO SO SO SO freaking GOOOOOD! Even if you’re not vegan, you should try it like this with roasted eggplant. It’s like a creamy Babaganoush and I know you’ll love it too. But if you choose not to heed my advice, you can serve these mushroom fries with regular mayonnaise or your favourite dip (vegan or otherwise). We had these with my best spicy sweet chilli sauce!

I used panko crumbs to coat them because they always give such beautifully crispy results, but you can use gluten-free breadcrumbs if you’d like to keep these gluten free. I have tried these vegan mushroom fries both baked and fried. So you always have the option of frying them too. They are just as crunchy and crispy baked as well, so you won’t go wrong with the healthier option of baking them. You might not even notice, but this meal gives you TWO MASSIVE helpings of two different vegetables (per person). Mr K made these a complete meal with a salad on the side, which means any meat lover out there would enjoy these without ever missing the meat. I used a spiced vegan “egg wash” and a spiced cilantro salt to coat these vegan mushroom fries which gave them such an irresistible flavour. If you’re entertaining vegan guests, these would perfect as a snack for parties or as a game day appetizer, or even a complete meal. 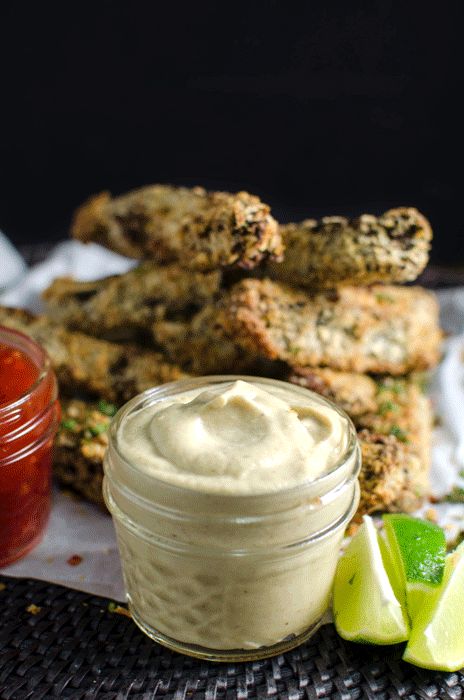 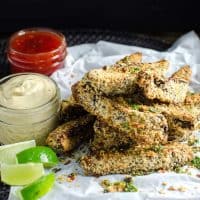