So it was my birthday, a couple of weeks ago! And that’s why, the cake today. Usually when I make a cake (whether it’s for a birthday, a special occasion or just for the heck of it) I spend a little time making it look pretty. But this time, the flavours were just so awesome, I let them be the star. It’s a bummer that I cannot prove to you just how amazing this cake tasted, but I hope you do take my word for it. 🙂 The focus was all on flavours and I brought together some of my husband’s and my favourites in this Chocolate Peanut Cake with Caramel Peanut butter Nougat Filling & Chocolate French Buttercream.

Yep, I know it’s a mouthful. I tried to come up with a clever little name for it, but I guess I wasn’t clever enough. So what do we have here?

–   An amazingly soft, delicious Chocolate Cake (recipe from Sweetapolita)
–   A very peanutty, crunchy, chewy Peanut Daquoise layer (recipe adapted from Cook’s Illustrated)
–   A beautiful filling/layer I made with Salted Caramel Buttercream and a whipped Peanut Nougat
–   And a rich, creamy Chocolate French Buttercream to cover all that indulgent awesomeness!

Does that sound a little over the top? If so, that’s exactly what I was going for! It’s a birthday cake after all. So in the spirit of all things celebratory, why not top it with a crown of Peanut Caramel shards too? 🙂

Unfortunately the birthday weekend weather wasn’t too kind to me. We were stuck at home with snow and ice outside which kind of messed up our plans a little bit.

Regardless, I still find birthdays a lot of fun! Especially those of my loved ones. I can’t do much for my parents’ or my little sister’s birthday at the moment because they live half way across the world from me, but I did make this super fun red velvet cake with blue ombre crusting cream cheese frosting and hand-made Avengers cake toppers for Mr. K’s birthday last year! The presents are fun, the cards are fun, the cake is fun. The one thing I don’t like about birthdays though is that I get an year older. I swear, the Earth has picked up its speed of rotation in the last few years or so. There’s no way time is the same as it once was! 🙂

You know what else puts a damper on birthdays in my opinion? Facebook! Ha! Everyone knows your birthday now (although mine isn’t visible on my profile anymore). Yikes! So once a year, your wall (do they still call it that?) gets flooded with wishes from people that you won’t hear from again for another 365 days (and yep, I’m one of them too! haha). I used to have this really complicated system (i.e. write them down somewhere and make an effort not to forget) whereby I remembered the birthdays of friends and family. And then I’d send them an awesome, sometimes cheesy wish. I’m not as great with it now, but I still make an effort. But with the advent of Facebook, those wishes don’t quite feel genuine often times now unfortunately. Or is that just me? 🙂

And if there isn’t a cake, I refuse to accept that it’s my birthday. It’s the one day of the year where I can convince myself adequately that I can have just cake for breakfast, lunch and dinner. This cake started off as a wannabe Snickers cake. I didn’t quite like the idea of adding just peanuts, so I made a Peanut Dacquoise instead. It’s chewy, it’s crunchy and it has a rich peanut flavour. I also didn’t feel like having a gooey caramel layer in the middle either. I tried this homemade Snickers nougat layer, and found it too sweet and it also set too hard so it wasn’t spreadable for a cake. So after a few tries, I was able to achieve the consistency I liked, and then whipped it with my favourite caramel frosting to get a deliciously creamy, slightly salty, caramel, nougat and peanut butter flavoured frosting. Helloooow!

I love eating French buttercream, but I don’t make it often. It’s quite a rich (hence super tasty, obviously) frosting, which is why I used it here just to cover the cake. I used my recipe for this, but I adopted the “Swiss” way of making it which makes it safer to eat (after reading about it on The Tough Cookie), which I should add, is nothing short of a stroke of genius! 🙂 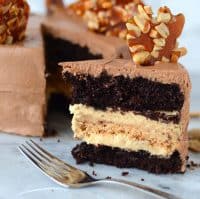 Chocolate Cake (recipe is from Sweetapolita, I simply scaled it down for this cake)

NOTES FOR FRENCH BUTTERCREAM - In The Tough Cookie tutorial, Nila recommends keeping the mix at this temperature for about 10 minutes to make sure there is no risk of Salmonella. This is a great way to prepare the frosting if it’s going to be served to toddlers or pregnant women or the elderly. If you are not too worried, you don’t have to maintain the mix at this temperature for 10 minutes, you can remove it from the heat once it reaches the temperature, and proceed from step 3 of the Buttercream recipe.
Did you make this?Tag me on Instagram!I love seeing what you’ve made! Tag me on Instagram at @TheFlavorBender or leave me a comment & rating below. I only used one dacquoise layer for the cake, but you’re more than welcome to use both. I love how it makes the center of the cake a little chewy and crunchy. It blends in with the frosting too and is a lovely surprise of texture and rich peanut flavour when you dig in.

You can also easily double either of the filling recipes while omitting the other. They both taste equally amazing on the cake. I wanted to try them together however and I’m very glad I did!

This cake is truly a celebration of rich flavours. It has a Snickers vibe going for it, though it’s not a Snickers cake. However if you like Snickers, you will love this cake. Guaranteed! What’s your favourite candy bar that you wish you could have in cake/dessert form?

If you liked this recipe, don’t forget to subscribe for new (and free) recipes and updates by entering your email address below (and get all these recipes delivered straight to your inbox)!

You can also visit me on FACEBOOK, TWITTER, INSTAGRAM, PINTEREST and GOOGLE-PLUS too. I share pictures of  recipes to come on the blog plus other awesome recipes I find out there that I want to try. So I hope you do stop by and say hi! 🙂