I have known Mr. K for over 13 years now, first as a friend who eventually became my husband, and we have spent only a fraction of that time in the same country. Last month was the first time in a long time that we were in the same place on his birthday! So naturally, I wanted to make him a birthday cake that he would truly love! My idea was to combine as many of his favourite things as I possibly can in one cake. It seemed daunting in my head at first but the birthday boy sure deserved it! So I thought about it. Made a quick list of the things he would love to see on his cake. Worked on it for a few days. Aaaaaaaand…. the final result was this gloriously delicious Red Velvet Cake with Cream Cheese Frosting! Not just any cream cheese frosting, but Blue Ombre Crusting Cream Cheese Frosting! Oh and to customize it even further I threw in some his favourite Avengers in the form of hand-made cake toppers. Yep, you guessed it, he absolutely loved it! 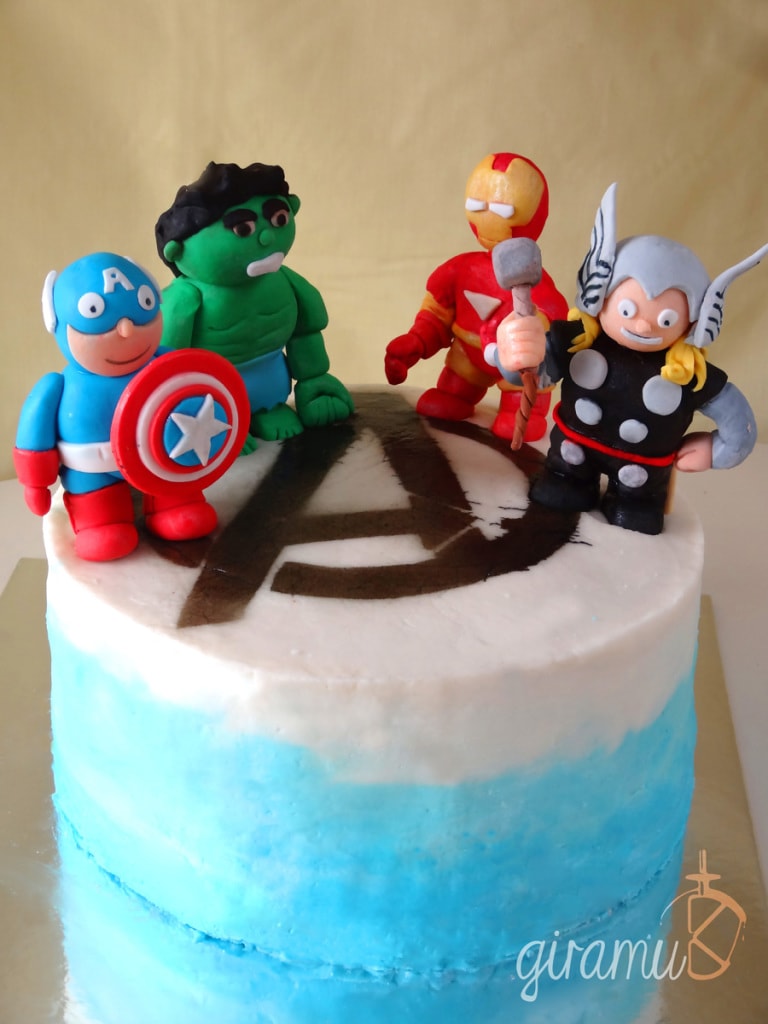 The first thing I did was the Avengers figures as I needed time for them to dry out. The first time I made fondant figures was a few years ago when I made an Angry Birds cake for my mum’s birthday. These Avengers however were quite a bit harder. I started out with the Hulk as he’s Mr. K’s favourite Avenger and finished up with Captain America. They weren’t perfect but I definitely think I got better at it with each figure and you can probably see it in the finished items too, with Thor and the Cap being the last two I did and looking neater than the other two. Consequently the Cap was my favourite of the figures! My focus though was the cake itself and the fondant figures were just a quirky addition. 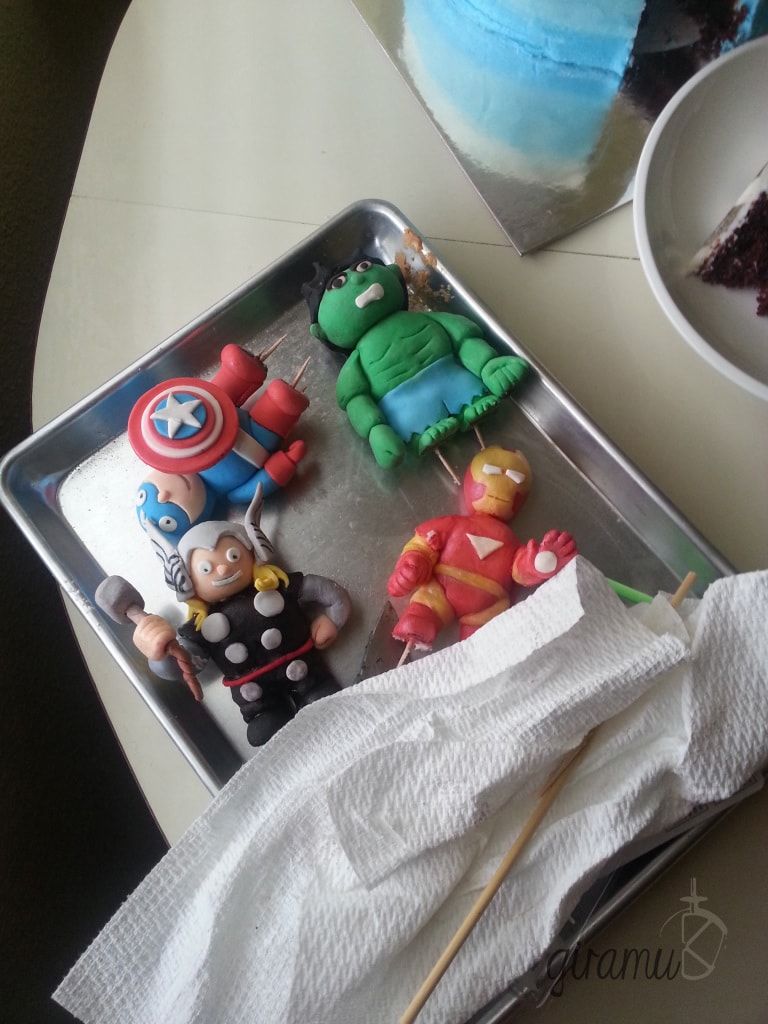 This post/recipe though is specifically about the Ombre crusting cream cheese frosting. I know a lot of people aren’t ecstatic about the taste of fondant in cakes and Mr. K is the same. So if you’re faced with a similar situation where you need the look of fondant but not the taste, the next best thing is crusting frosting. It looks just like fondant and dries out and “sets hard” on the outside (hence called crusting) and you can use a spatula or your smoothing tools with a Viva paper towel or parchment paper to smooth it out. This crusting frosting is made with Shortening. The fact that Shortening stays solid at room temperature means the frosting crusts well and remains sturdy at room temperature as well (unlike butter) which is why it works well in crusting frosting. In fact buttercream that is all shortening or a mix of butter & shortening withstands warmer weather quite well.

However I personally do not like the taste of Shortening in buttercream at all. It leaves a film of fat in your mouth when you eat it which is less than desirable to say the least. So I used a minimal amount of Shortening, just enough to achieve the crusting, and made a crusting cream cheese frosting which tasted amazing! I also added shades of blue that blended into each other (Ombre). It all worked out well because Mr. K is a big fan of red velvet cake, and cream cheese frosting and red velvet cake are a match made in cake heaven!

As for the red velvet cake, I used Smitten Kitchen’s recipe with slight modifications. I admit living in New Zealand and Australia, I was not very familiar with red velvet cake and the first time I tried making it… well, let’s just say the end result probably could have made it to a trailer for the worst cooks in America show. It tasted like soap! This time however I used Deb Perelman’s wonderful recipe and I knew it wouldn’t let me down! And it didn’t! It was perfect in every sense of the word and tasted wickedly delicious! 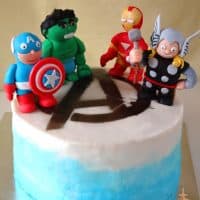 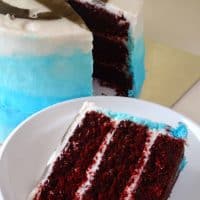 This was actually my first time making crusting frosting, so naturally I was a little nervous. The end result wasn’t too bad and I was very happy with it. So was my hubby by the way, although he’s not one to fuss over technicalities like crusting frosting. As far as he was concerned this cake had it all. Red velvet? Check. The Avengers? Check. The Hulk? Check. Blue frosting? Check. Delicious? Big Fat Check! 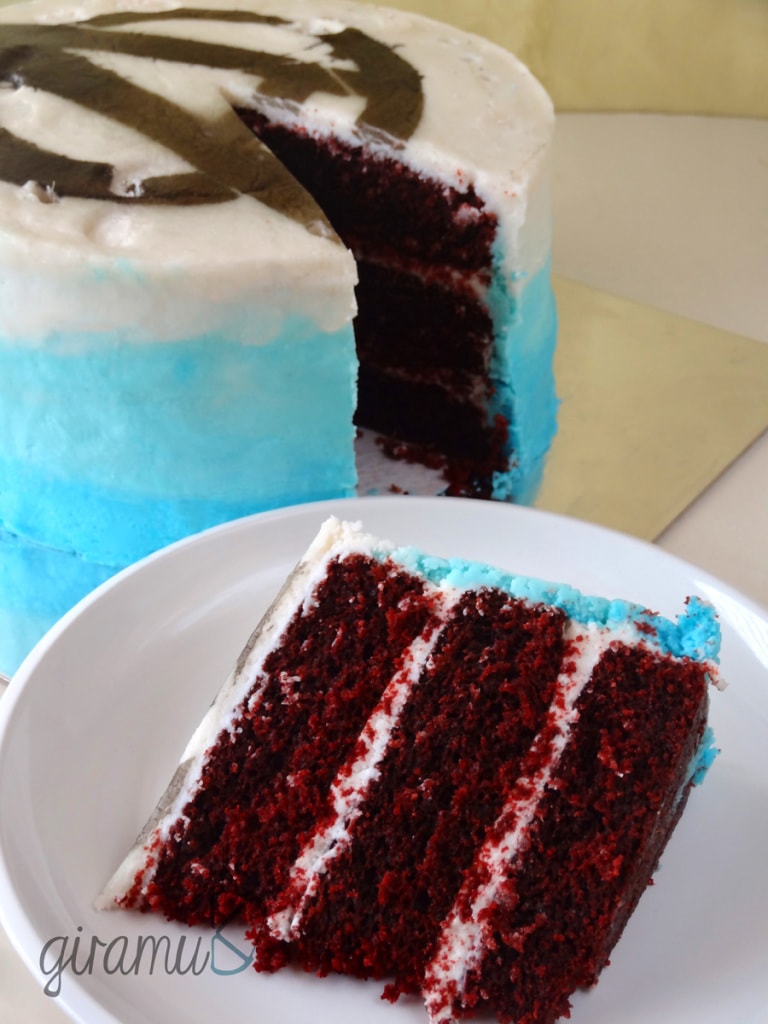 Next time I make this frosting though, I might reduce the amount of confectioners sugar and see if I can still achieve the same level of crusting. It was still deliciously creamy though with the distinct taste of cream cheese coming through. If you can’t find unpatterened Viva towels for smoothing the frosting, you can use parchments paper, and if you can find neither, use a hot straight-edged cake smoother/spatula.

I even spray painted the Avengers logo on the cake which turned out to be a little too big as the fondant superheroes covered part of it when they were placed on top. Mr. K didn’t mind though. For him it was all a portal back to his childhood, a shout out to the boy who enjoyed the comics and the cartoons and for a day he was not just a kid at heart but in soul too.

The cake was incredibly moist and light as well. And most definitely did not taste soapy (YAY!).

His birthday dinner was fantastic too! He specifically asked for my Butter Chicken with a whole chicken (which also meant plenty of leftovers!), and I also made lentil and potato curries with cooked rice to go with it. All in all it was a great weekend and I think I succeeded in making up for all the birthdays we missed over the years. The one problem I have now though… I’m not sure I’d be able to top this next year!

So what’s your favourite cake? Mine is most definitely a Chocolate cake which, if you follow my blog, might not come as a surprise at all!

With Friday coming, I will be sharing my recipes on Foodie Fridays and Fiesta Fridays! I always look forward to checking out all the other awesome recipes there too!

In the meantime, you can find me on  facebook, twitter, instagram, pinterest or google-plus  for updates and new recipes from Giramuk’s kitchen. You can also subscribe below (or on the sidebar), and receive new recipes as soon as they appear on the blog.