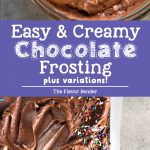 This easy Chocolate Buttercream Frosting is creamy and is packed with deep chocolate flavor without being overly sweet. You only need 5 ingredients to make this creamy chocolate buttercream frosting (and a spoon to eat it!). Plus it’s hassle-free to make because I use cocoa powder instead of melted chocolate.

Chocolate buttercream that is so creamy, fluffy, and soft!

This Creamy Chocolate Buttercream Frosting is SO GOOD that it should legitimately come with a warning. Buttery, fluffy, creamy chocolate buttercream frosting with all the chocolate flavor that you’ll need. It pipes beautifully onto cakes and cupcakes, and is good enough to even eat on its own. 🙂

What makes this Creamy Chocolate Buttercream even better is that you can adjust it to your liking.

I change the amount of cocoa powder I add, to make this chocolate frosting two ways.

Why is this creamy chocolate buttercream the best ever?

The butter for this buttercream frosting should be cool to start with. This is an important step. Usually buttercream recipes call for softened room temperature butter, but I find that if the butter is too soft, you have to add HEAPS of confectioner’s sugar to get the butter stiff enough for piping and creating creamy swirls. BUT, starting with butter that’s cool (not cold) and a little firm, gives you the best chocolate buttercream frosting that’s perfectly sweet, pipeable and swirl-able!

You can also change the consistency of this creamy chocolate buttercream frosting by changing the amount of liquid you add. 1/4 cup of cream is the minimum amount that I add. This obviously adds a creaminess to the buttercream as well. After this initial amount of cream, I add another dose of cream (after I’ve added the flavoring) to get the desired consistency.

If I’m making the sweeter chocolate buttercream, I don’t need to add as much of the extra cream as I would with the dark chocolate buttercream. This also depends on the season and ambient temperature. In the summer, I may not need any more cream because the butter will be softer and I won’t need more liquid to get a softer consistency. But in the winter, I may add the extra cream.

…Or this one bowl fudgy chocolate cake. 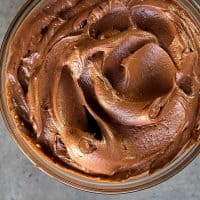