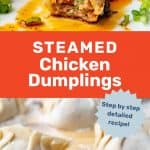 Homemade steamed chicken dumplings can be incredibly comforting and flavorful! Yes, they are a labor of love, but most definitely worth it. And they taste so much better than store-bought frozen dumplings!

Learn how to make steamed chicken dumplings from scratch, with the juiciest chicken filling and silky dumpling wrappers

Since I first shared my homemade dumpling dough recipe in 2014, I’ve upgraded my chicken dumpling filling to be juicier and more flavorful than ever! So here I wanted to share all my secrets that I’ve learned in the last few years in making incredibly delicious steamed chicken dumplings with you.

How to make the best homemade dumpling wrappers

Here are some important points though,

But you can of course make these steamed chicken dumplings with store-bought dumpling wrappers as well!

How to make the juicy chicken dumpling filling

The first rule to making this juicy steamed dumpling recipe is to use a meat with higher fat content. For steamed chicken dumplings, you need to use the red meat like the thigh or leg.

You can use store-bought ground chicken as well. However, I prefer to buy skinless, boneless chicken thighs and make it into ground chicken myself. This can be done with a meat grinding attachment (if you have one), or in the food processor (which is what I used here).

If you’re using low fat ground chicken, mix in some fat to make it juicier. This can be lard, egg yolk, or my personal favorite – sesame oil.

Season the meat. You can add salt and pepper to season the chicken filling, but I also like to add light and dark soy sauce. Just a little sugar also helps to coax out more flavor from the filling.

If you’re adding vegetables to the chicken dumpling filling, substitute about 1/4 – 1/3 of the chicken with finely chopped vegetables. Mushroom, napa cabbage, carrots, water chestnuts are all great options. However, if you’re adding more vegetables, you will need something like an egg or starch to help bind the mixture properly.

Do I need to stir the filling in one direction?

That may seem like a strange question, but the answer is yes! You need to stir the filling in only one direction (either clockwise or counter-clockwise). I’m not sure why this is so, and I’ve never questioned it either.

Whether you’re making pork dumplings or chicken dumplings that are steamed, boiled, or pan fried, it’s important to get the right consistency for the filling.

The filling needs to be stirred in one direction until it has a sticky consistency. Like sausage filling. Stirring the mixture will make it stickier because of the myosin protein in muscle that is released when the meat is ground. When I “grind” meat in the food processor, this happens automatically. That’s because the blades in the food processor agitate the myosin as the meat moves rapidly in one direction. So you can use your food processor to mix the filling for convenience.

Having a sticky filling mixture is important because it helps hold the chicken dumpling filling together when you’re steaming the dumplings. Otherwise, the filling will be crumbly, and that’s not ideal for this steamed dumplings recipe.

How to fill and fold dumplings

You want them to be nice and plump, but also be able to seal the dumpling properly. Too much chicken filling in your dumpling, and it won’t seal properly and will dry out when steamed. You will know how much filling each wrapper can handle once you fold and seal the first few dumplings.

This is an easy way to make your steamed chicken dumplings look more traditional and “fancy” at the same time.

Place the chicken filling in the middle of the dumpling wrapper. If you’re using store-bought dumpling wrappers, you’ll need to moisten the edges of the wrapper to help with sealing. This is not necessary with homemade wrappers.

Fold the dumpling wrapper over and pinch to seal in the middle.

Make 3 – 5 pleats starting from the middle, going out towards one end. Repeat this step to make pleats going in the opposite direction as shown in the pictures below. Make sure there are no air bubbles inside the dumpling as well.

Then press the pleats to seal.

This method of folding and sealing dumplings is SUPER easy. When I want to make dumplings faster, this is how I seal them. The faster I fold the dumplings, the faster I get to eat steamed chicken dumplings, amiright?

Here is a video so you can see how it’s done.

How to store dumplings

Place the pleated and sealed dumplings on a dusted work surface or parchment paper lined baking sheet. Keep the dumplings covered, as you make more.

If you’re planning on making steamed dumplings or pan fried dumplings right away, they can be left at room temperature for about a couple of hours.

However, I prefer to make enough for several meals. So, I freeze the extra dumplings for later.

How to freeze dumplings

Place the dumplings on a lined baking tray. I prefer to use parchment paper, but wax paper is fine as well. Make sure the dumplings aren’t touching each other.

Cover the pan with plastic wrap and place it in the freezer for about 4 hours, until the dumplings are almost frozen (or frozen through).

Place all the frozen chicken dumplings in a freezer bag or air-tight container and store them in the freezer until you’re ready to steam them.

To prevent the steamed chicken dumplings from sticking to the bamboo steamer, I line it with perforated parchment paper. HOWEVER, I love to steam dumplings on lettuce leaves and banana leaves as well! Banana leaves impart more flavor to the dumplings, while lettuce leaves are a great zero waste alternative.

The steaming time depends entirely on the size of the chicken dumplings that you made, and how much filling is inside the dumplings.

Once the chicken dumplings are steamed, they are ready to be eaten! Just a simple dipping sauce of black vinegar and soy sauce is more than enough, but I like to add a little chili oil to my dipping sauce too.

Having said that, these steamed dumplings are incredibly juicy and flavorful, I could eat them by the bucketful without any dipping sauce.

I looooove dumplings. Adore them. If I don’t always have homemade dumplings, then I have store-bought dumplings in the freezer.

These homemade dumplings are just so much better though. That’s just a fact. You can flavor them however you want, and make sure you get succulent chicken dumplings. Homemade dumpling wrappers make these silky and delicate.

Even if you make these with store-bought dumpling wrappers, the homemade filling is bound to make your steamed chicken dumplings extra special!

It is time-consuming, but I make enough for at least 2 or 3 meals. So it’s worth that time and effort I put in. That way you have frozen homemade dumplings in the freezer, that can be ready in less than 30 minutes! 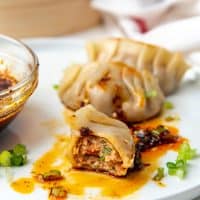 Author: Dini K.
Yield: 33 – 36 dumplings (depends on the size of the dumpling wrapper)
Cuisine: Asian, Chinese, East Asian, Japanese, Korean
Learn how to make the best steamed chicken dumplings from scratch! All the secrets to making a succulent, flavorful chicken filling that doesn't dry out. Make these with homemade wrappers or store-bought wrappers, plus with tips for beginners. So much better than store-bought dumplings!EASY / INTERMEDIATE – This recipe is easy but time consuming. Making large batches is even more worth your time and effort, since these are very freezer friendly. You can make the process easier by using store-bought wrappers. I have included an easy and fast way to seal dumplings, so that you don't have to spend time making pleats. Prep time does not include making homemade wrappers. Please add extra time to the recipe if you're planning on making homemade dumpling wrappers.
Prep: 3 hours
Cook: 30 minutes
Total Time: 3 hours 30 minutes
Difficulty: Easy
Servings: 36 dumplings
Print Rate

Notes on yield and any leftover filling

This recipe makes about 36 dumplings. But of course this depends on how much filling you add to the wrappers, and also how big the wrappers are.  So you can either keep a few extra wrappers with you just in case, OR pan fry the leftover filling and mix it with leftover rice to make fried rice. Tastes like dumpling fried rice!

Notes on freezing dumplings for later

Place the dumplings on a parchment paper lined baking tray (at least a finger width apart), and keep them covered. Then freeze your dumplings on the tray for at least a few hours, until the dumplings are mostly frozen (and hard on the outside).  They can then be transferred into an airtight container OR a ziploc freezer bag. Put these in the freezer until you’re ready to cook them again.

Notes on cooking from frozen

I usually add about 2 minutes to the cook time for frozen dumplings.

Course:Dinner, Dumplings, Lunch
Cuisine:Asian, Chinese, East Asian, Japanese, Korean
Keyword:Chicken Recipes, Dumplings, Homemade dumplings, Jiaozi, Potstickers
Did you make this?Tag me on Instagram!I love seeing what you’ve made! Tag me on Instagram at @TheFlavorBender or leave me a comment & rating below.