So you want to convince someone how much you love them? Or celebrate unrequited love in true Halloween fashion? A bleeding heart should do the trick. This delightfully decadent Raspberry and White Chocolate Lava Cake tastes as delicious as a bleeding heart ever could! 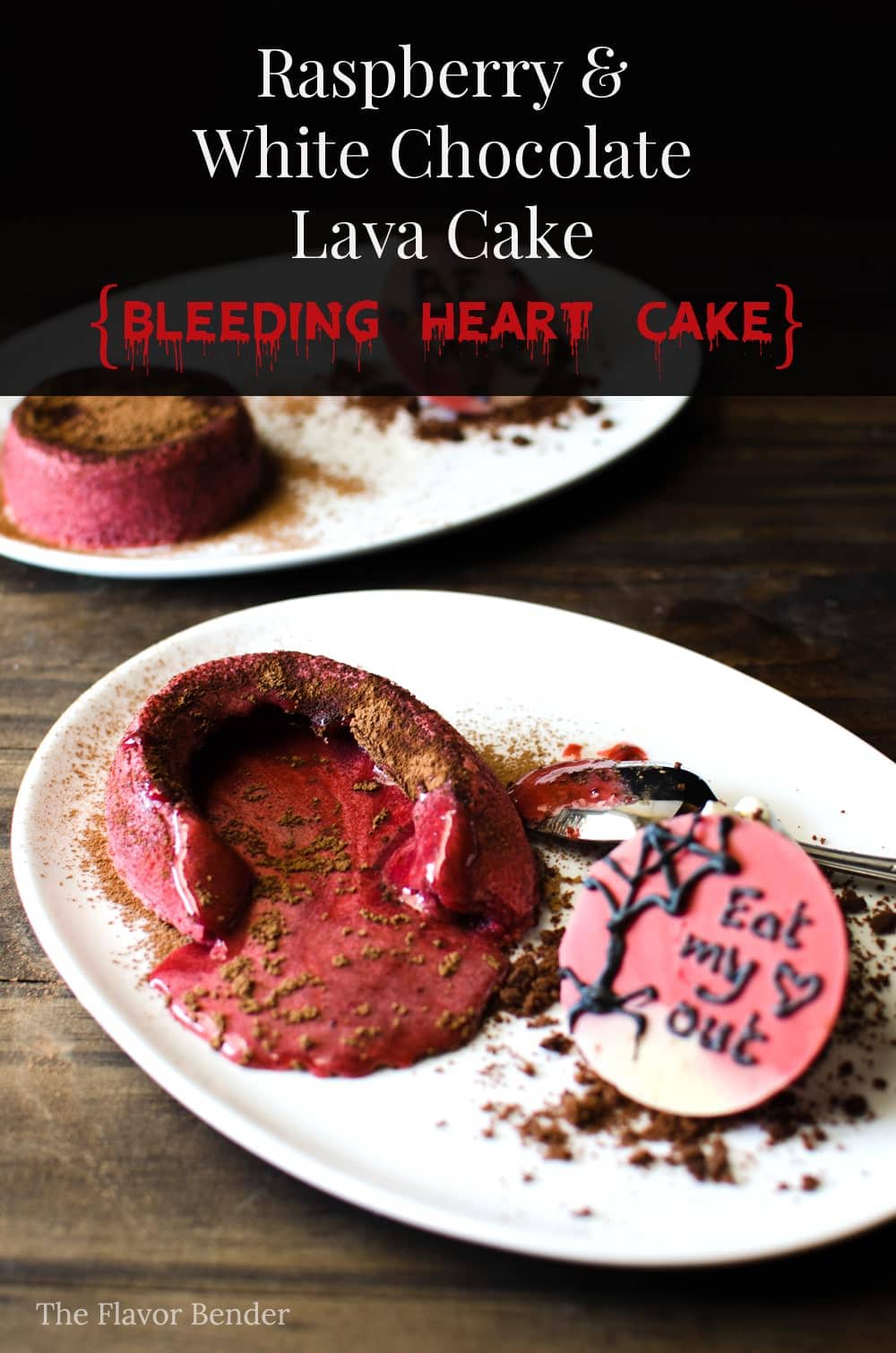 Where has Halloween been all my life? It’s officially my favourite holiday. Except it’s not a holiday. Why is that by the way? Why isn’t Halloween a national holiday?

Growing up in New Zealand and Australia, Halloween was never really a big deal. I mean we do have parties and candy on sale and etc., but costumes and trick-or-treating were never a big part in that culture. And that happens to be my favourite part! Which I guess is because Halloween appeals to the weirdo in me! 🙂 A weirdness that I always embrace and am proud of. And something I will most definitely pass on to my kids one day too, while we celebrate Halloween no matter where we live in the world!

Mr K is hardly any different and that’s totally why we work. And maybe also why we both got excited by the idea of making a deliciously creepy cake for Halloween.

So while this could also work very well for a Valentine’s day celebration, I love that I was able to stay true to my nature, and turn that sentiment into something that worked even better for Halloween! 😀 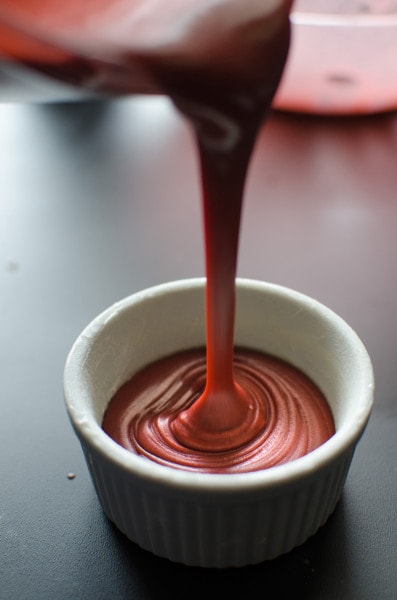 Have you guys heard of the Overly Attached Girlfriend before? You can imagine this as the sort of cake she would make for her man, or woman. 🙂 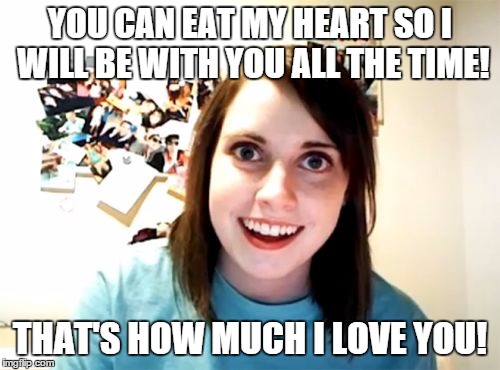 Or if you’re on the other end of the spectrum, and just want to creep your SO out like my girl April Ludgate – this is the right dessert for you! 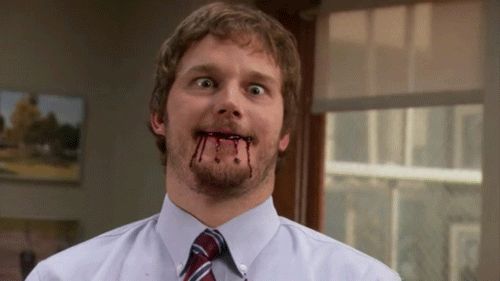 The result – this glorious Raspberry and White Chocolate Lava Cake, aka The Bleeding Heart! We got to eat a few failed attempts in the making of this, since I kept retesting the recipe till I got consistently delicious results that looked both creepy and great at the same time. While I love making chocolate lava cake, making a white chocolate lava cake proved to be slightly more challenging than I expected. Plus I wanted a really healthy dose of raspberry in there too. 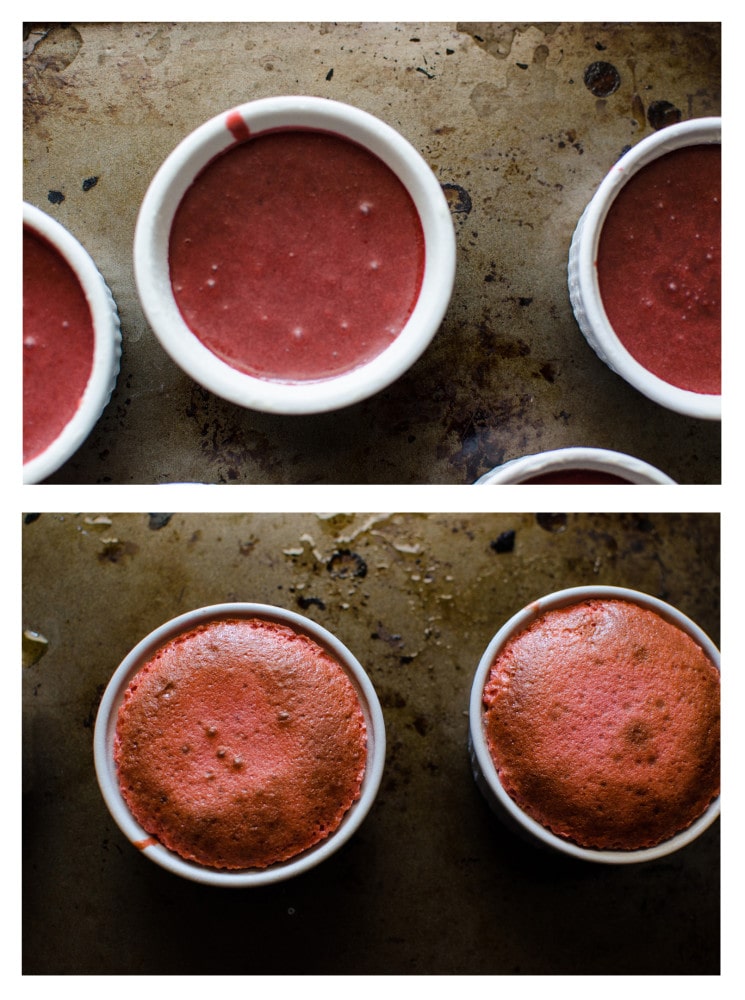 So what I realized was that the addition of raspberry puree and white chocolate made it a little harder to get the desired results in the conventional way of making molten lava cake. Instead, you could think of this as a cheat’s version of molten lava cake where I add raspberry ganache in the middle to replicate the “molten lava” or the “bloody insides” of a bleeding heart cake. This way you get consistently good results. 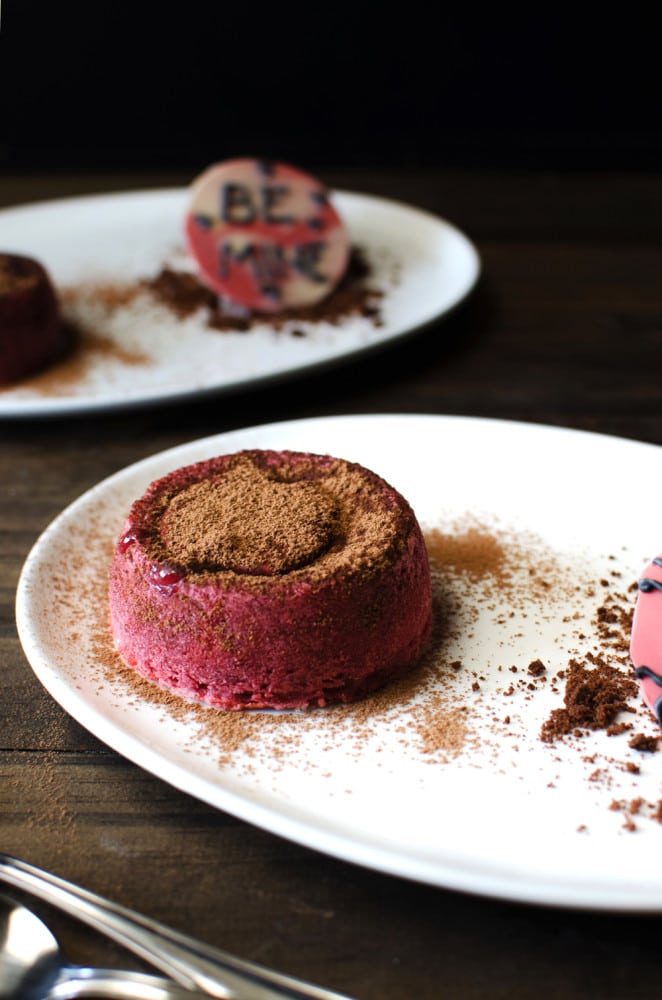 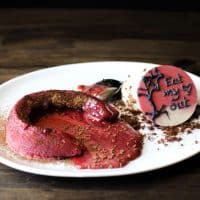 Raspberry white chocolate ganache - you can make this a day ahead if you like. 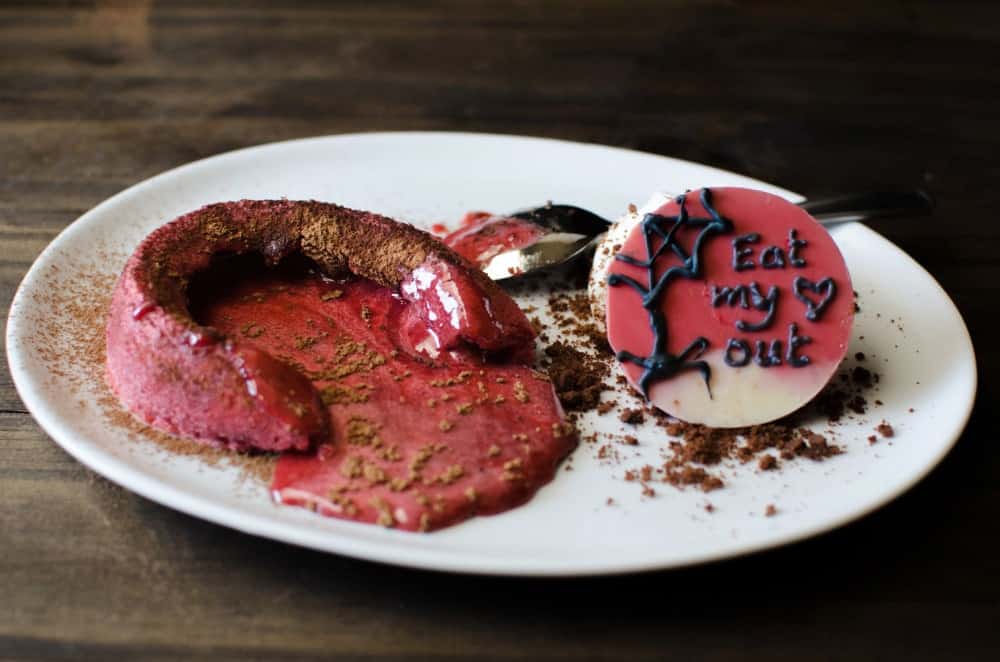 The white chocolate discs you see here are completely optional, but I loved making them. I just tempered white chocolate and coloured 3/4 of it with red colouring powder.

Next I dolloped this with the rest of the tempered plain white chocolate on acetate paper and spread it out to a thickness of roughly 3-5 mm. Once they were set, I cut out circles with a warmed cookie cutter and piped my decoration and message using regular coloured buttercream. 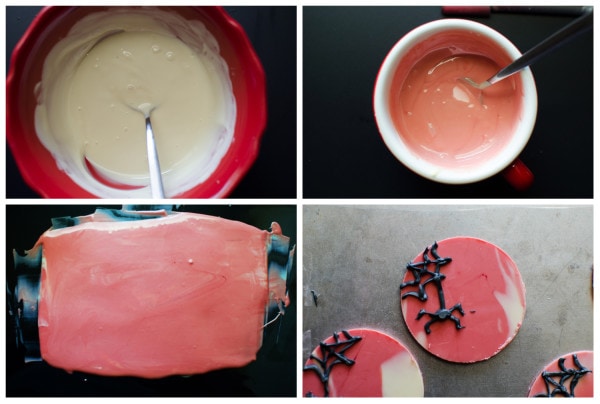 And you can pipe whatever message you want on those discs too. 🙂 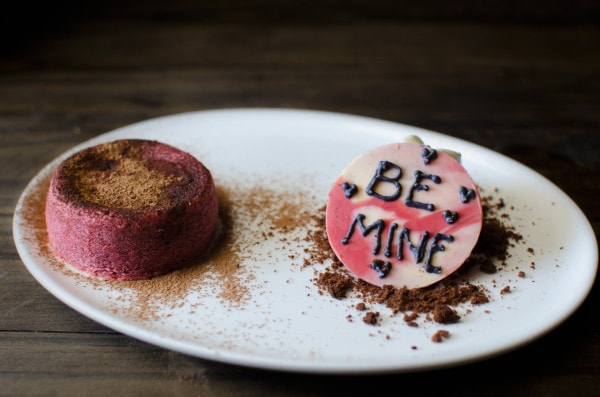 And this is the final result. I have to say I was giddy with excitement over this and it turned out to be oh so delicious and decadent! But my most favourite part of course is what you see in that GIF below. Taking it hot out of the oven, and then cutting into it and watching that ooey-gooey “bloody” center just ooze out and spread out over my plate. Oh so bloody satisfying! 😀

The raspberry and white chocolate ganache works perfectly in this recipe when it’s melted like this. It’s got that perfect texture and consistency for a very creepy “bloody” effect! The lava cake has a very healthy dose of raspberry flavour too, and boy that ganache in the middle is just so addictive.

Did you ever think a bleeding heart could taste this good? Unless of course, you’re the kind that Halloween’s all about. In that case, dig in. Don’t mind me standing here, smacking my lips, looking at that bloody mess.

So much bloooood. So much goooood. Mmmmmm…..

I will be sharing my recipe over at –