This shop has been compensated by Collective Bias, Inc. and its advertiser. All opinions are mine alone. #CoffeeCreamerCombos #CollectiveBias

Enjoy your cup of joe even more by making cold brew coffee at home! It’s super easy to do, need no special equipment, and you can store it in the fridge for longer too! All you need is just some patience, grasshopper – and you get a smooth, Cinnamon Flavored Cold Brew Coffee without any of the acidity and bitterness of hot brewed coffee! Make it even easier and more flavorful with this new bakery-style coffees from Dunkin Donuts® !

You can check out ANOTHER DUNKIN DONUT COFFEE CREATION by clicking here! Find out how I made a delicious Coffee Affogato Ice cream Sundae with Mocha Fudge sauce and Crunchy Coffee Streusel! It’s not often that you come across life-changing experiences at a cafe, and even less often does it revolve around coffee, but that’s pretty much what happened to me the first time I drank cold brew coffee.

Wherever I go now, if cold brew coffee is on the menu, then by god, that’s what I’ll have. A few months ago I posted a recipe for Cold Brew Mocha Kit Kat Slam where I went into some detail about cold brew coffee and pairing it with cacao beans, so I’ll spare you guys the details this time. 🙂 As long as you have a little bit of patience, there’s really no reason not to make your own cold brew coffee at home, because it’s such a ridiculously easy thing to do that doesn’t require special equipment.

Which is another reason why I was really pumped to make flavored cold brew coffee this time with the new line of bakery-style coffees from Dunkin Donuts® Bakery Series® like the Cinnamon Roll Coffee, Vanilla Cupcake Coffee and Caramel Coffee Cake Coffee! The idea of cinnamon flavored coffee really intrigued me. I usually grind my own coffee to make cold brew so that I can keep it coarse. But not everyone’s able to grind their own coffee, or even wants to. Dunkin Donuts® coffee that I use here is a pre-ground, medium-coarse coffee that’s actually perfect for drip coffee or your moka pot. However, with a couple of small adjustments, I made it work perfectly for cold brew coffee too! 🙂

Traditionally, cold brew is made with coarse ground coffee and then steeped in water for 12-24 hours. However, if you’re starting with pre-ground, medium-coarse coffee, then 8 hours of soaking is what works best. I have gone for as long as 12, but 8 hours hits the sweet spot for me. While I was at the store, I couldn’t resist getting both cinnamon roll flavored coffee AND caramel coffee cake flavored coffee too! Then I closed my eyes and picked one to try first, and it turned out to be the cinnamon flavored one! 🙂 To enhance the subtle flavor (and the beautiful aroma) of cinnamon rolls in the coffee, I made a delicious brown sugar syrup infused with cinnamon to sweeten the Cold brew coffee as well. As you know it is harder to dissolve sugar in cold brew coffee, so sugar syrup, or honey or liquid sweetener is the best option to sweeten the cold brew. The other advantage is that you don’t need to sweeten the cold brew much, because it doesn’t have the bitterness of hot brewed coffee!

I usually pair my coffee with half and half as creamer in my coffee, and this is especially true with flavored coffee. The creaminess of half and half enhances the flavor and texture of your coffee. Land O Lakes® Half and Half is perfectly creamy and contributes to a very smooth, rich, creamy mouthfeel that makes your coffee that much more enjoyable! It’s the perfect pairing. But with the plethora of flavored creamers that are now available, you can create endless combinations of flavored coffee drinks too. Because cold brewed coffee has more flavor (and much less acidity and bitterness) compared to hot brewed coffee, pairing it with this cinnamon infused sugar syrup and creamy half and half will give you a truly indulgent cup of coffee! And for something truly fancy, top it with a dollop of whipped cream and a sprinkling of cinnamon! 🙂

The flavors and aroma of cinnamon in this deliciously indulgent coffee drink are truly perfect for Fall. With those warming spices and a creamy and refreshing cup of coffee, you couldn’t have asked for a better start to your day!

Good quality coffee will have a big impact on the end result – this goes without saying.

For best results, use filtered water with no added chemicals or particulates. Tap water contains calcium and other particulate matter that’ll mess with the flavor and texture of your cold brew coffee. Using filtered or distilled water will obviously prevent that from happening.

Using a nut milk bag (see pictures) will make your life a lot easier, when your soaking your ground coffee. You can of course seep your coffee directly in water, but using a nut milk bag (or a big tea bag) means that you won’t be required to do too much filtering at the end of the process.

Make sure your coffee grounds are completely saturated with water. Cover the water soaked in coffee with plastic wrap or a cloth and store it somewhere cool (like the fridge). I prefer using a glass container, but you can use a clean plastic container too. I just get paranoid thinking that the plastic might artificially flavor my coffee when it’s being infused like that for a number of hours. So far I have not been able to prove this either way, so it still remains nothing more than a paranoid thought in my head. 🙂

When you’re filtering the coffee at the end, don’t squeeze the coffee grounds too much. Just let it drip naturally and when all the liquid has drained naturally, gently press on it.

You can store the cold brewed coffee in an airtight container in the fridge for up to a week. Preferably in a glass container. 🙂 So why cold brew coffee?

It’s so much easier than you’d think!

The resulting cold brew isn’t bitter like its hot brewed counterpart, with a smoother, almost sweeter flavor and texture. This is because cold water doesn’t extract the bitter compounds of coffee as readily as hot water does.

Because it has less bitterness, it requires less sweetener to sweeten your cup of coffee too!

Cold brew coffee is also quite strong. So you have to dilute it with water or milk. My preference is half and half as I said before, because the fats and proteins in milk result in a very creamy, desirable mouthfeel in your cup of coffee.

And for something different – add a few ice cubes and half and half in with your cold brewed coffee and blend it for a DELICIOUS frappuccino! Super creamy, frothy iced coffee, right at home! 🙂

What better way to start the day, right? Cafe-style Dunkin Donuts® Coffee right at home! And maybe even with a homemade glazed doughnut on the side? 🙂 You can Check out the recipe for Coffee Affogato Ice cream Sundae with Mocha Fudge sauce and Crunchy Coffee Streusel by clicking on the link! 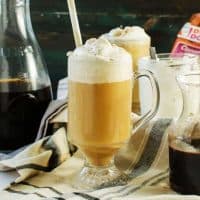 You can find the new Dunkin Donuts® Bakery Series® coffee and Land O Lakes® Half and Half at your local Kroger store or Kroger Banner stores (like Gerbes – where I shop). The coffee can be found in the coffee and tea isle and the creamers are in the refrigerated dairy section. There’s a lot of creamer flavors that you can choose from too! If you liked this cinnamon flavored cold brew coffee recipe, don’t forget to subscribe for new (and free) recipes by entering your email address on the side bar (and get all these recipes delivered straight to your inbox), so you don’t miss out on a thing. You can find me on FACEBOOK, TWITTER,INSTAGRAM,  PINTEREST, YOU TUBE and GOOGLE-PLUS too.