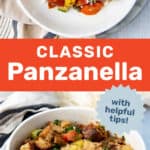 Panzanella is a classic salad originating from the Tuscany region of Italy, and popular throughout the country. It’s super simple to make and easy to adapt to what you have at home too. Bread, onion and tomato are all you need, but feel free to make it your own!

This chopped bread and tomato salad is also an incredibly versatile, simple and tasty salad to use up stale bread.

I was introduced to Panzanella salad when I used to live in Australia, more than a decade ago. I’ve been making it regularly since then, all year round. It may typically be a warm weather salad, but so long as I have dry or stale bread and tomatoes in the house, classic panzanella salad is a no-brainer. It’s such a great way for us to use up stale sourdough bread, and the ends of bread loaves.

Panzanella is an Italian chopped salad, which consists of chopped stale bread, chopped tomatoes, onions and salad dressing. I also always add basil and cucumber to the salad, and sometimes I like to add parsley, peppers, hard-boiled eggs or even bacon too!

This obviously diverges from the simple, classic salad, but as you can see it’s very adaptable and these additions ramp up the flavor several fold! The stale bread absorbs all the flavor from the ingredients. This quintessential summer salad is also known as Panmolle.

Stale bread is what is traditionally used, but I prefer to use toasted bread instead. Fresh (or stale) bread is cut into cubes and toasted in the oven with oil and garlic. I find that this gives me the BEST results for a delicious panzanella. It’s the same technique that I use for my roasted panzanella salad as well.

I also don’t like to use regular supermarket sandwich bread. A good sourdough loaf, baguettes, or any crusty loaf of bread will work perfectly.

Summer tomatoes are the best for this panzanella salad for obvious reasons. They just taste that much better. But you can use tomatoes in the winter too even if they don’t taste as sweet.

Here, I use heirloom tomatoes. But I also love using cherry tomatoes! Roma tomatoes also work very well. Basically any tomato that tastes good to you will work in this panzanella recipe.

Why do you salt the tomatoes?

The trick to getting tomatoes to taste even better is to salt them. This was something I picked up years ago, although for different reasons. Salt draws out moisture, making the tomato taste just a little sweeter, and also prevents sandwiches from getting soggy by the tomatoes.

I like to use red onions, or vidalia onions or shallots. All these onions can be eaten raw, so it’s important to use an onion type that can be enjoyed raw. My personal preference is shallots, because they are sweeter and they have a more subtle sharpness in flavor. Honestly though, I use red onions more often because they are more widely available.

This is usually optional, but I LOVE cucumbers in this salad. It’s the main crunchy factor in this salad too.

Basil is my herb of choice for this salad. But you can also use a combination of basil and parsley.

A simple garlic lemon dressing will work wonders in a classic panzanella salad. But I do often like it with a balsamic dressing instead though.

How to make the salad

There are a few additional steps that I take to make this panzanella salad to my liking. You are welcome to skip these, but I do highly recommend following them if you can.

First, cut up the stale bread into 1 inch sized cubes. This doesn’t have to be precise, just roughly the same size. Don’t make them too small because you want the bread to absorb the moisture, but not turn into mush either.

Toast the bread cubes with butter and garlic. You can do this in the oven or in a large pan. I prefer the oven, because it dries out the bread more. The goal is to add flavor to the bread and remove moisture. The bread doesn’t have to be toasted all over – only slightly toasted.

Place the toasted bread cubes in a large bowl.

Cut up the tomatoes into similar-sized cubes. If you’re using cherry tomatoes, cut them in half. Place them in a bowl, and sprinkle some salt over the tomatoes. Mix and let it sit for about 10-15 minutes. The salt will draw out some of the water in the tomatoes and make them a little sweeter as well. Do NOT throw out the water that is drawn out.

While the tomatoes are sitting in the bowl, get the dressing for the panzanella salad ready. I love balsamic vinegar, so my dressing of choice is a mustard and balsamic dressing. A simple lemon vinaigrette also works beautifully! Whisk all the ingredients for the dressing in a bowl and set aside.

Slice the onions into thin slices. If the onion is big, cut the slices in half to make them shorter. Chop the cucumber into 1/2 inch cubes as well. I prefer the cucumbers to be a little smaller, but you can also cut them into 1 inch cubes if you like, or even slice them. Totally up to you.

Pluck the basil leaves, and roughly slice or chop them.

To the large bowl containing the toasted bread cubes, add the chopped tomatoes, onions, cucumber and basil. Toss to combine.

Now, you have to allow the panzanella salad to sit for at least 20 minutes before eating.

When you’re ready to eat the salad, you can serve and eat it just as is! Or you can dial up the flavor even more,

Variations to the Panzanella salad

This is the recipe for a classic panzanella salad. But feel free to change up the ingredients to make this your own!

But you can also make other simple variations.

This panzanella salad is a classic for a reason! It’s a simple and comforting salad, brimming with flavor. Plus, you can adapt it to your tastes just as easily with slight ingredient variations. 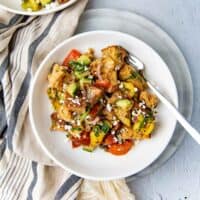 Author: Dini K.
Yield: Serves four generously
Cuisine: European, Italian
Learn how to make a classic panzanella salad. An easy and warming salad, brimming with flavor! A few simple tips and tricks will make this simple salad so much more flavorful. A great way to use up stale bread as well.EASY – This recipe is very easy and versatile. It's a quick recipe too, and with a lot of flavor. Perfect for beginners. US based cup, teaspoon, tablespoon measurements. Common Measurement Conversions. Weight measurements are recommended for accurate results.
Prep: 40 minutes
Resting time: 30 minutes
Cook: 20 minutes
Total Time: 1 hour 30 minutes
Difficulty: Easy
Servings: 4 servings
Print Rate