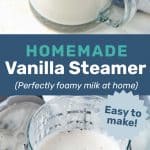 Homemade vanilla steamer is an incredibly comforting drink. Warm, fluffy milk with a touch of cinnamon and maple syrup – such a simple, delicious, and winter-worthy warming drink for both kids and adults!

Learn how to froth milk at home without any fancy gadgets, to make this delicious vanilla steamer!

Back when I used to work as a trained barista during my university days, the least complicated drink I had to make was a “fluffy” (also called a babyccino).

It was a drink made for kids who were too young for coffee, but still wanted the “coffee experience” with their family. It was simply steamed milk, with a sprinkling of cinnamon or hot chocolate powder on top, and topped with a marshmallow that sweetened the drink as it melted.

You only need four ingredients.

How to make the froth in the homemade vanilla steamer

Obviously not everyone’s going to have a coffee machine with a milk steam wand. BUT, there are a few ways to create that lovely froth without a pricey coffee machine.

You can make this steamer using any of these methods.

How to make a vanilla steamer

Place the milk, maple syrup, and a cinnamon stick in a saucepan. Alternatively, you can heat the mixture in the microwave too (in a microwave-safe container).

Heat the milk mixture slowly on medium low heat (not high heat). This lets the cinnamon infuse into the milk well. If you use ground cinnamon, the flavor will infuse faster.

When the milk is steaming (no more than 180 F), it’s ready. Now your vanilla steamer is ready to be frothed.

Frothing with a jar

Remove the cinnamon stick and add some vanilla to the milk. Pour the milk into a jar with a tight-fitting lid (like a mason jar). Shake vigorously to create some foam.

With a jar, the foam bubbles will be large and also disappear quickly. So, as soon as you have enough froth, quickly pour it into serving glasses or mugs. Serve the vanilla steamer with an extra sprinkling of cinnamon.

Frothing with a French press

As far as cheaper options go, this is my favorite way to create foam in my milk. I relied heavily on my French press to create steamed frothy milk and latte art when I didn’t own an espresso machine. So this is perfect to make this homemade vanilla steamer.

Place the hot milk in the French press after you remove the cinnamon stick and add the vanilla.

Just check out the image below and compare it to the one above. All that extra white on top is 100% foam.

Once you have formed the foam, swirl the French press to slightly mix the milk and the froth layer, and pour it into the serving glasses. Be careful not to dispense all the froth into the first glass.

You can use both of these gadgets as well to create frothy milk. The method is pretty self explanatory for either of these tools, as they come with an instruction manual. So I won’t go into detail here.

You could also make a delicious vegan vanilla steamer at home, if you like.

Homemade vegan vanilla steamer – Substitute the milk with a barista quality plant based milk. I love using barista oat milk. In fact, I make this vanilla steamer much more often with oat milk than with regular milk.

Maple syrup substitution – You could actually leave out the sweetener entirely, if preferred. I like my steamer to be just a tad sweet so I don’t usually add much maple syrup. But you can also add honey, sugar, or even sugar substitutes to suit your preference.

Cinnamon stick – You can use ground cinnamon instead as well. You can also use Ceylon cinnamon for a more floral, earthy flavor.

Other additions to your vanilla steamer

The great thing about a homemade vanilla steamer is that you can make it your own.

Boozy vanilla steamers – For the adults, a dash of bourbon, rum, brandy, or whiskey would be a fun addition as well!

I’ve been on a vanilla steamer kick lately, and it’s been such a comforting drink during these cold winter days. Especially, without the added richness of chocolate.

And since there are several options to froth your milk without any expensive tools, it’s a “gourmet” drink that you can easily make at home, any time you like. And it’s very kid-friendly too.

It’s perfectly sweet (i.e. not too sweet at all), and refreshingly warming and soothing. This homemade version tastes just as good (or better) as a fluffy, foamy vanilla steamer you’d get in cafes! 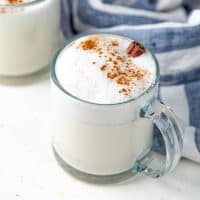 Full fat milk froths much better compared to low fat. You could also use 2% milk if that’s what you have. But 1% or 0% fat milk will not give you the same results or flavors in this recipe.  For a vegan option, my go to is barista oat milk. You can also use barista quality almond milk.

Note on using a French press

I use a 1 L capacity French press to make 2 servings. If you only have a small French press, and you don’t want to froth twice, you can froth only half the milk as stated in the recipe.  Then divide the remaining milk between the two mugs, and top the two mugs equally with the milk and froth from the French press.  You can also use a mason jar with a whisk ball and a lid. Vigorously shake the milk until you form enough froth, then quickly pour it into two mugs and serve.

Course:Beverages, Breakfast, Tea / coffee break
Cuisine:American, Australasian, North American
Keyword:Milk Recipes, Vanilla, Vanilla steamers, Vegan, Vegan friendly
Did you make this?Tag me on Instagram!I love seeing what you’ve made! Tag me on Instagram at @TheFlavorBender or leave me a comment & rating below.