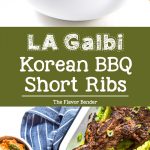 There’s a reason why LA Galbi (Korean BBQ Short Ribs) is so popular! Marinated with a riot of sweet and savory flavors, the meat is tender and succulent with some caramelization. Perfect for breakfast, lunch or dinner, and grilling out with friends and family or cooking indoors on a griddle or stove top. 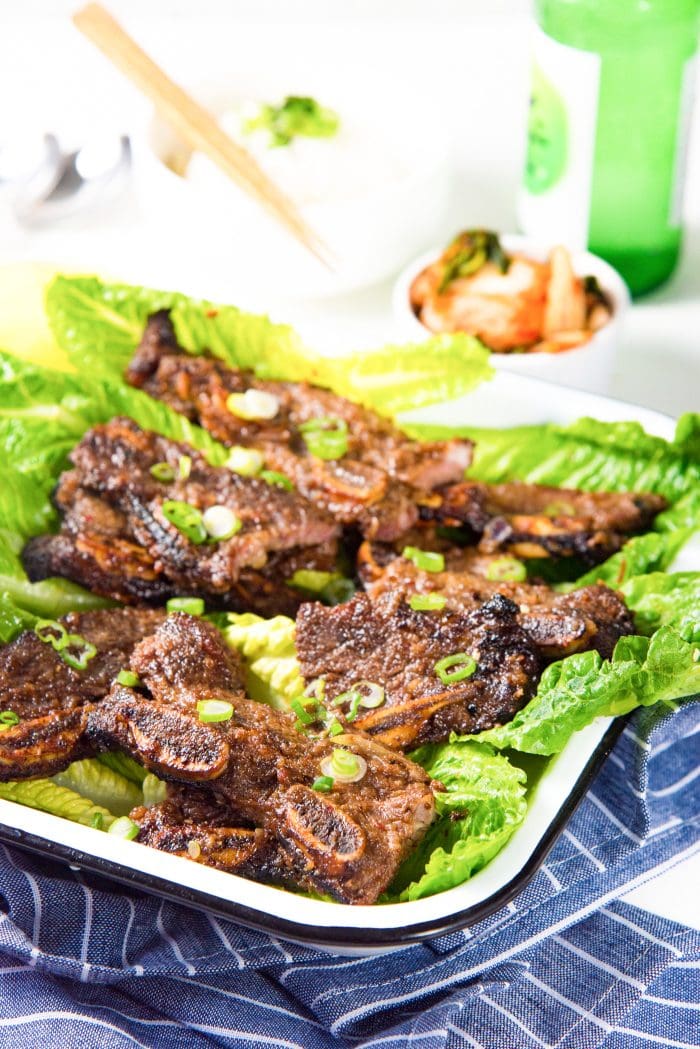 The last time I enjoyed the experience of a full on Korean BBQ was years ago, when I was visiting Brisbane, Australia. I didn’t eat beef much at the time, but I loved the grilled chicken BBQ that we made. I’ve been eating more beef since then, and loving all of my favorite Korean dishes with beef even more now.

I introduced Korean cuisine to K with some Japache (noodles). Next, he tried Bulgogi and Galbi. It wasn’t until he tasted LA Galbi did he truly get hooked on Korean cuisine. Now it’s a regular in our house and if you guys know how flavorful this dish is, you wouldn’t be surprised! 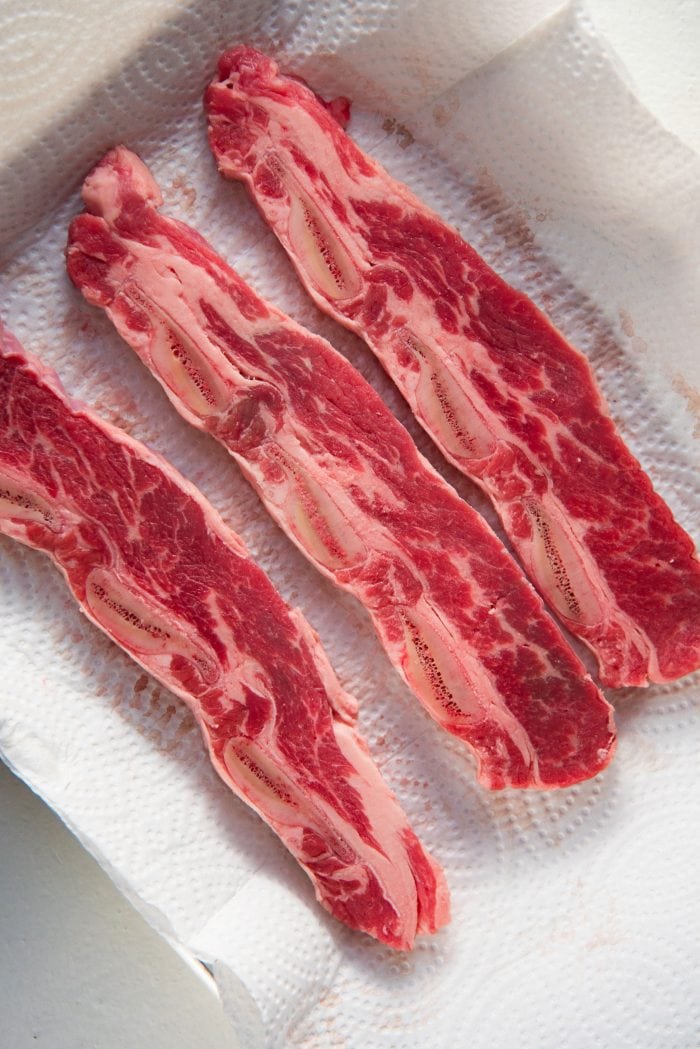 The popular belief is that LA Galbi derived its name after the “LAteral” cut ribs. Another theory is that it’s named after Los Angeles, where it originated thanks to immigrants who used this particular cut of beef to introduce galbi to US patrons. Either way, I am just thankful that it exists! 🙂 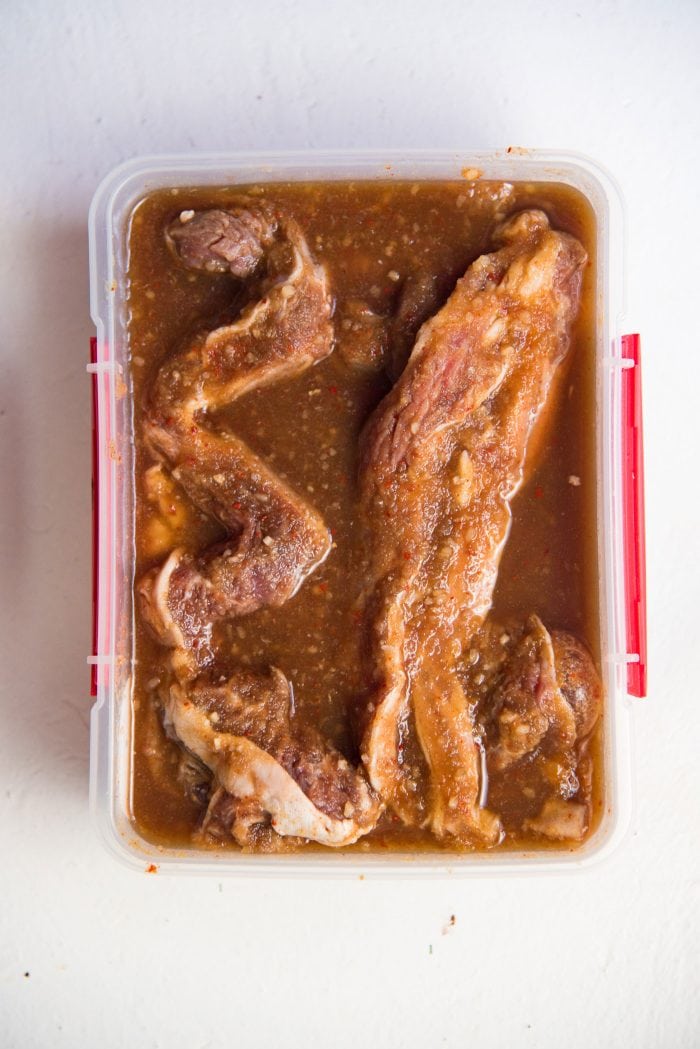 These Korean BBQ short ribs are incredibly flavorful with both sweet and savory notes. The not so secret ingredient that makes this Korean BBQ dish stand out is the pureed Asian pears! It’s a classic addition in Korean cooking as you can find this ingredient in Bulgogi as well. The pear puree is thought to tenderize the meat, as well as add a fruity sweetness to the meat.

If you haven’t done so before, make sure to order LA galbi or any kind of Korean BBQ beef dish on the menu, next time you visit a Korean restaurant. The experience of grilling the meat over a grill yourself, and pairing it with all the flavorful side dishes (Banchan), and some Soju, together with friends and family is amazing! 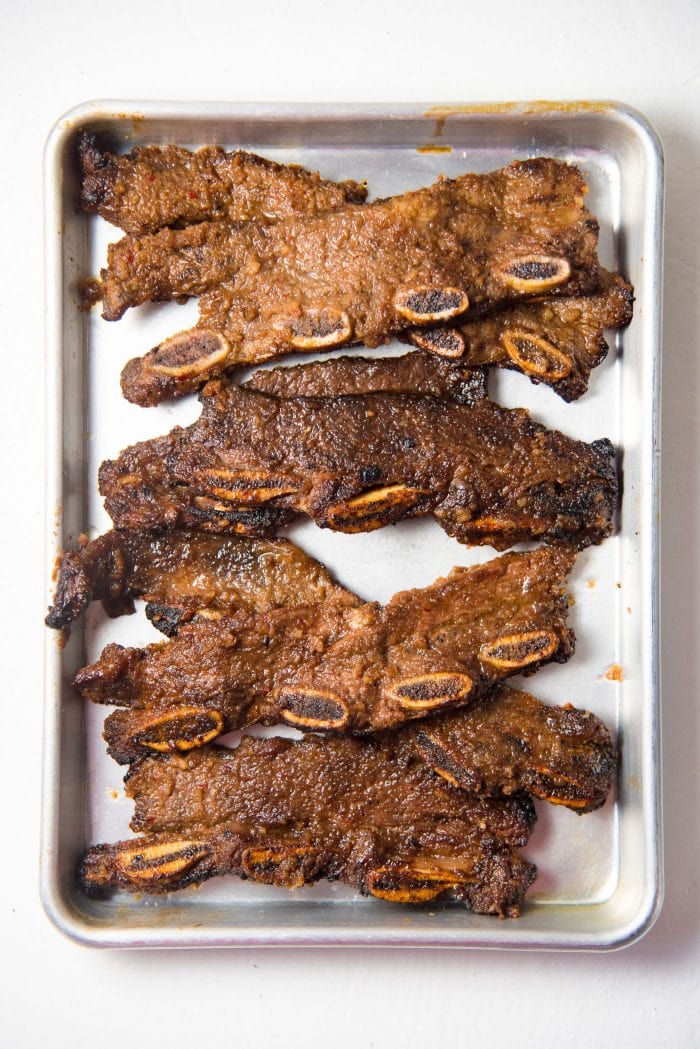 Can I make this Korean BBQ short ribs recipe (Korean galbi recipe) with pork or chicken?

The word galbi or kalbi means ribs. If you make this with pork ribs, it’ll be called Dwaeji Galbi.

This doesn’t mean that you cannot make this recipe with other cuts of meat. It just won’t be called galbi then. The marinade here is so delicious that I’ve tried it with boneless chicken thighs and it was fantastic!

I don’t have a grill at home. Is there another way I can prepare these Korean short ribs indoors?

One of my favorite ways to cook this LA galbi is under the broiler. This way I can cook more at the same time as well. 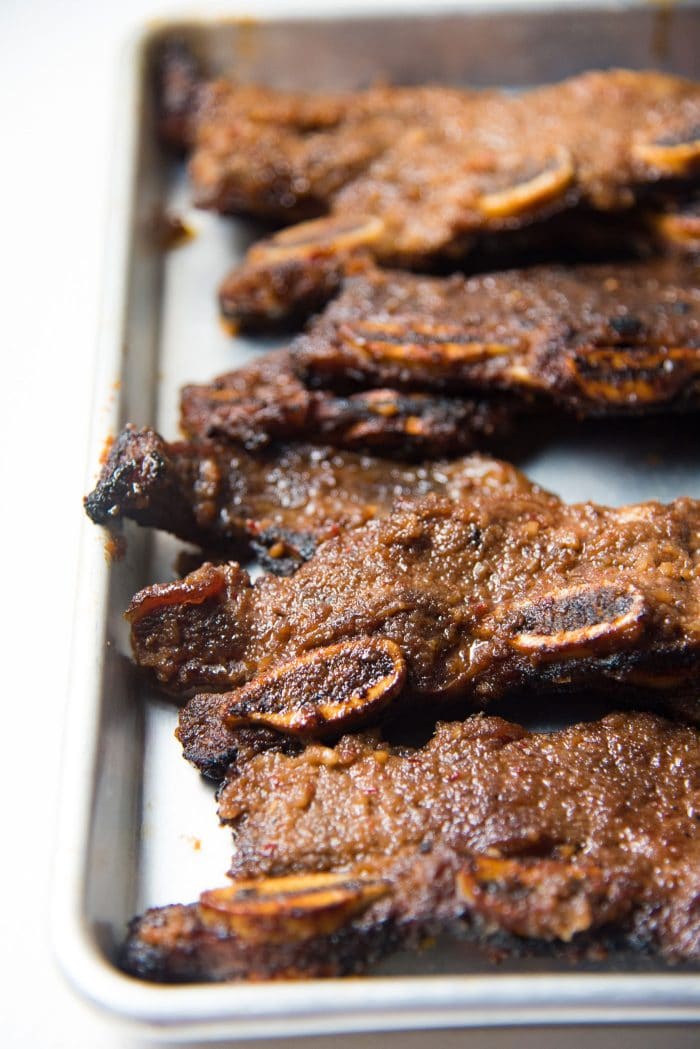 If you can find hybrid style short ribs, then you are good to go. To grill the hybrid style (or small English cut ribs), you will need to “butterfly” cut the top meat of the short ribs (cut the meat away from the top of the bone) so that it’s a thin strip of meat with the bone at the end.

It’s a little more work, but once you have butterflied the short ribs, you can proceed with the LA galbi recipe.

Is there a substitute for Asian pears to make Galbi?

While Asian pears are traditionally used for this recipe, you can substitute with Bosc pears if that’s what you have access to. You could also use a sweet apple for this recipe, like Fuji or Gala apples.

The marinade for these Korean short ribs includes sugar and mirin (or a sweet rice wine), in addition to the pureed pears. These sweet flavors and ingredients help tenderize the meat AND give the BBQ short ribs a caramelized sheen after they’ve been cooked. I like to add some Soju (a Korean alcoholic beverage) to the marinade as well, but you can substitute that with water OR sprite.

Other flavors that go into this marinade are soy sauce, onions, garlic, ginger and black pepper. These flavors are essential to make classic LA galbi. However, I also like to add some gochugaru (a type of coarsely ground red pepper), which isn’t traditional, but we like the added heat. You can simply use cayenne pepper in place of the gochugaru, if you don’t have it. 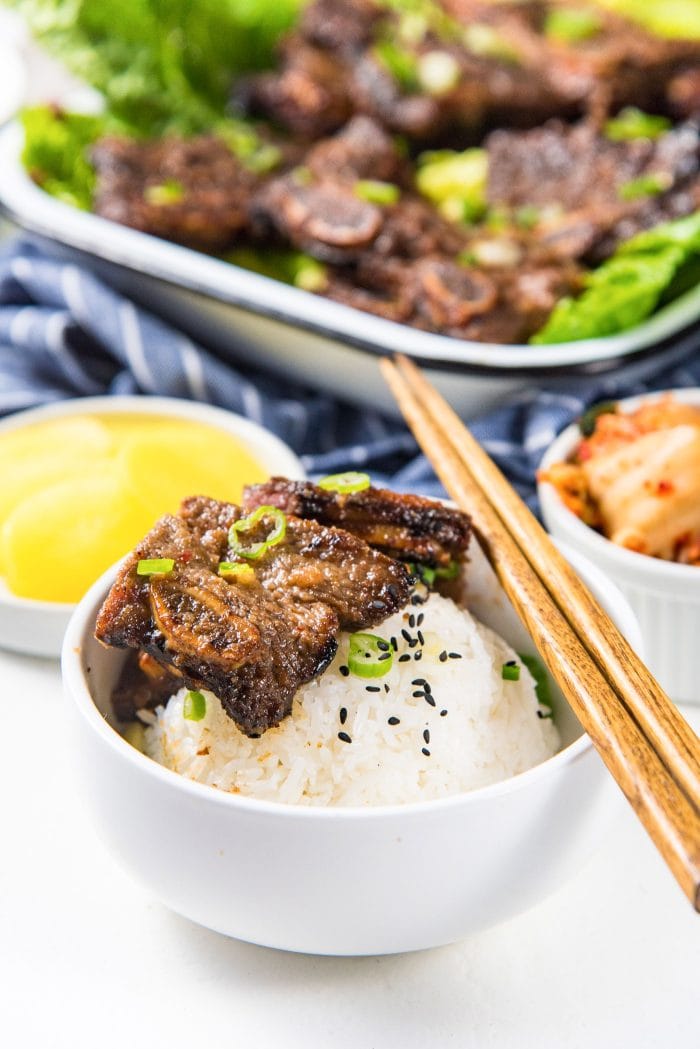 These Korean BBQ short ribs (LA Galbi) pack an incredible amount of flavor. They are,

K and I love to eat LA galbi with rice and kimchi, and other side dishes like salad or bean sprouts or vegetables, when we eat this for dinner.  I always make enough for leftovers, because then we can eat the leftovers in the morning as breakfast with a little rice and a sunny side up egg! Plus, these Korean BBQ short ribs are perfect in lettuce wraps! You will need to pull out the bone pieces before making the wraps, but they would be perfect as a light lunch with lettuce, carrots, and bean sprouts. 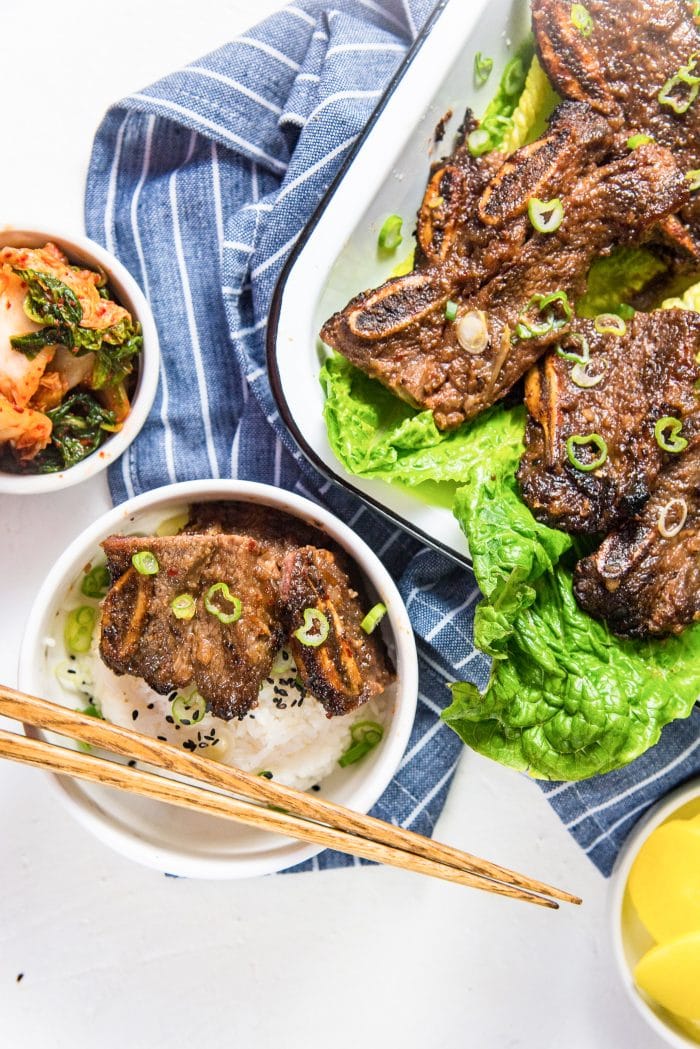 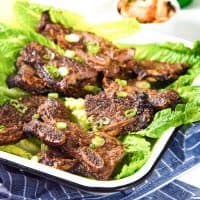 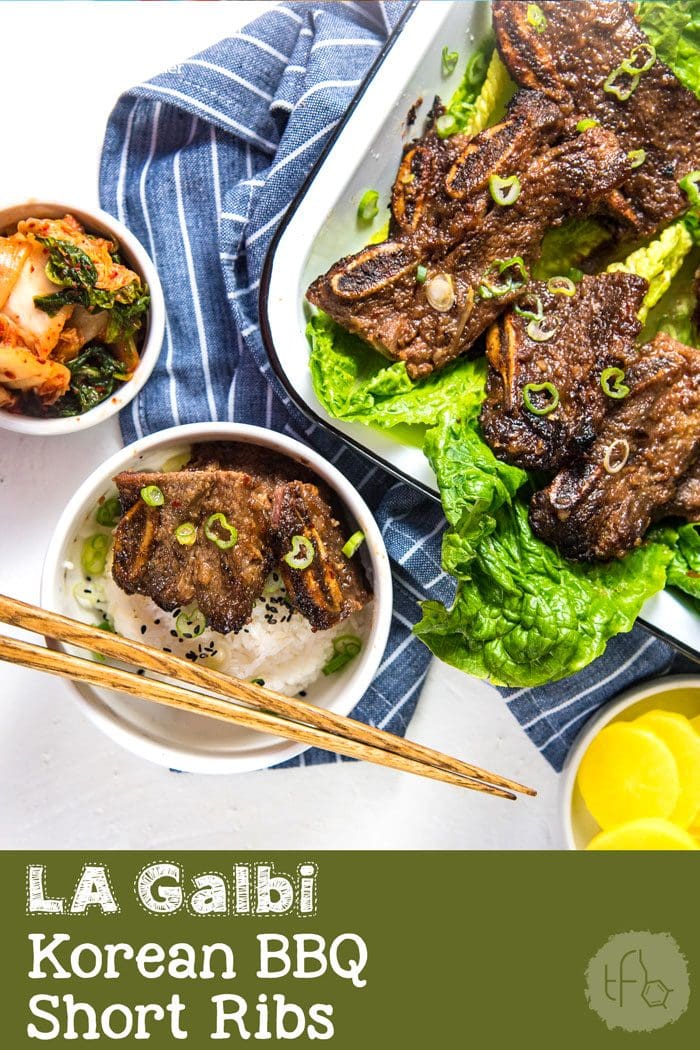 If you liked this LA galbi recipe (Korean BBQ short ribs), don’t forget to subscribe for new (and free) recipes by entering your email address on the side bar (and get all these recipes delivered straight to your inbox), so you don’t miss out on a thing. You can find me on FACEBOOK, TWITTER, INSTAGRAM,  PINTEREST, YOU TUBE and GOOGLE-PLUS too.