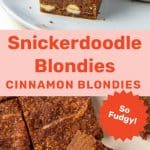 Snickerdoodle blondies are the delicious love child between snickerdoodle cookies and my favorite brown butter blondies! It’s the best of both worlds – very fudgy with deep cinnamon and butterscotch flavors that put these snickerdoodles over the top.

Packed with cinnamon and butterscotch, these snickerdoodle blondies are addictively decadent.

My brown butter blondies are always a favorite around these parts. Thick, fudgy, chewy, and decadent, those babies are hard to beat. But due to my slight obsession with cinnamon and snickerdoodles, these snickerdoodle blondies come pretty close to first place.

So yes, these are glorious on their own merit. And best of all, these are very simple to make.

What you need to make snickerdoodle blondies

Can I make these blondies without brown butter?

Browning butter adds a ton of flavor to the snickerdoodle blondies. But if you are pressed for time, you can skip this step.

However, if you do have the time, it’s absolutely worth your while to use brown butter in this recipe.

How to make these blondies

Just like my brown butter blondies, these snickerdoodle blondies are an easy recipe as well. The only extra step is browning the butter.

You can check out my detailed guide here on how to make brown butter. Once the brown butter is made, and cooled down to almost room temperature, you’re ready to make the batter.

Add the eggs and vanilla, and mix them in well. After adding the eggs, continue to mix the batter until it becomes thicker and lighter in color.

This usually helps with giving the blondies a shiny, crackly crust. However, these snickerdoodle blondies will be covered in cinnamon sugar so you’re not really going to see that crackly crust. But this step is still crucial to get that fudgy texture.

Whisk the flour, cinnamon, and cream of tartar together, and fold them into the blondie batter. Add the white chocolate chips halfway through, and mix just until the flour is incorporated.

Spread the batter in a prepared 8 or 9 inch square pan, and evenly sprinkle the cinnamon sugar on top, in a thin layer. Bake in a preheated oven for about 20 – 30 minutes.

The snickerdoodle blondies will puff up as they bake, and then collapse a little as they cool down. This is A-OK, this is GOOD. This is what creates the fudgy center.

Let the snickerdoodle blondies cool down before cutting. The blondie texture is perfect after they have been allowed to rest a little. Plus you get nice, clean cuts too.

To cool down the brown butter faster, add a couple of ice cubes instead of water.

Make sure to mix the batter well after adding the eggs. The batter needs to become thicker and lighter in color.

The air incorporated will make the blondies rise as they bake, which helps them to cook through. But the blondies will collapse as they cool, which gives that fabulous fudgy texture to them.

Use good quality cinnamon. After all, this is the key flavor in these snickerdoodle blondies. You can use a mixture of Korintje cinnamon (cassia cinnamon) and Ceylon cinnamon (true cinnamon) as well.

Cream of tartar gives these blondies the tanginess that is classic in snickerdoodles. But you can leave it out if you don’t have it. The result will be delicious cinnamon blondies instead.

These snickerdoodle blondies will keep in an air-tight container (or even a tightly sealed ziploc bag) and at room temperature for about 4 days.

They can also be stored in the fridge for about 7 – 8 days, OR you can wrap them in plastic wrap and then in foil and freeze them for up to 3 months. Just make sure to thaw them out before eating again.

These snickerdoodle blondies are so easy to make.

These are also great for gift giving during the holidays!

Try warming them up slightly and eating with a scoop of ice cream. Yum! 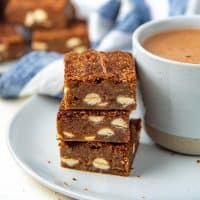 Author: Dini K.
Yield: 16 pieces (about 2 x 2 inches each)
Cuisine: American, North American
These snickerdoodle blondies are super chewy and fudgy, with deep cinnamon and butterscotch flavors. And they are so easy to make. You won't stop at one! These just might be even better than snickerdoodle cookies!EASY – This recipe is very easy. These are also great to make with kids. If you like snickerdoodles, you will LOVE these blondies. US based cup, teaspoon, tablespoon measurements. Common Measurement Conversions. Weight measurements are recommended for accurate results. Please note that the bake times may vary slightly due to variations in how each oven works.
Prep: 30 minutes
Cooling time: 2 hours
Cook: 30 minutes
Total Time: 3 hours
Difficulty: Easy
Servings: 16 pieces
Print Rate

Check out my classic brown butter blondies recipe and FAQs about the recipe here. See here for my extra fudgy chocolate brownies recipe.