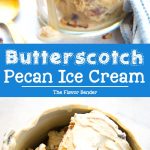 What makes this the BEST Butterscotch Pecan Ice Cream you’ll ever have? Brown butter, ice cream base infused with pecan flavor throughout, and crunchy caramelized toasted butter pecans in every scoop of ice cream!

Rich, creamy and irresistible, this butterscotch butter pecan ice cream is another summer favorite of mine. 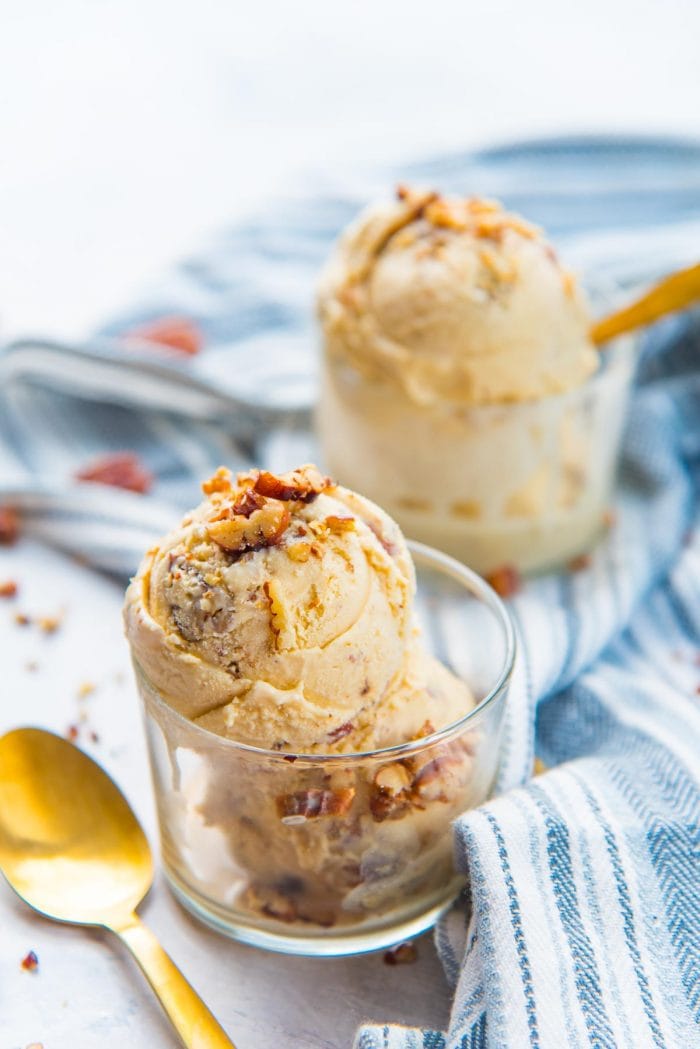 I’ve been on an ice cream binge lately, as evidenced by this vanilla, chocolate, mint chocolate chip and cereal milk ice creams. Here’s the last one for a while, and I think I may have saved the best for last. This Brown Butter Butterscotch Pecan Ice Cream is in a league of its own.

Crunchy caramelized toasted pecans in every scoop of butterscotch ice cream, with a hint of brown butter… we love it so much that I’ve made it 3 times in the past couple of weeks. You know, for recipe testing… 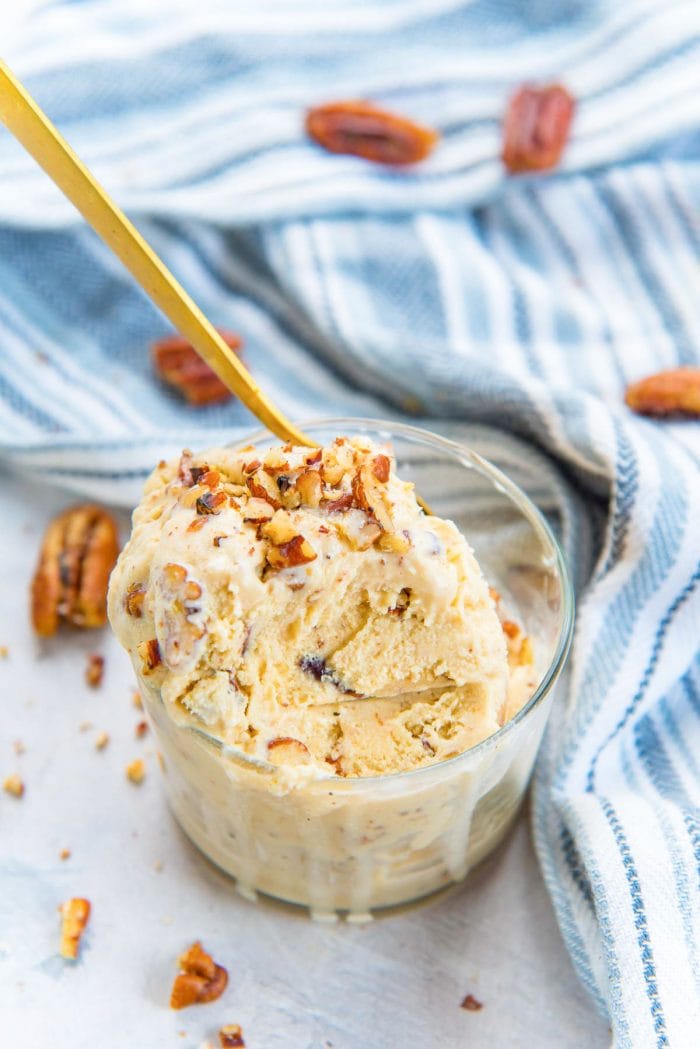 The first time, I just made classic brown butter butterscotch ice cream. It was fantastic, but K suggested adding some nuts to the ice cream. So after choosing between hazelnuts and pecans, I went with pecans.

The second time was even better, but I realized I could make it even more delicious if I,

BUT, before I tell you more about this butter pecan ice cream… I’ve got an ANNOUNCEMENT to make.

Let me introduce you to our new family member, our puppy Zuko! 🙂 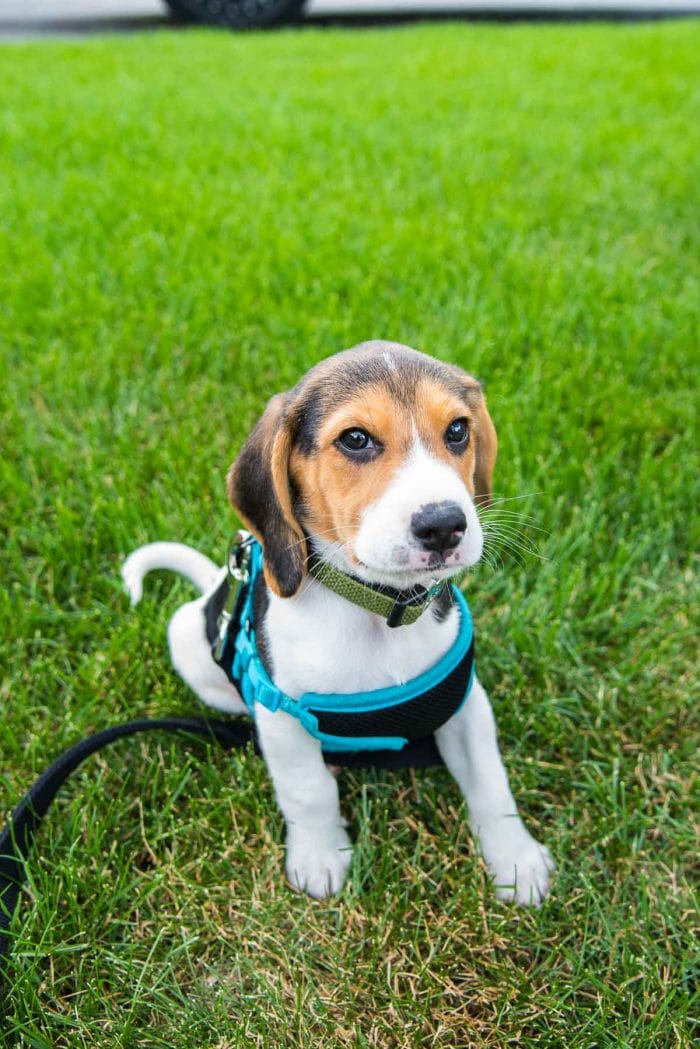 Zuko’s a 9 week old beagle puppy, and we adopted this guy almost 2 weeks ago. He’s a (wrecking) ball of energy, with the puppiest of eyes that let him get away with far too much.

So, you can be sure I’ll be sharing more pictures of Zuko on The Flavor Bender as he grows up! 🙂

It’s been an exhausting (and exasperating) couple of weeks trying to house train him. And he loves to chew everything and anything in sight. We still wouldn’t have it any other way though! 🙂

If you’d like to see and read more about Zuko, please stay tuned. I’ll be sharing more pictures of him here on the blog, and on my Instagram account too. 🙂 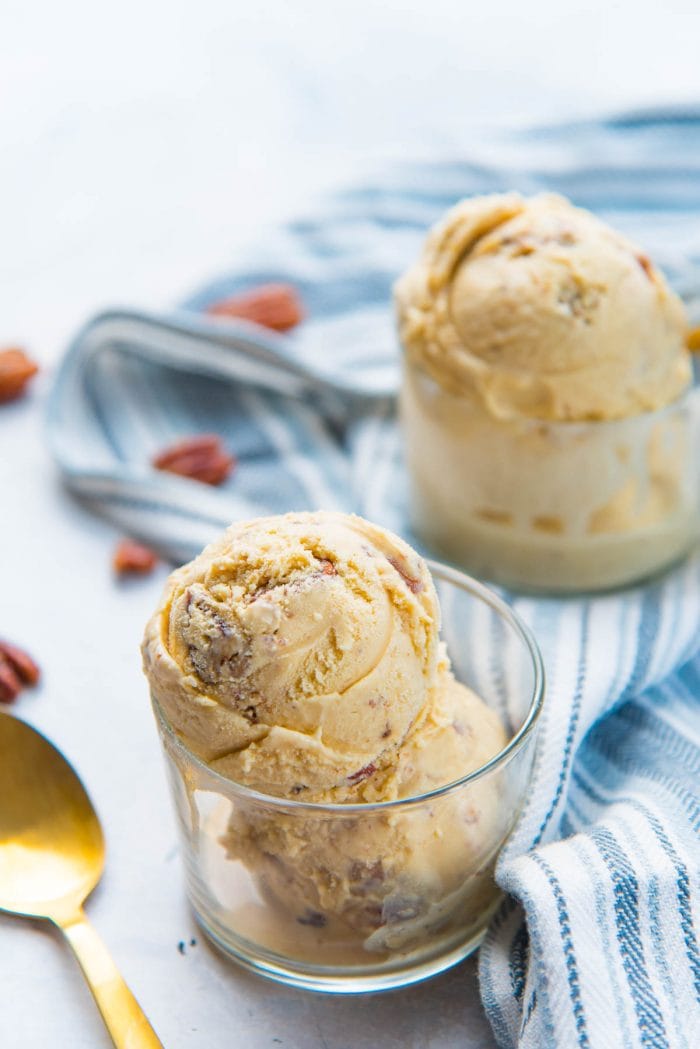 How to make brown butter

Brown butter is one of my favorite things in the world. It just makes everything better.

Check out some of my recipes here to see what I’m talking about.

The best chocolate chip cookies made with brown butter

Making brown butter is easy too. First cut up the unsalted butter into tablespoon-sized pieces so that it melts and heats evenly.

The stages of browning butter 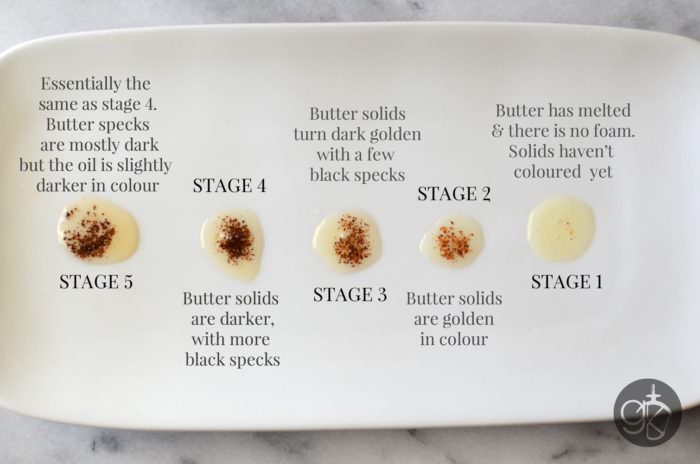 Then heat the butter in a non-stick saucepan to melt it. Once the butter melts, it’ll start to simmer, where the water in the butter starts evaporating. Once the water is evaporated, the leftover butter oil will foam as it continues to cook, and you will see milk solids settling on the bottom. Continue to cook (while stirring occasionally), and the milk solids will darken in color, and you will start to smell the most amazing toasty deliciousness.

When the milks solids on the bottom of the pan turn dark golden in color, the brown butter is ready (Stage 3). Immediately transfer the butter into a separate bowl, because the heat from the saucepan will keep cooking the butter. 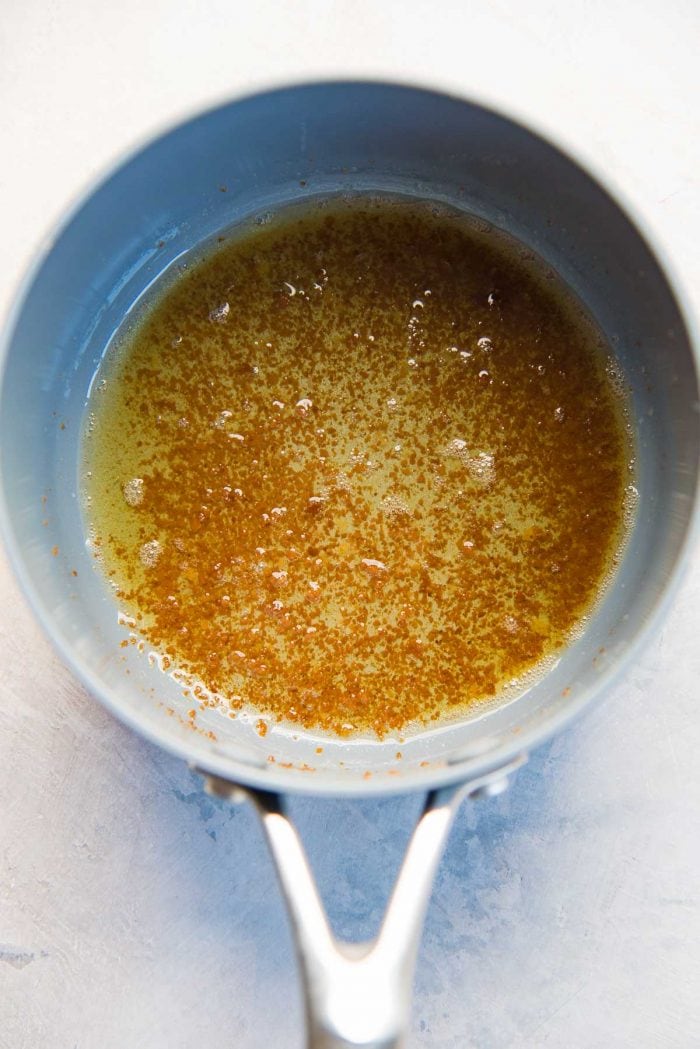 Melted butter can be used for other things too…

Do NOT throw away the melted butter. I use it to butter toast, make omelettes, grill vegetables for dinner or lunch, and even add it to my oatmeal for breakfast. We will also be using it to make toasted butter pecans for this butterscotch pecan ice cream as mentioned below. So nothing goes to waste.

These caramelized milk solids are packed with flavor, so you don’t want to lost any of it.

If you do make brown butter, use about 2 tbsp of the leftover butter fat to toast pecans on a pan. Once the pecans are toasted, I remove a quarter of the pecans for the ice cream base, then add 2 tbsp of brown sugar to the remaining pecans in the pan. Toss to melt the sugar and coast the pecans in it. The result is crunchy caramelized toasted butter pecans! 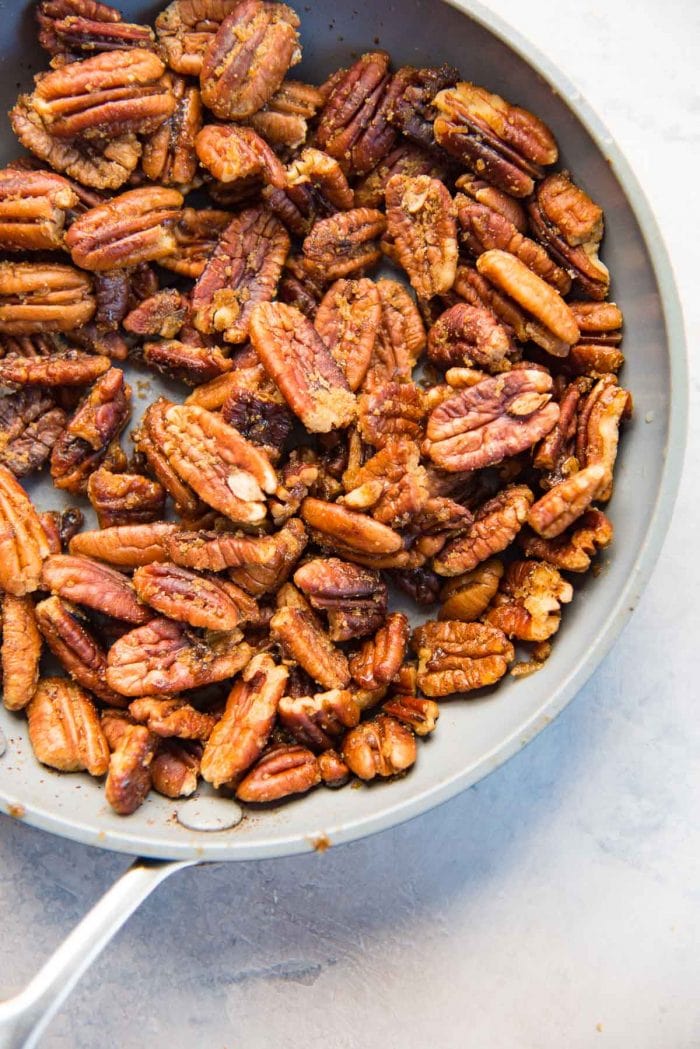 Place the brown butter milk solids in a pan that’s nice and warm, but NOT hot. This helps emulsify the butter with the sugar and egg yolks smoothly.

Then add the brown sugar, molasses (or dark corn syrup), egg yolks, vanilla and salt, and whisk to create a thick, smooth paste. If you don’t have molasses or dark corn syrup, then simply increase the amount of brown sugar by 3 tbsp. The reason I add molasses is because I use less eggs in this recipe, and want the butterscotch pecan ice cream to be smooth when it freezes. The molasses act as a stabilizer to keep the custard smooth.

Next, add the milk and cream slowly and whisk well to make sure everything is well combined. Then finally, add the 1/4 amount of toasted pecans that you set aside earlier.

Then just like all the other homemade ice cream recipes on my blog, you heat the milk mixture until it’s steaming and registers at 165-170°F. But unlike my other ice cream recipes, it’s important to let the pecan flavor thoroughly infuse the milk, so I let the ice cream base sit in the fridge overnight.

Next morning, I scoop up the pecans from the milk. Do NOT strain it, because then you risk losing the delicious toasty brown butter milk solids.

The let the butter pecan ice cream set in the freezer.

Browning butter and infusing pecan flavor are optional steps for this butter pecan ice cream, but they really do set this recipe apart and enhance the flavor of the ice cream. 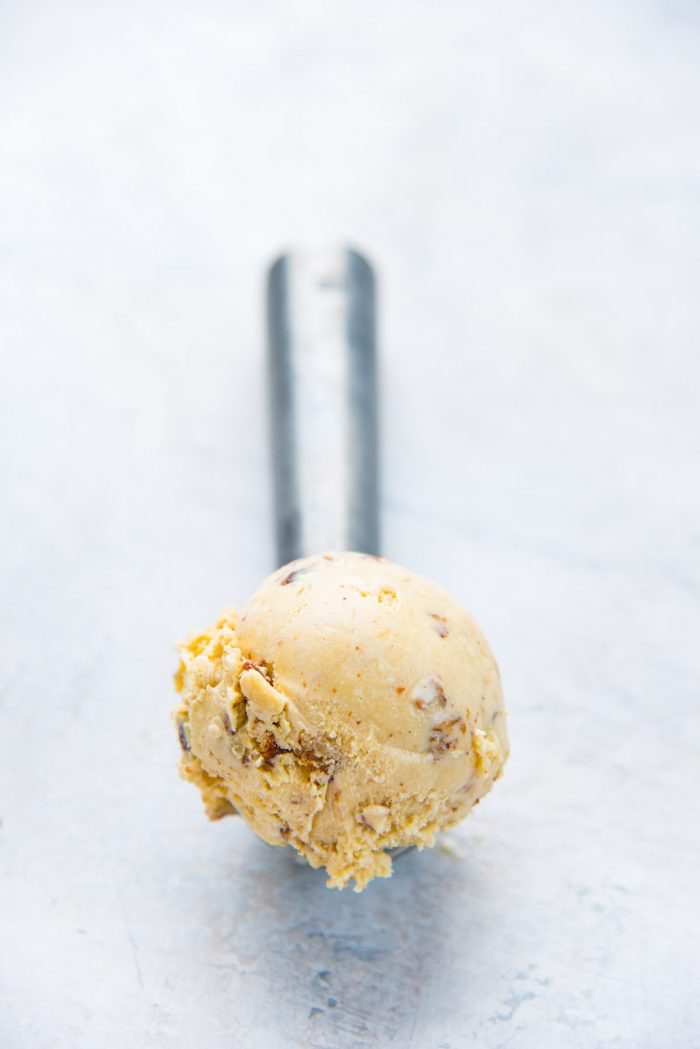 You can serve this butterscotch pecan ice cream with extra chopped pecans, or whipped cream. It’s so rich and decadent though, we never bother with any toppings for this ice cream anyway! 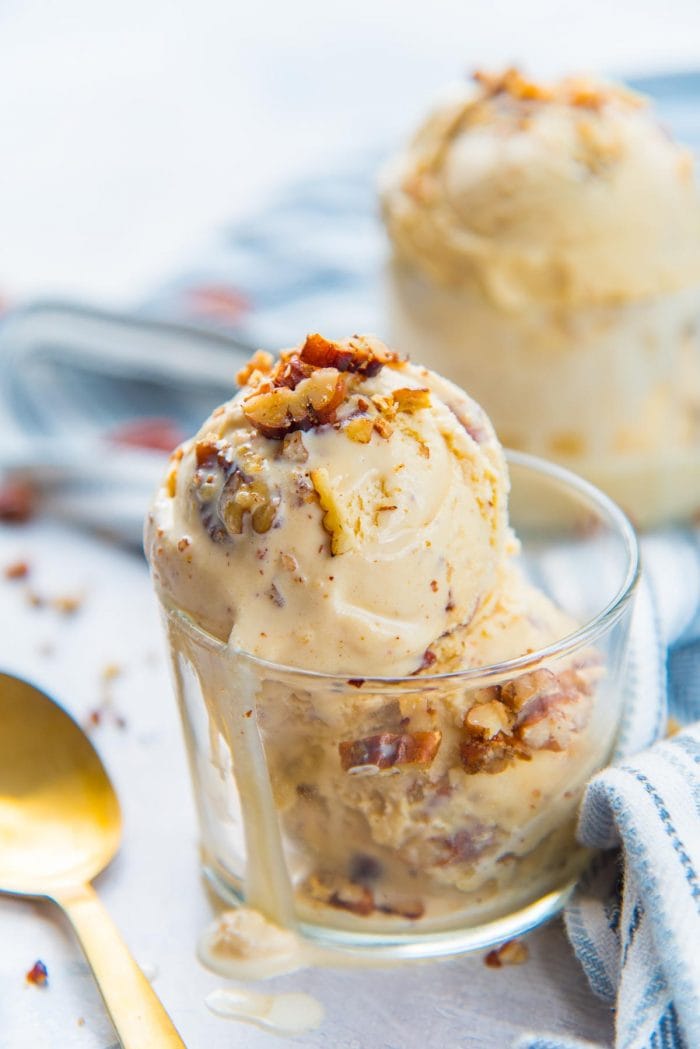 EQUIPMENT NEEDED FOR THIS RECIPE 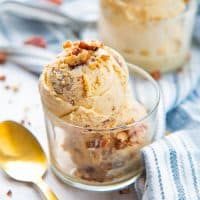 Course:Desserts, Frozen Desserts
Cuisine:American, Worldwide
Keyword:Brown Butter, Butterscotch, Ice Cream, Pecans
Did you make this?Tag me on Instagram!I love seeing what you’ve made! Tag me on Instagram at @TheFlavorBender or leave me a comment & rating below.