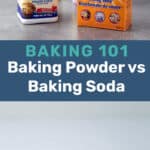 One of the most fundamental aspects of baking is that of chemical leaveners. Specifically, baking soda and baking powder. In this post, I break down everything you need to know about baking soda vs baking powder, and the chemistry behind them, and when to use each.

Everything you need to know about how baking soda and baking powder work, and how they differ, and why that’s so important!

Here’s a quick refresher on what chemical leaveners are when it comes to baking and cooking.

Ingredients that are added to a recipe to give them lift or rise in the final product are called leaveners. Leavening also adds volume by creating a matrix (or the crumb texture), that makes the food light and tender.

All these types of leaveners act in a similar manner.

What are chemical leaveners?

Chemical leaveners are essentially ingredients that rely on chemistry to produce CO₂.

The most common chemical leaveners available are,

What is baking soda?

Baking soda is pure sodium bicarbonate, which is an alkaline chemical.

When mixed with an acid, sodium bicarbonate produces CO2 (carbon dioxide). Baking soda is added to recipes, along with an acid, so that the chemical reaction yields CO2, which provides lift and adds volume.

Types of acid that can be added to recipes to activate baking soda,

So, if a recipe has baking soda as a leavening agent, the recipe MUST include an acidic ingredient to activate the baking soda to create CO2. When baking soda reacts with the acid, you get CO2 and salt residue.

Pros and cons of baking soda

Since baking soda can be activated with the addition of an acid and water, the CO2 works VERY quickly. This can be great for goods like pancakes where you’ll be cooking them as soon as you make the batter.

However, this is a negative when it comes to some other baked goods where the batter sits on the counter for too long before being cooked. For example, when you’re making separate cake layers, and some cake pans have to sit on the counter until the rest time is done. The batter that has to wait will have less rise than the previous batch in this case.

More acidic ingredients will also react faster than others. Plus, the baking soda will react even faster in a thinner batter. A faster reaction means the batter will have the most CO2 as soon as it’s mixed.

Depending on the acid you use, the reaction from the baking soda will be different. Some of the acids in the above list are more acidic than others. The ingredients that are more acidic will produce more CO2. So if you were to substitute one acid with another, the results may vary.

Risk of an aftertaste

So getting these proportions correct is crucial for the final result.

What is baking powder?

Baking powder is a mix of sodium bicarbonate with an acid (or acids, or acid-salt) and cornstarch. So baking powder contains BOTH the alkaline AND acid substances in dry form. Cornstarch is an anti-caking agent.

Single acting baking powder isn’t used widely in home cooking. It’s called single acting because the baking powder contains a straight powdered acid that will dissolve with water and immediately react with the sodium bicarbonate and produce CO2. It does not require heat.

In double acting baking powder, the acid is added as a salt, like cream of tartar. For example, cream of tartar is an acid salt that becomes an acid (tartaric acid), with water. When double acting baking powder is mixed with liquids, the acid salt splits into an acid and a salt. When heat is applied, the rest of the acid salts are activated to release acids. So the acid and alkaline react to produce CO2 at two different stages. For simplicity, I will refer to acid salts as an acid here.

Types of acids that are added to baking powder (double acting)

The first two ingredients are fast acting where most of the acid is released in the early stages of mixing. The latter three are slow acting, where heat is required to release the acid and most of the CO2 is produced during the bake time. Double acting baking powder usually contains a fast acting and slow acting acid.

What is used in widely available baking powder?

My preferred brand is Fleischmann’s baking powder or Bob’s Red Mill as they have a fast acting AND a slow acting acid, balancing the CO2 release in two stages.

Pros and cons of baking powder

Baking powder is what I prefer over baking soda. Here’s why.

There’s already an acid contained in the baking powder. So you don’t have to add an extra acid to activate the sodium bicarbonate.

Baking soda is made to produce a minimum 12% carbon dioxide in weight. So it’s pretty consistent in how much gas it will add to the batter. So there is no variability in the CO2 production between different types of baking powder brands.

Rate of reaction can vary between brands

Risk of tasting funny is low

Since baking powder already includes acid, it carries less of a risk of making your baked goods taste salty or soapy.

Both contain sodium bicarbonate as the primary alkaline.

They both require acids to activate and to produce carbon dioxide.

They are both great at leavening in baked goods.

Excellent at tenderizing cakes as well. The difference between a dense cake and a tender, light, airy cake can be baking powder or baking soda. This is because of the fine crumb that they create as the batter expands and sets.

However, baking powder already has acid added to the mix.

Baking soda activates with water, and you must work quickly as the rate of reaction is very fast.

Baking powder activates with water AND heat, so it works in two stages.

When to use baking soda

If a recipe has an acidic ingredient, then baking soda is usually used to create the required lift and volume. For example, in buttermilk pancakes, usually baking soda is added to react with the acidity of buttermilk.

Without an acid in the recipe, the baking soda cannot be activated. If there is no acid to neutralize the baking soda in a recipe, you will absolutely end up with a cake or baked good that tastes soapy or metallic.

Since baking soda is more potent, you need less to create the same rise. But make sure to add enough acidity to neutralize the base.

When I first tested my chocolate bundt cake recipe, I used baking powder and dutch cocoa powder. While this cake was DELICIOUS, I wanted the cake to rise more and have a lighter crumb. So I switched to baking soda and natural cocoa powder, and this created a cake that was still moist, but not at all gummy or dense. The flavor was amazing AND the crumb was light too.

If a chocolate cake recipe is using natural cocoa powder, then it’s pretty common to see baking soda as the leavener, because the acidic cocoa powder will react with the baking soda.

When to use baking powder

Baking powder is used in recipes with OR without an acidic component. You don’t have to rely on an acid addition to react with the baking powder.

If a chocolate cake recipe uses dutched cocoa powder (which is NOT acidic), then it is more likely that the leavener is going to be baking powder.

Why are both used in recipes?

I like to use a combination of both in my recipes sometimes. These recipes usually have some acid ingredient (buttermilk, vinegar, cocoa powder etc), but the baking soda alone isn’t enough to create the desired rise that will result in a light crumb. In these recipes, adding a little baking powder to increase the lift is recommended.

How to store and test freshness

All chemical leaveners should absolutely be stored in airtight containers. These can be stored at room temperature as well. Baking soda will also absorb odors around it, which is why it’s used as a deodorizer in the fridge or freezer.

How to test freshness of baking soda

The shelf life of baking soda is usually 6 months once opened (about 12 – 18 months, unopened). However, you can still use it if it’s fresh.

Place about 3 – 4 tbsp of white vinegar in a small bowl. Add 1/2 tsp of baking soda to the vinegar and stir. If the baking soda is fresh, it should bubble vigorously.

How to test freshness of baking powder

Shelf life of baking powder is also about 6 months. Baking powder tends to lose freshness faster than baking soda. You can test your baking powder freshness before using it to make sure it’s still active (if you’re not sure how long it has been since it was opened).

Place about 3 – 4 tbsp of warm water in a small bowl and add 1 tbsp of vinegar to it. Add 1 tsp of baking powder to the mix and stir. If the baking powder bubbles well, then it has not expired, and should still be good to use.

Substituting these ingredients is a little tricky.

If you don’t have baking soda, you can in theory use baking powder as a substitute. However, you’ll need to use four times as much baking powder.

However, this could also slightly change the flavor of your baked product. Baking powder is already a little salty, so you will need to reduce the salt in the recipe by about half.

If you don’t have baking powder, you could in theory use baking soda. However, you will also need to estimate how much acid to add along with the baking soda. Some resources say that,

You could also use white vinegar or cider vinegar or even lemon juice – however the acidity will vary yielding variable results with baking soda.

I personally do not like to, nor do I advise my readers to substitute between the two, unless a recipe specifically says that you can. Here’s why – there is absolutely no way to guarantee how well the recipe turns out with that substitution. There is too much variability with an ingredient change like this, and the final result could very well be a salty, soapy, inedible baked good. Not good.