Juicy, slightly sweet, slightly spicy and well seasoned ground pork filling mixed with deliciously caramelized apple and roasted fennel spice, wrapped in a golden brown, buttery, flaky puff pastry. Up your sausage roll game with these Caramelized Apple and Fennel, Pork Sausage Rolls. These will be THE BEST SAUSAGE ROLLS you ever make! So I heard that the USA is unfamiliar with these things. What the hell? That’s unacceptable! Time to change that! 🙂

While that may not be true for all Americans, I feel like those who don’t know about it might be seriously missing out on some amazing comfort food magic! Wikipedia calls it as a British savoury pastry snack that’s popular in many commonwealth countries, which I can totally attest to. I present to you, the wickedly delicious, Sausage Roll! What is a sausage roll you ask? It’s ground/minced meat (pork, beef, veel, chicken, lamb – whatever!), seasoned and spiced, and wrapped in pastry (puff pastry or short crust pastry sometimes), glazed with some egg wash and then baked to a golden brown, buttery, flaky, all kinds of drool-worthy savoury treat! No, it’s not “rolled sausage” and it’s not pigs in a blanket, though it may look like a closely-related cousin. It’s so much better than pigs in a blanket. It’s hard to beat a flaky, buttery, well-seasoned sausage roll, warm out of the oven. Very hard. Maybe even impossible.

Today I’m going to give these an even more flavourful twist by making Caramelized Apple, Fennel and Pork Sausage Rolls! Deliciously caramelized sweet apple and roasted fennel spice (with undertones of mint), mixed with pork – to give you a well seasoned, sweet, juicy, slightly spicy and spiced pork filling that’s wrapped in a buttery, flaky puff pastry.

If you haven’t had sausage rolls before, there’s really no time to waste. 🙂

Just like Wikipedia says, sausage rolls were a quintessential part of my childhood while growing up in New Zealand and later in Australia. As kids, this was one of our absolute favourite party snacks and as adults, it was an easy to make, yet delicious meal when you were short on time and cash. These are widely popular in cafes, and available in supermarkets in frozen form, so all you got to do is bake ’em at home and serve fresh for lunch/dinner, for guests or at parties as a snack/appetizer. I can’t even recall the number of times I used a couple (or more, there may have been more) of these to substitute a full meal aaand… 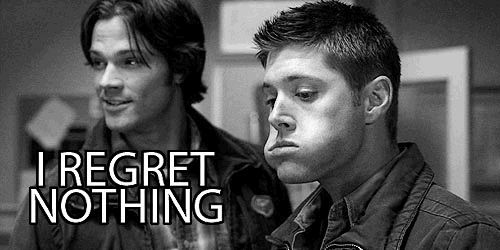 Something this good needs a bit of love, which is why I’m not going to just take some minced meat and then slap it on a pastry, bake it and be done. Nope, no can do.

The caramelized apple and fennel take these to a whole new gourmet level, so that a glass of wine would not be out of place next to a plateful of these. Notes about the recipe –

Caramelizing apples adds another layer of flavour to the sausage rolls. Apple sauce was an option, but that would have integrated with the pork filling too much and not given me a distinct apple flavour. So I went with bits of caramelized apple that gave me bursts of delicious flavour, every time I bit into the roll.

The apple was cut into really small 1 cm thick batons and then sliced thinly. These pieces, when caramelized, didn’t interfere with the integrity or the consistency of the pork filling, since you don’t want a separated or crumbly sausage filling either. You want it nice and smooth, juicy, without large pieces of anything. I achieved that with the really small pieces of caramelized apple, while adding a wonderful sweetness to the filling too.

And to balance that sweetness, I added roasted fennel that was ground to a powder (or you can use already ground fennel powder). This has undertones of mint, along with some chilli flakes for some heat.

Plus I added some breadcrumbs with some melted butter to keep the pork really nice and juicy. Since I used lean pork, it won’t be too much to do this, so that you don’t end up with a dry sausage filling. 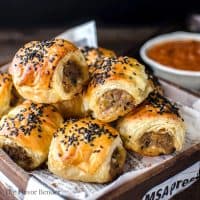 FREEZING - You can make these sausage rolls ahead of time and freeze them, covered with plastic wrap (before brushing the tops with egg wash and baking) on a sheet pan, and then once they are frozen, store in a box with parchment paper between separate layers. Then a few hours before you need to serve, set them out on a baking tray (covered) and defrost, brush with egg wash and bake as per the recipe. If you bake them from frozen, they will take a longer to bake.
Did you make this?Tag me on Instagram!I love seeing what you’ve made! Tag me on Instagram at @TheFlavorBender or leave me a comment & rating below.

You can make these Sausage Rolls with Homemade Rough Puff Pastry, instead of store bought too! Here’s my go to recipe to make my own Easy Puff Pastry! 🙂 Did I mention how great these taste? Well, I think it bears repeating. 🙂

You can serve these with some ketchup or tomato sauce on the side (I made some from scratch), but personally, I very much prefer eating them without any kind of dipping sauce. Too much ketchup or dipping sauce can hide the flavours of the apple, fennel and pork filling. Adding finely sliced apple is so much better than adding apple puree, because you can still taste the caramel and the apple quite distinctly. They add a subtle sweetness that’s present throughout the pork filling, so that you can taste it in every bite. The fennel adds a nice spicy freshness too.

So if you’ve never had sausage rolls before, go ahead and give these a try. You too will regret nothing. Nothing! If you liked this caramelized apple and fennel, pork sausage rolls recipe, don’t forget to subscribe for new (and free) recipes and updates by entering your email address below (and get all these recipes delivered straight to your inbox), so you don’t miss out on a thing. You can find me on FACEBOOK, TWITTER, INSTAGRAM, PINTEREST and GOOGLE-PLUS too.