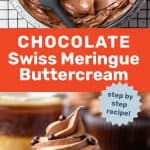 Learn how to make delicious chocolate Swiss meringue buttercream that is buttery, chocolatey, creamy, and perfectly spreadable and pipeable! This is a step by step troubleshooting guide to perfect your chocolate SMBC.

This guide will show you how to make the best chocolate Swiss meringue buttercream ever!

Why you should try this recipe

Prep the bowls and utensils

To remove any residual fat in the bowls and utensils, you can wipe them with a paper towel dampened with white vinegar OR use a lemon slice. Then wipe them clean with dry, clean paper towel or cloth napkin.

Get the ingredients ready

Egg whites are one of the main ingredients in SMBC. They need to be separated from the egg yolks carefully. Any fat in the whites means that they will not turn into meringue.

Eggs are much easier to separate when they are cold. So, if you choose to, you can separate the eggs while they are still cold, but leave the egg whites (in a clean, dry bowl) at room temperature till they warm up to room temperature. 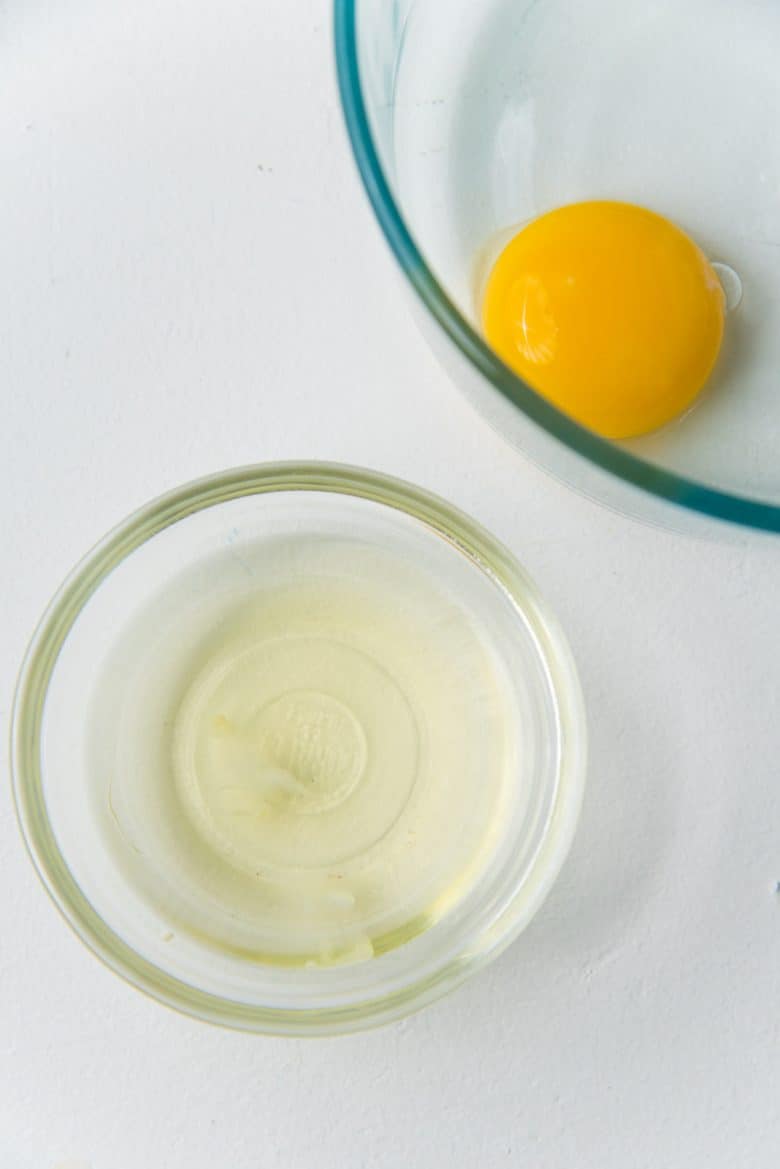 I always use unsalted butter for almost all of my baking. This lets me control the salt content in my recipes.

The ratio of sugar to egg whites (by weight) that I like to use is 2 : 1. That not only gives the perfect sweetness, this ratio also provides the most stable meringue.

Since the majority of the flavoring comes from melted chocolate, these flavoring options are technically optional. BUT they REALLY do enhance the flavor of the buttercream!

Prepare the egg white and sugar base for the meringue.

Place the room temperature egg whites and sugar in the clean, dry bowl. Whisk to combine.

Place the bowl over a pot of simmering water, and cook the egg white – sugar base. This is a makeshift double boiler. Make sure you keep whisking the egg white mixture while heating it to prevent the egg whites from cooking and coagulating.

Check if all the sugar is dissolved by rubbing the egg white mixture between your fingertips to make sure there are no granules.

Whisk it on high speed. The egg whites will transform from a frothy mix to a marshmallow-like, glossy mixture that has doubled in volume. The eggs need to be whisked until the mix has cooled down A LOT. This whisking process can be long, and by the end of it the meringue will be at stiff peak stage as well.

Once the meringue is at stiff peaks, AND it has cooled down to about 90°F (ideally about 80°F), you can start adding the butter. The bowl should feel cool to the touch at this stage, and this process can take between 10 – 20 minutes.

Now you can start adding the room temperature butter. You can switch to a paddle attachment if you like, but you can also keep using the whisk attachment.

Add the butter, 1 tablespoon at a time, and mix in the first addition before adding the next portion. If the meringue base is warmer than it’s supposed to be, then it’s absolutely OK to whisk the mixture a little longer in between adding butter.

The meringue will turn runny at first but it will transform into a creamy, smooth, fluffy buttercream. Just keep adding all the butter and continue beating the buttercream.

How to store the buttercream for later

Once made, the chocolate Swiss meringue buttercream is ready to be used immediately. However, if you want to store it for later, you can do that too.

If I know I’m going to be using the buttercream the folllowing day, then I’ll simply cover the bowl with plastic wrap and keep it in the coolest part of my house.

If I know I’ll need it within the week, then I’ll cover the bowl with plastic wrap and store in the fridge.

For anything longer than a week, or up to 3 months, you should store the chocolate Swiss meringue buttercream in the freezer.

If you store the buttercream in the fridge or freezer, allow it to return to room temperature before using. It should be at about 70 – 73°F. Then, mix the buttercream in your stand mixer, with the paddle attachment, until creamy.

This usually happens after some of the butter is added. The buttercream cools down rapidly and the cool butter doesn’t mix in well with the meringue base. This causes the chocolate buttercream to look curdled. Keep adding all of the butter, and keep whisking the buttercream. The whisking will warm up the mixture and it will become smooth again. Just be patient.

This is because the buttercream base is too warm and it softened the butter too much. The buttercream should be at 70 – 72°F (21 – 22°C) at the final stage. If it’s warmer than this, then the buttercream will be on the soft side, or even soupy/liquidy.

The bowl shouldn’t feel warm to the touch when you start to add the butter. If it’s too warm, this can melt the butter too quickly resulting in a soupy buttercream.

My buttercream has hardened too much

So you stored the buttercream in the fridge and now it’s too hard? You left it out to come to room temperature and it’s still not soft or creamy like when you first made it?

If the buttercream is at 70 – 73° F, then just whip it with the paddle attachment and it SHOULD become creamy. But is it still colder than this?

Here’s a trick that I use for when that happens. Take a small portion of the buttercream (about 1/2 cup, or more depending on how much buttercream you have) and heat it in the microwave just a little. Add this warm buttercream back into the cold buttercream and start mixing it with the paddle attachment in your stand mixer.

The idea is to let the warm buttercream portion help warm up the rest of the buttercream to the right temperature and return it back to a creamy consistency.

You can see even more troubleshooting points in my basic Swiss meringue buttercream post here.

Use a thermometer – using a thermometer will take the guesswork out of the process, and tell you exactly when the meringue is ready at different stages. This can prevent your buttercream from being a soupy mess at the end.

Make sure all the bowls are clean, dry and free of any residual fat. Any fat will prevent the egg whites from whisking properly.

Take your time – This isn’t a difficult recipe, but many people mess it up because they rush through the steps. Be patient. Whisk the egg whites longer if it’s too warm. Don’t dump all the butter in too quickly.

The final buttercream temperature should be at 70 – 73° F (21 – 22° C). At this temperature, it’s perfectly spreadable and pipeable. If it’s warmer than that, the buttercream will be really soft and harder to pipe shapes with. If it’s much colder, then it won’t spread as readily.

This chocolate Swiss meringue buttercream is perfect for those who want a creamy, stable buttercream that is not too sweet. With American buttercream, you need to add more confectioner’s sugar to make it stable, which makes it too sweet.

This buttercream is perfectly spreadable, soft and not too sweet with a rich, deep chocolate flavor. But since this is made with quite a bit of butter, it doesn’t do well in hot climates as it can melt quite easily.

I can very confidently say that this is easily one of my favorite buttercreams ever! I LOVE working with it, because the result is just so light and creamy.

It’s perfect for cupcakes, vanilla cakes, chocolate cakes and anything else you’d use a chocolate buttercream frosting recipe for!

If you liked this recipe, then you may also like 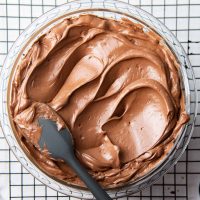 Author: Dini K.
Yield: about 8 cups (enough to generously frost and fill a 2 layer, 8 inch cake)
Cuisine: American, European, North American
Learn how to make chocolate Swiss meringue buttercream with this comprehensive guide and step by step recipe! Get perfect chocolate buttercream every time.INTERMEDIATE - Once you've conquered American buttercream, this would be the next buttercream to try. This is easier than you think, and becomes even easier after the first attempt!Serving information - This is enough to frost and decorate one 8 inch or 9 inch two layer cake. This recipe will also be just enough to frost an 8 inch 3 layer cake, but may not be enough for elaborate decorations. This recipe will frost about 40 cupcakes. Use metric measurements / weights to get consistently accurate results.
Prep: 15 minutes
Cook: 30 minutes
Total Time: 45 minutes
Difficulty: Intermediate
Servings: 40 servings (3 tbsp)
Print Rate

Preparing the meringue base

This will generously fill and frost a 2 layer 8 inch cake, with some leftover buttercream for decorations. If you want to frost and fill a 3 layer cake, this will be JUST enough. Make 1.5 times this recipe if you want extra buttercream for decorations (change servings to 60 servings in the recipe card). This recipe is enough to frost about 40 cupcakes (with approximately 2 - 3 tbsp worth of frosting on top).  If you want a sweeter chocolate frosting, replace the bittersweet with semisweet chocolate.