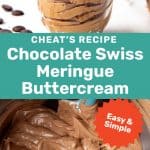 Just as good as the classic version, this faux chocolate swiss meringue buttercream is easy and delicious!

The difference between easy swiss meringue buttercream and the classic version

Classic swiss meringue buttercream relies on the meringue base to add air to the buttercream, which makes it incredibly light and fluffy.

However, this easy version is made with pasteurized egg whites from a carton. This doesn’t really form into a meringue, so you rely on air that has been whipped into the butter instead. The result is a faux swiss buttercream that is slightly more dense and buttery, but just as delicious and fluffy!

I recently shared the vanilla version for this cheat’s swiss meringue buttercream. There I provide more details on the method and how it differs from the classic version.

With this chocolate version, the melted bittersweet chocolate not only adds a deep chocolate flavor, it also makes the buttercream lighter and creamier!

All you need to make this chocolate frosting recipe

The first step is to melt the chocolate

Set aside until cooled down, but still remains liquid.

You can also melt the chocolate in the microwave, in 20 second bursts.

Next, prepare the egg white and sugar base.

When the chocolate is at the right consistency and temperature, you can start making the faux swiss meringue buttercream.

Whisk the pasteurized egg whites and confectioner’s sugar until thick, glossy, and white.

I do this in my stand mixer, with the whisk attachment, to save time and energy. Then I transfer the egg white mix into a bowl, so that the mixer bowl is free to whip the butter.

Place the soft butter, salt, and vanilla in the mixing bowl, and whip until really light and fluffy. You can use the same whisk attachment for this as well.

You can also use coffee extract instead of vanilla if you prefer.

Stream in the egg white and sugar mixture while whipping the butter. Whisk it in until the egg white mixture has fully incorporated with all the butter, and the swiss meringue buttercream looks creamy and fluffy.

If it still looks a little stiff, not to worry! The melted butter is going to help loosen up the buttercream mixture and make it even more light and fluffy.

Mixing in the melted and cooled chocolate

You can also add the chocolate directly to the butter while whipping it before adding the egg white mixture. It won’t make a difference in the final outcome.

Can I make this with raw eggs?

Yes, you can! You can even make this with raw eggs that have some yolk in them.

And you don’t have to throw out the egg white and sugar mixture that didn’t quite form into a meringue for whatever reason. You can still make this easy swiss meringue buttercream version using that!

With raw eggs, you will need to heat it to 160 F, over a double boiler, so that the eggs are pasteurized and the sugar is dissolved. Make sure the egg white mixture cools down to room temperature before you add it to the butter.

Can I use cocoa powder instead of melted chocolate?

Substitute the melted chocolate with 1 oz (1/4 cup) of cocoa powder, mixed with 1/4 cup of hot water or milk. Make sure to let it cool down to room temperature before adding it in.

How to use this chocolate buttercream frosting

Here are some great ways to use this easy swiss meringue buttercream recipe to frost cakes and cupcakes! 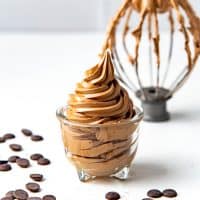 Author: Dini K.
Yield: About 650 g (2 ¾ – 3 cups)
Cuisine: American, North American
This faux chocolate swiss meringue buttercream is much simpler to make, and just as good as the classic version! Learn how to make creamy, buttery, and very chocolatey swiss meringue buttercream with this quick and easy recipe.EASY – This chocolate buttercream is very easy to make. Perfect for beginners, who may find classic swiss meringue buttercream a bit daunting. For the easiest version, use carton egg whites and confectioner's sugar. Serving InformationThis recipe will make 2 ½ cups of frosting. Which will frost 15 – 17 cupcakes (about 3 tbsp per cupcake). Or more cupcakes with less frosting. You will need to make about twice the amount to frost a two layer 8 or 9 inch cake.
Prep: 30 minutes
Cooling time: 2 hours
Cook: 10 minutes
Total Time: 40 minutes
Difficulty: Easy
Servings: 15 servings
Print Rate

You can use raw egg whites that have been contaminated by egg yolks for this recipe.

I like to add ½ tsp because I prefer a sweet and salty buttercream. If you use salted butter, then skip the added salt.