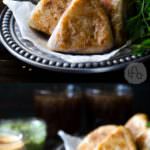 Curried ground beef with peas and potatoes, wrapped in a delicious roti and cooked on a griddle or nonstick pan till golden brown and crispy. These warm, Spicy Curried Beef Roti are authentic Sri Lankan street food that are perfect for game day and tailgating! We’ve been on an awesome Sri Lankan food kick lately. Maybe it’s because the cool, crisp Fall air is finally blowing in and we are craving comfort food. I thought I’d be craving for some creamy Mac n Cheese (not ruling it out, just yet), but we seem to be turning to our roots, instead. I made a huge batch of Sri Lankan Curry Powder recently, and we have been feasting on some delicious curries – not limited to Sri Lankan curries, but also Thai green and red curries and Indian curries too. Fall also means sports, tailgating, plenty of game days and food that’s worthy of feeding a crowd. And when Mr K sat down in front of the TV for the NBA season opener a few days ago, I had one amazing game day snack waiting for him – Sri Lankan Stuffed Curried Beef Roti!

Curried ground beef with peas and potatoes wrapped in a roti and cooked on a griddle to seal the wrap. This curried beef roti is straight up Sri Lankan street food that you can find with ease anywhere you go in the country. They are eaten warm usually with a tomato sauce or fiery chili sauce, but here I made a curry yogurt sauce and a spicy cilantro sauce in place of a dipping sauce.

October is also tailgating snacks month – organized by Debi from Life Currents too and I decided to bring something from our snacking culture to celebrate along with a few other fantastic food bloggers. 🙂 Just scroll down to see what everyone else brought to the party!

The roti dough used in this recipe has different names in different parts of South and South East Asia – Sri Lankans call it godhamba roti, Malaysians call it roti canai, Indians call it paratha roti. Whatever the name, it’s a delicious non-flaky roti that’s perfect for encasing that flavorful filling.

Like I said, these stuffed roti are a hot commodity in Sri Lanka. They can have different fillings – vegetarian and fish being the most popular. But since Mr K lives beef, I made a curried beef roti instead.

These snacks are an integral part of the Sri Lankan food culture. No matter where you go in the country, you will find different variations of Sri Lankan savory snacks (locally referred to as short-eats). They are like the Sri Lankan version of tapas. They range from stuffed roti like these, to deep fried crepes, cutlets (croquettes), pastries, patties (empanadas), to stuffed chiles and so much more! The flavors, the aromas, the textures are all very representative of the country’s food.

I can’t tell you how many great memories I have of sneaking off to eat short-eats with my school friends back in the day. They were these little morsels of comfort and deliciousness that were also very affordable. Although unfortunately that affordability seems to be a thing of the past now, because the last time Mr K and I were in that neck of the woods, they were ridiculously expensive – didn’t stop me from stuffing my face with them though.

These stuffed roti are special for me for another reason – I made stuffed vegetable roti all by myself, in front of the family, in my grandmother’s kitchen when I was in grade school. It was the first recipe (which I learned in school) I made for the whole family, by myself with no help, and the nostalgia is pretty strong with that memory. 🙂 What the hell is godhamba roti?

Godhamba roti or roti canai is easy to make but takes a bit of patience. The dough is known for its soft, flaky texture and is seriously addictive. It’s a simple dough that’s kneaded and allowed to rest overnight after being coated with oil and then stretched out thin (to the point of being almost see-through). The kneading and the oil-covered resting period build the gluten structure and soften the dough, which helps you stretch the dough for cooking. The oil also helps keep the roti nice and flaky for canai or paratha.

From this point, there are a few different ways in which you can cook this dough.

The stuffing for this spicy beef roti is also really easy, and easily adaptable.

When you add cooked potatoes, just don’t mash it all into the filling. I especially like having bits and chunks of potatoes to bite into, in the spicy filling. The roti can be shaped into whatever shape you want or find easy to form. Traditionally, different fillings are shaped differently in Sri Lanka so that it’s easy to identify which ones are vegetarian and which ones are fish and so on. I made triangles, but you can do squares, rectangles, rolls, rounds or whatever kind of geometry you fancy.

These stuffed beef roti are really great for something creative and fun for game day or tailgating! They are like a Sri Lankan version of burrito or wrap, except they are sealed and the dough/roti itself is addictive! You can make these ahead of time and then re-heat them in the oven (or on the grill) before serving. The curry dipping sauce is also optional, they are typically served with chili sauce or ketchup. They have such great depth of flavor, you don’t honestly need a dipping sauce anyway. 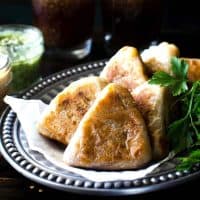 Godhamba Roti (there will be extra dough leftover for plain roti) If you liked this curried beef roti (stuffed Sri Lankan beef roti) recipe, don’t forget to subscribe for new (and free) recipes by entering your email address on the side bar (and get all these recipes delivered straight to your inbox), so you don’t miss out on a thing. You can find me on FACEBOOK, TWITTER,INSTAGRAM,  PINTEREST, YOU TUBE and GOOGLE-PLUS too.