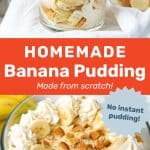 This is the Best Homemade Banana Pudding ever! Even better than the legendary Magnolia Bakery Banana Pudding! More banana flavor, more creamy yet light at the same time, and made from scratch without instant pudding mix!

My first taste of Magnolia Bakery Banana Pudding when visiting New York City several years ago was an absolute revelation. No exaggeration. I had been put off by the thought of banana pudding for the longest time. I didn’t grow up with it, and the ingredients that went into making banana pudding didn’t seem all that appealing to me either.

But of course you can’t find that banana pudding here in Ottawa. So I decided to make my own. Thankfully, they share their recipe online and in their cookbook. I’ve tried that version several times and enjoyed it. But I knew I could do better than that. I wanted to improve on the Magnolia bakery banana pudding. More banana flavor, more creamy, and without instant pudding mix.

So here’s my absolute favorite Homemade Banana Pudding Recipe, made from scratch, WITHOUT instant pudding mix! So you can make this even if you can’t find pudding mix, no matter where you live in the world. And yes, it’s better than the legendary Magnolia Bakery banana pudding.

Components and ingredients in this Banana Pudding

To make this you will need,

Folding in whipped cream will make the banana pastry cream more light and airy as well! But the cream will also make it feel richer. Creamy and light – the best of both worlds.

For stabilized whipped cream, you will need,

To layer the Banana Pudding,

These vanilla wafers are a key ingredient in this homemade banana pudding from scratch. They become almost cake-like when soaked in the pudding base. Nilla wafers are vanilla wafers that can be found very easily in the US. They are not as common in Canada however, so I had to order it online.

So if you can’t find Nilla wafers where you live, you can substitute it with ladyfingers (Savoiardi biscuits).

Can’t make banana pudding without bananas of course. You’ll need bananas in this recipe for both the custard, and for layering the dessert. Use bananas that are just ripe and still a little firm. If you use overripe bananas, they can get mushy in the banana pudding.

How to make the Banana Pudding

My homemade banana pudding recipe is certainly more involved than the Magnolia banana pudding. There are no shortcuts. But it’s absolutely worth your while, at least in my opinion. And maybe you will agree too! 🙂

The first step is to infuse the milk with the flavor of banana. Slice the bananas and add them to the milk. Heat the milk mixture until it just starts to boil or simmer. Remove from the pan and let the milk cool down in the fridge. Let the bananas infuse the milk for about 4 hours, or up to 12 hours.

Next, strain the milk mixture without squeezing the bananas through the sieve. Now you’ve got banana infused milk! This is what you will be using to make a pastry cream / custard. The pastry cream will be very thick because of the addition of extra cornstarch. This is so that the final banana pudding will have the right spreadable consistency after adding whipped cream.

The pastry cream is then chilled in the fridge for a few hours.

This step involves whisking heavy cream until you have stiff peaks and then folding it in with the chilled banana pastry cream. Add gelatin to make this more stable, but this is an optional step.

The banana pudding base should be used immediately.

When the banana pudding base is ready, you can start layering the pudding.

I made my banana pudding in a trifle bowl here. However you can make this in individual bowls or in a shallow baking dish as well (9 x 13 or less).

Spread a layer of the banana pudding base at the bottom of your serving dish. Place the Nilla wafer cookies in a layer on top. I like to make sure that the cookies overlap a little so that there are no gaps.

Follow this with sliced bananas. I personally do not like the banana slices to be visible from outside the bowl. While I do add a generous layer of sliced bananas, I make sure that they are not too close to the side of the bowl. But that’s just a personal preference.

I also break some of the Nilla wafers in half and place them upright against the wall of the trifle bowl – purely for decoration.

Next I follow with another layer of banana pudding base, and repeat with the Nilla wafers, and banana slices, and the wafers against the wall of the trifle bowl. Repeat until you have used up all of your banana pudding, but make sure the final layer is also the banana pudding.

The thinner the layer of banana pudding, the more layers you can get. With this recipe, I get 3 layers in my trifle bowl, with one final layer of pudding on top.

Cover your trifle bowl / baking dish and refrigerate the pudding for at least 1 hour, up to 8 hours.

Just before serving, decorate the dish as you prefer. Add crushed Nilla wafers and whipped cream on top. I only garnish the dessert with fresh banana IF I’m serving the banana pudding right away. This is because the bananas will discolor quickly.

How do I prevent the bananas from discoloring?

Much like apples, bananas discolor once cut and exposed to air.

You can toss them with a little bit of lemon juice if you like to stop them from discoloring. But I don’t like the addition of lemon flavor into this pudding. But if you don’t mind that, then go ahead and use lemon!

I just prefer to cut the bananas just before I use them. I also make sure that the bananas are not exposed to air, and are completely covered by the banana pudding base. This is why I don’t line the side of the bowl with sliced bananas.

As long as you make sure the bananas are completely covered by the banana pudding base, and not exposed – the bananas will retain their color for quite a while in this dessert.

How long can I keep this Banana Pudding in the fridge?

You can refrigerate the banana pudding for up to 3 days after assembling it. This is not counting the day to make the pastry cream, and then chilling the assembled pudding. The pastry cream itself will last about 5 days. However, this is only IF the pudding is kept whole and intact (without cutting into it).

Just be mindful that the bananas will discolor if they are exposed. The pudding will still be good to eat even if the bananas discolor, but it may not look appetizing. So if you’re storing leftovers, make sure to cover the leftovers with plastic wrap to prevent the pudding (bananas) from being exposed to air.

Personally, I keep any leftovers only for an extra day. After that the bananas do tend to discolor and get mushy.

Why I love this recipe!

This is hands down the BEST banana pudding I’ve ever tasted! That’s all the reason I need to love this recipe, really.

That being said, this recipe does require more effort than the simple and classic Magnolia Bakery recipe. But that extra effort is what makes this banana pudding from scratch extra special as well!

This recipe makes the pastry cream from scratch, without using an instant vanilla pudding mix. This means that my readers who are from outside the US can also easily make this at home, and experience the glorious deliciousness of this amazing banana pudding!

The Magnolia Bakery recipe relies only on banana slices for banana flavor, and is a bit too sweet for our liking. But not this recipe. Since the banana pudding base (diplomat cream) is already infused with banana, you can actually just eat the banana diplomat cream on its own. And it tastes freaking incredible!

So if you’re looking for the best banana pudding recipe, that is made from scratch, then look no further. I got you covered! 😀 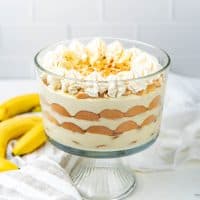 Author: Dini K.
Yield: One large 8 inch trifle bowl (or equivalent)
Cuisine: American, North American
Delicious homemade banana pudding that's made from scratch, using banana infused milk! No instant pudding and no condensed milk. Guaranteed to be the best banana pudding you've ever had! INTERMEDIATE – The recipe itself is easy, but has several components. But each component is easy on its own, but may need some planning ahead of time. US based cup, teaspoon, tablespoon measurements. Common Measurement Conversions. Weight‌ ‌measurements‌ ‌are‌ ‌recommended‌ ‌for‌ ‌accurate‌ ‌results.There is at least one overnight chilling step in this recipe.
Prep: 50 minutes
Chilling time: 16 hours
Cook: 40 minutes
Total Time: 17 hours 30 minutes
Difficulty: Intermediate
Servings: 14 servings (1/2 cup each)
Print Rate

To assemble the banana pudding

This recipe is less sweet than the classic Magnolia Bakery banana pudding. If you want this to be sweeter, then I recommend using 200 – 225 g sugar (1 – 1 ¼ cups).

You will need about 340 g / 12 oz. You may not use all of it, depending on the size of the serving dish and number of layers in your pudding.  If you cannot find Nilla wafers, use savoiardi / ladyfinger biscuits (cookies).

To chill the pastry cream faster

Place the banana pastry cream in a large, shallow dish – I like to use a quarter sheet pan. Spread it evenly in the dish and cover it with plastic wrap. Then place it in the freezer for about 3 – 4 hours to cool it down faster. DO NOT let it freeze overnight, so check on it every hour to make sure it’s not freezing.

Course:Desserts, No Bake Dessert
Cuisine:American, North American
Keyword:Banana Recipes, Custards, Dessert Recipes, No bake desserts, Puddings, Trifles
Did you make this?Tag me on Instagram!I love seeing what you’ve made! Tag me on Instagram at @TheFlavorBender or leave me a comment & rating below.