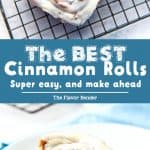 Cinnamon rolls made with a rich, soft, fluffy, brioche-like bread dough, stuffed with a delicious butter-cinnamon-sugar paste, and topped with a tangy cream cheese frosting. Super easy, and can be made ahead of time too!

This is the BEST Cinnamon Rolls recipe you’ll ever have! 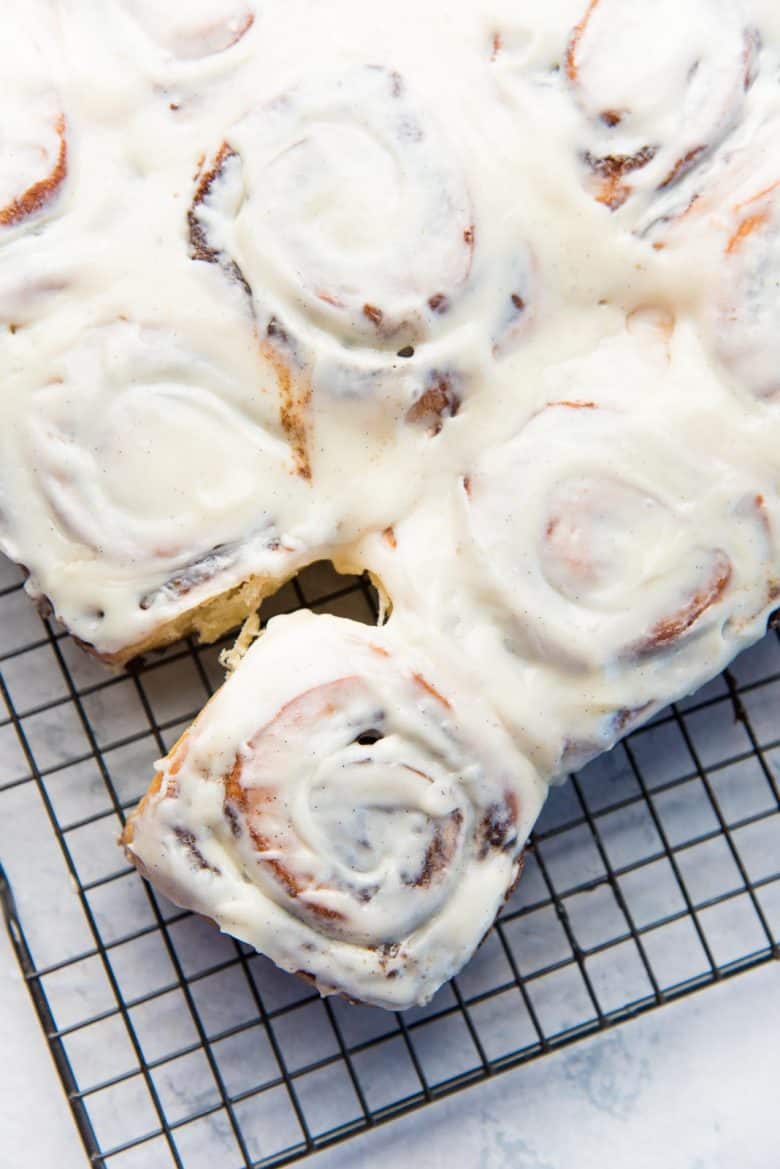 Cinnamon Rolls are not an every day occurrence for us. It’s a special treat, for special occasions. Especially, these cinnamon rolls, because these are the BEST damn cinnamon rolls I’ve ever had! And you will too. 🙂

This cinnamon rolls recipe is a fixture in our household at celebratory breakfasts, like on birthdays, and even on Christmas morning or New Year’s Day. 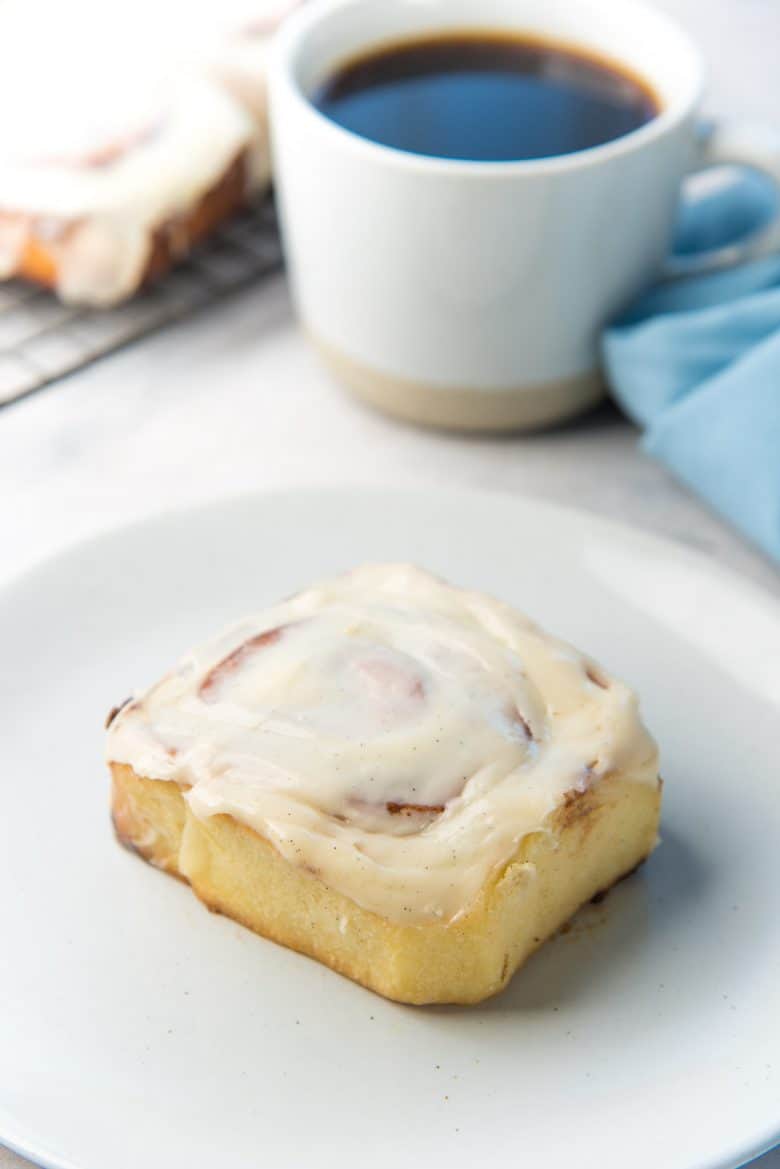 Why this is the BEST cinnamon rolls recipe 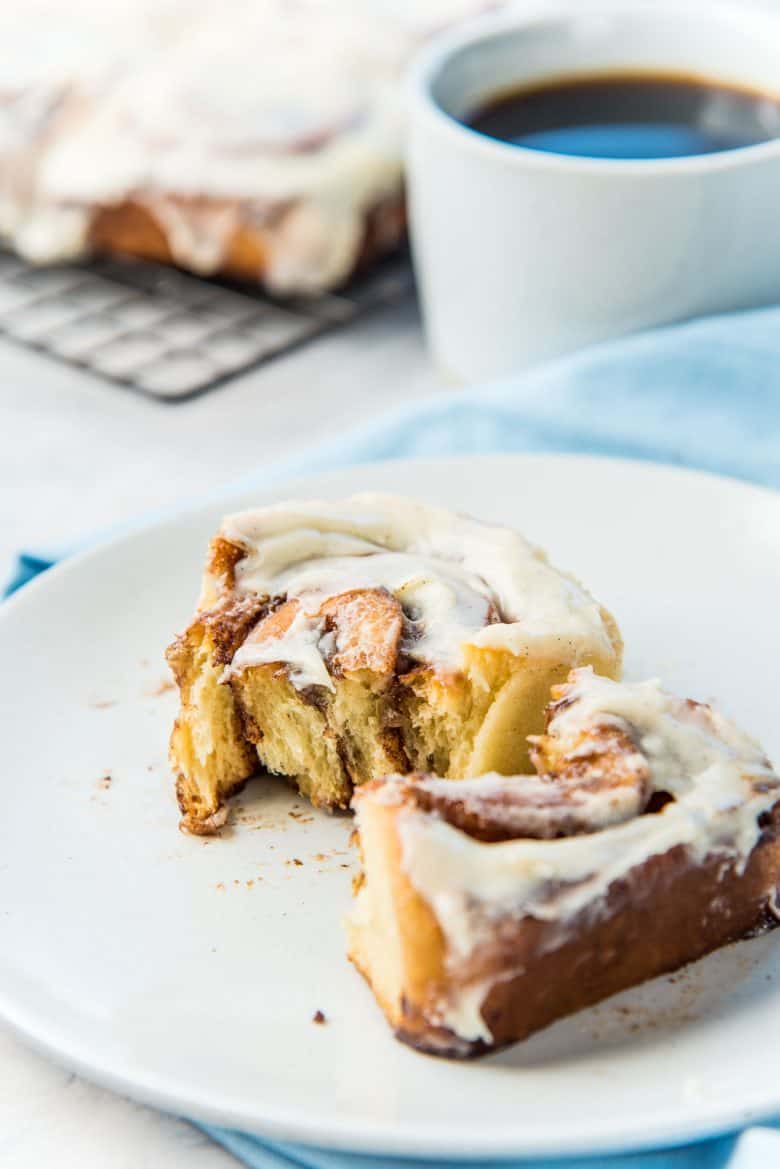 Cinnamon buns are an American classic. Growing up in New Zealand and Sri Lanka, cinnamon rolls were a fixture on American TV shows that I used to watch. It wasn’t until much later that cinnamon buns were available where I lived, and it wasn’t until I moved to the US, that I was able to enjoy a cinnabon in all its glory!

Now I make my own of course. They are eaaaaasy, and taste that much better too! 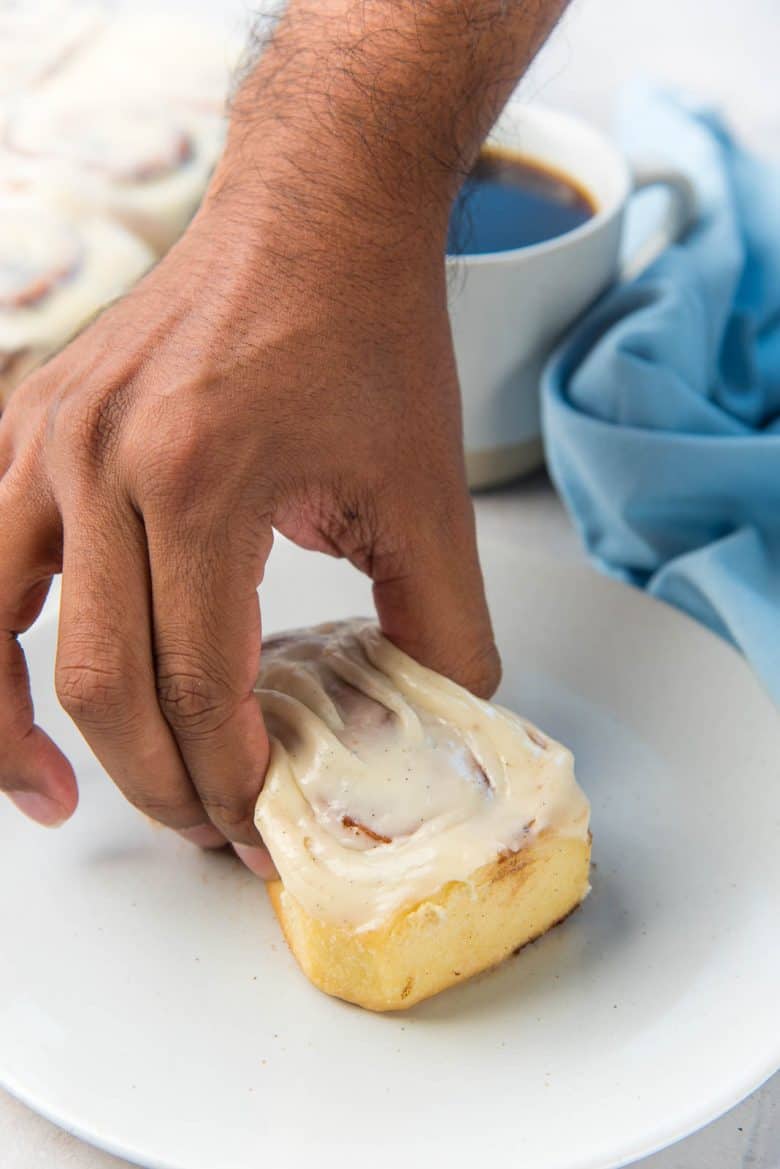 The dough for the cinnamon rolls

After testing this recipe multiple times over the years, I’ve finally found a cinnamon roll recipe that I adore. I’ve tried different types of dough to make these, including my homemade hot dog bun recipe. In the end, there were two contenders for the cinnamon roll dough – brioche dough and milk bread dough.

Brioche is buttery and soft, and the eggs give the buns a subtle richness. The milk bread base on the other hand is also incredibly soft, and so milky and tasty. However, that extra step of making the milk-flour paste is simply not needed for this cinnamon buns recipe, especially with the filling and frosting as well. So I settled on the rich, soft, melt-in-your-mouth brioche dough. Plus, it’s easier to make.

What type of yeast to use

I usually use the active dry yeast with finer granules, which doesn’t need to be activated before being added to the dough. However, if you don’t know or not sure your  dry yeast is fresh or “alive”, then I recommend activating the yeast first in some warm water. If you only have traditional active dry yeast with larger granules, then it definitely needs to be activated first. This is because it doesn’t dissolve as readily in the dough, and activating the yeast will help evenly distribute it through the dough.

When I first started making cinnamon rolls, I made the filling the classic way. Spread softened butter along the dough, then sprinkle the cinnamon sugar mix generously, before rolling up the dough again. But now I much prefer making a butter, sugar, cinnamon paste and spreading this evenly, instead. This ensures an even a mount of filling throughout your cinnamon rolls.

I also love to add a little salt to make the sweetness more balanced. And here’s another little secret/tip – add some nutmeg to the filling. Or even some allspice for a non-traditional, yet nice and subtle spicy kick.

No cinnamon roll is complete without a glaze. Some prefer a drizzle, or a thin coating of glaze. But since I only make cinnamon rolls as a special treat, I want to make the treat worth my while. Which calls for a generous slathering of tangy cream cheese frosting. 🙂

I like to use equal amounts of cream cheese and confectioner’s sugar to make the glaze. This gives you the tangy flavor of cream cheese, without it being overly sweet. The cinnamon sugar filling adds good sweetness, so you want the glaze to complement it by being tart and creamy, instead of even more sweet. 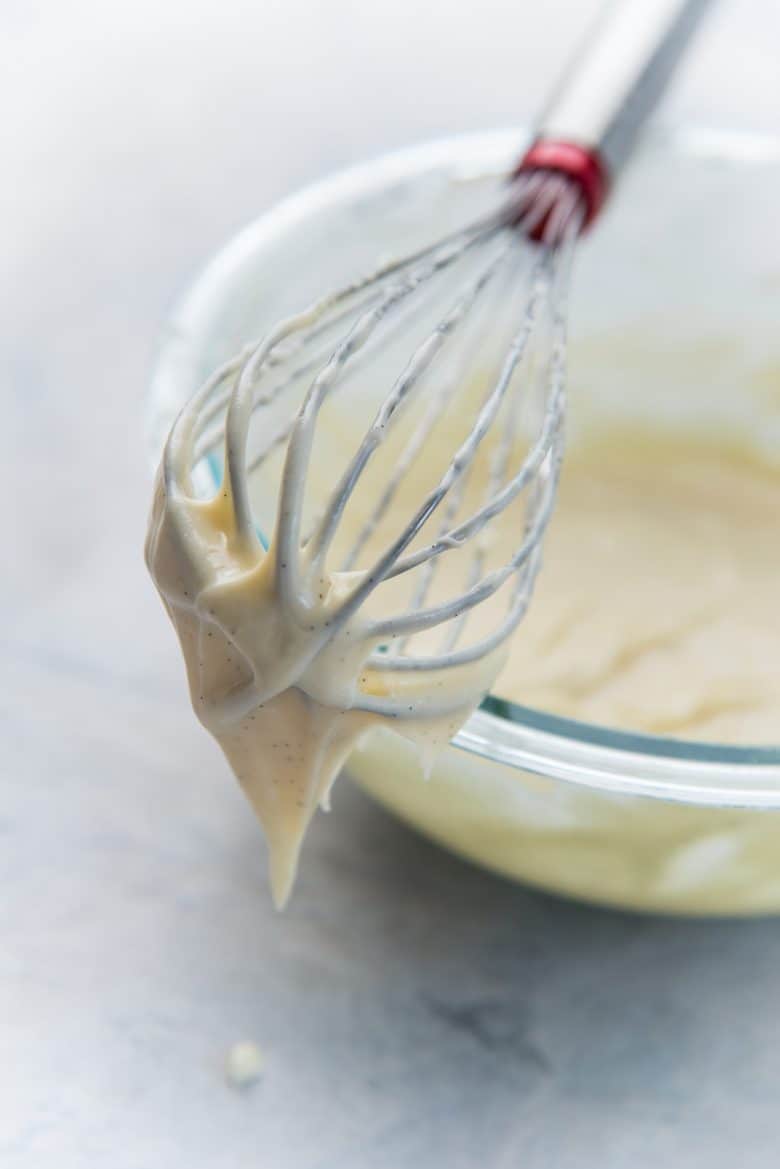 How to make the BEST cinnamon rolls with this easy recipe!

I like to do most of the work for these cinnamon buns a day or two ahead of time. This includes making the filling, glaze, and making the dough and shaping the rolls. This is so that when I want to serve these, all I have to do is bake them, spread the glaze while they are hot, and serve them while still warm.

The filling and glaze can be made in a mixer bowl and stored in separate bowls or ziploc bags. I prefer microwavable bowls, so that I can heat them gently if they harden too much later.

To make the dough – activate the yeast in the milk, with a little sugar.

While the yeast is activating, measure out all other ingredients, and prepare the melted butter. When the yeast is active, add the flour, sugar, salt, butter, vanilla and eggs into the same bowl and mix to form a scraggly dough. Then knead the dough using the dough hook of your mixer until you have a smooth dough.

Since this cinnamon roll dough has butter and yolks, the gluten needs to be worked more for it to develop. So you will need to knead it for about 20 – 25 minutes to get the right dough consistency. But you’ll be doing all this in your mixer, so you can let it mix on low and step away. Just check on it occasionally to make sure it’s kneading well.

When the dough is smooth, shape it into a smooth ball and let it rise (covered) in the mixer bowl until doubled in size. This can take between 1 1/2 hours to 2 hours, depending on the temperature in the house. Ideally, keep it in a warm place (about 70°F / 21°C), so it will proof better.

The proofed dough is now ready to be rolled out, filled and shaped.

On a well floured surface, roll out the dough into a 13 – 14 inch square. Evenly spread the cinnamon butter paste, making sure to leave a one inch margin on one side. Then roll up the dough, and cut it into 12 equal pieces. I like to cut off the edges that have less cinnamon butter in them, but that’s optional.

How to cut the cinnamon rolls for equal portions

First use a knife to mark the portions equally, so you know where you’ll be cutting to make 12 equal pieces. To do this, you can use either a sharp knife or a cotton string.

Sharp knife – if you’re using a sharp knife to cut the cinnamon roll dough, use a back and forth motion to cut, rather than pressing the knife straight down. Otherwise, the filling can squeeze out.

Cotton string – first slide the string along the bottom of the dough roll, and then cross it over the roll on top. Then pull the two ends of the string to section off portions of the dough.

To make clean up easier, remember to line your pan with parchment paper.

Place the cut dough pieces on the parchment paper, with some space between them – enough room for them to expand as they bake. 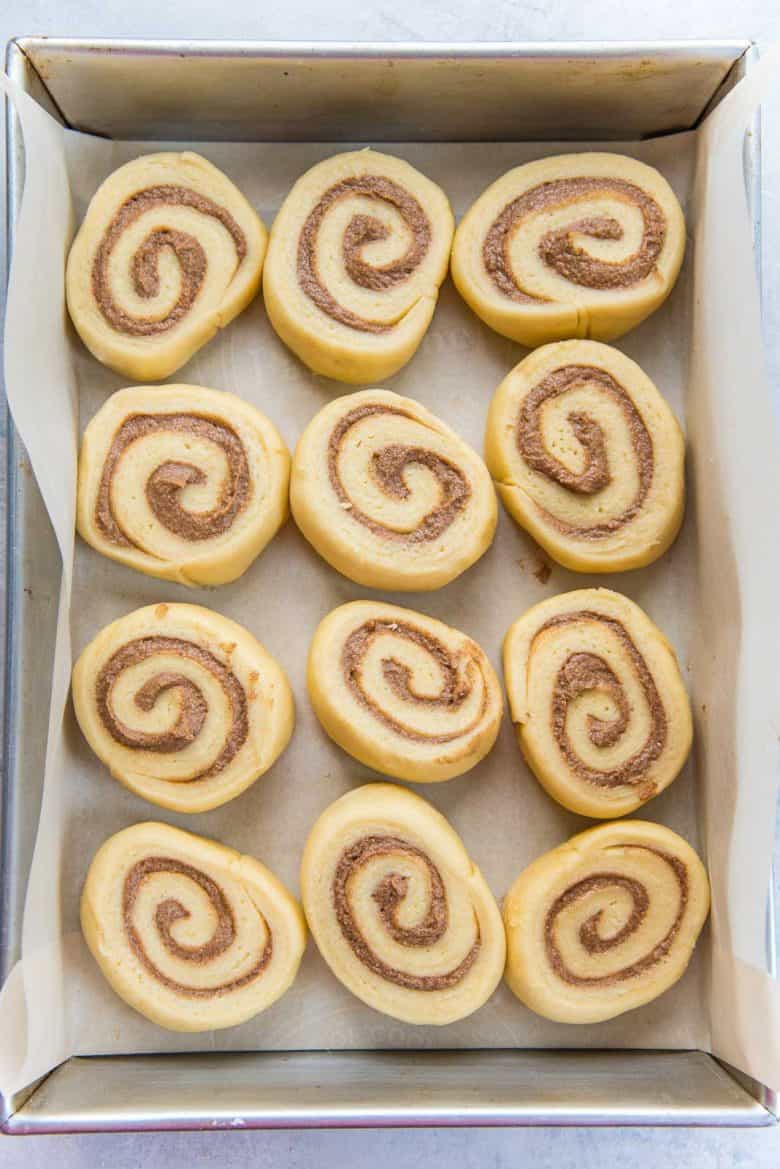 At this stage, you have a choice.

Bake them right away – if you want to eat the cinnamon rolls right away, you can go ahead and bake them in a preheated oven.

OR freeze them for later – if frozen, let the dough thaw overnight, and then bake in the oven. This is a great option if you want to make your cinnamon rolls them well ahead of time. 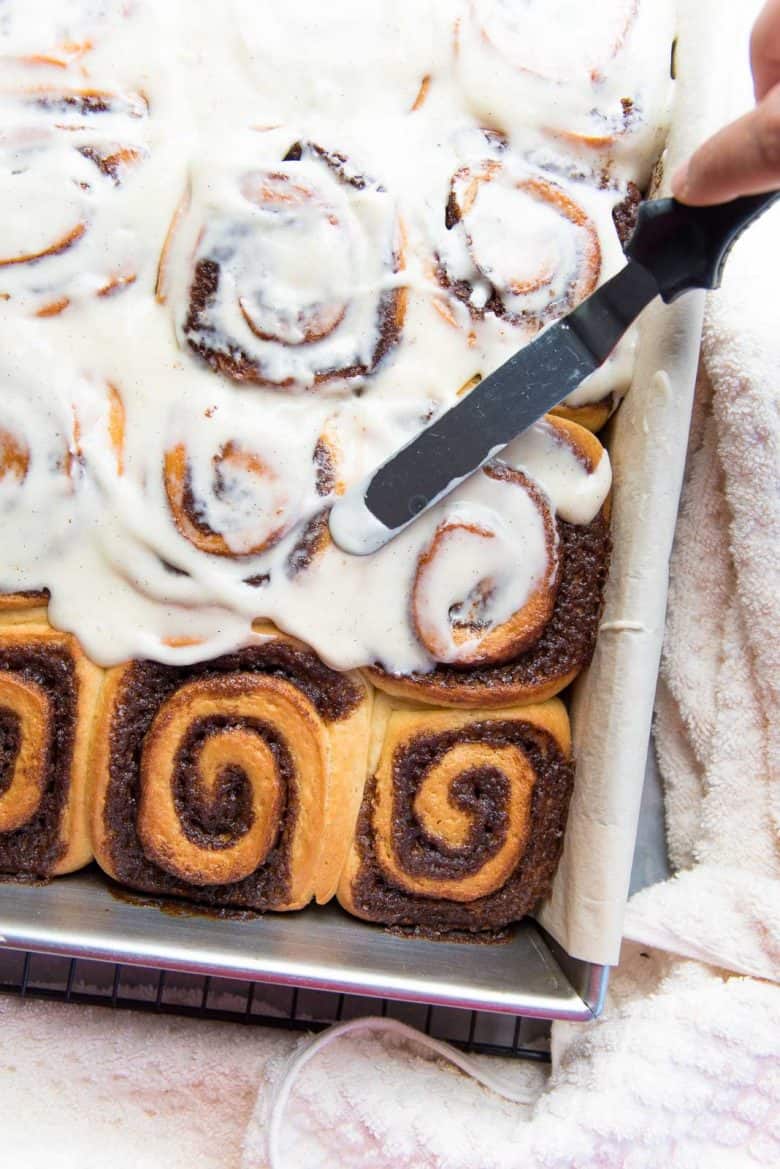 Serve the rolls while warm. Since you can prep these bad boys ahead of time, you can simply bake them just before serving. They are extra soft and gooey, and taste that much better while warm! 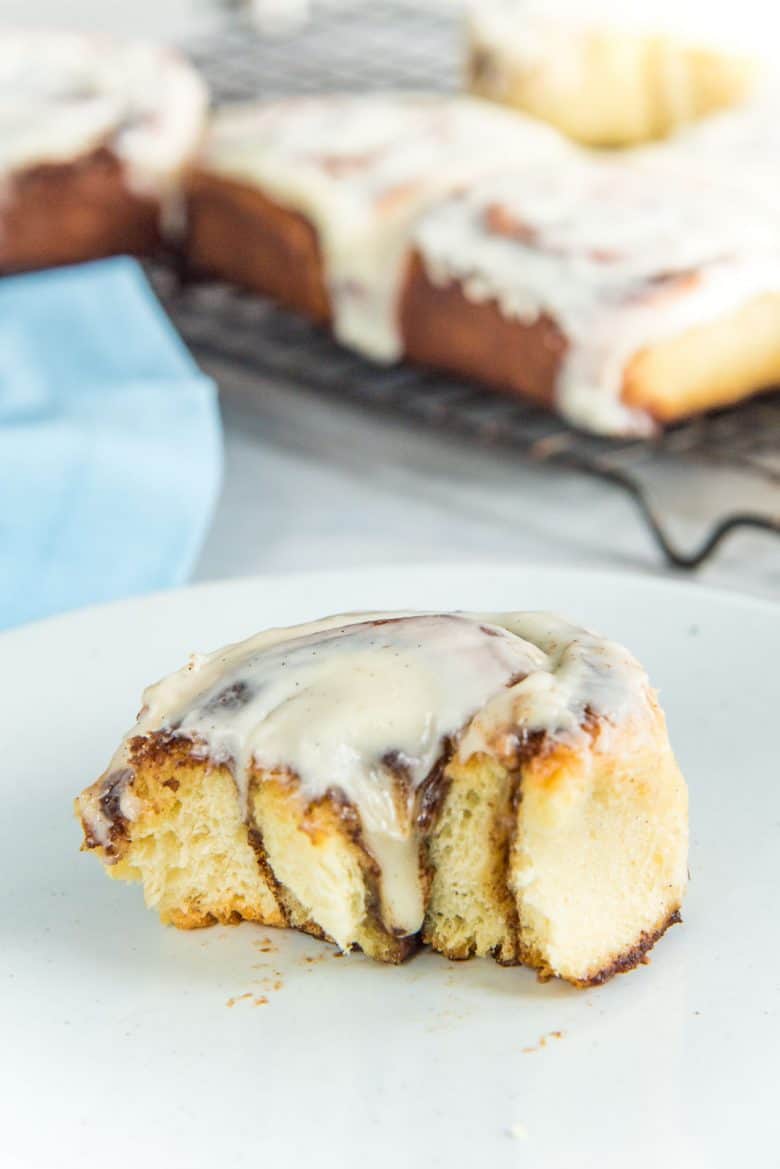 If you like this recipe, then you will also love, 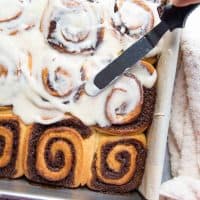 Author: Dini K.
Cuisine: American
Made with a rich, soft, fluffy, brioche-like bread dough, stuffed with a delicious butter-cinnamon-sugar paste, and topped with a tangy cream cheese frosting. Super easy, and can be made ahead of time too!

The cinnamon buns CAN be frozen before baking. Cover the pan tightly with plastic wrap, and freeze for up to 1 month. Allow the cinnamon buns to defrost overnight, and bake according instructions in the recipe. The frosting can also be frozen for up to 1 month as well. Allow the frosting to defrost at room temperature overnight so that it can be spread easily over freshly baked cinnamon rolls. Cinnamon rolls taste better on the day they are baked. If you DO have leftovers, store them in an air-tight container, and reheat the buns for a few seconds in the microwave so that they are a little warm and soft again.