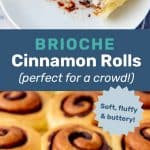 These Brioche Cinnamon Rolls are the best pairing of bread and cinnamon that you could think of! The softest and richest bread dough, with swirls of extra cinnamony sugar – cinnamon rolls don’t get any better than this!

These truly are the best brioche cinnamon rolls ever!

We don’t often have sweet breakfasts at home. They are mostly a weekend or special occasion treat. So when we do feel like cinnamon rolls, we make sure they are glorious!

I previously shared my overnight cinnamon rolls recipe on the blog. They are absolutely divine, but the buns are not as rich (less butter and eggs), and smaller in size compared to this recipe. But the good news is that this recipe can easily be turned into an overnight brioche cinnamon roll recipe too, so that you can serve freshly baked cinnamon rolls in the morning.

If you’re a fan of my brioche bread (and I KNOW a lot of my readers are!), then oh boy, you’re going to LOVE these too! Large cinnamon rolls, made with my buttery brioche dough, and a cinnamon packed filling. Yeah that’s right, these are big, buttery, cinnamony buns. With not just ONE type of cinnamon, but TWO! Then a delicious and creamy cream cheese frosting to top it all off!

What you will need to make brioche cinnamon rolls

I am using my brioche dough recipe here. It’s already beloved by so many of my readers, and consistently yields excellent results. This is a classic brioche dough with 50% butter.

This is not a lean brioche dough (which is made with less eggs or butter). As a result, it’s also a dough that is very soft and wet to manage. But if you follow all the steps that I lay out here, you can absolutely nail this recipe. You can check out my brioche bread post here for plenty of tips.

The one difference with these cinnamon rolls is that I skip the first room temperature proof, since there will be TWO overnight cold proofs (in the fridge).

Cinnamon for the cinnamon butter filling

I am using TWO types of cinnamon for my filling for these brioche cinnamon rolls. Korintje cinnamon (from Indonesia) and Ceylon cinnamon (from Sri Lanka). Both have very robust, yet different flavor profiles.

I prefer using dark brown sugar for my filling here. The deeper, molassey flavor is something I simply prefer. But you can use light brown sugar instead too.

I use JUST enough unsalted butter (mixed with as much salt as I prefer) to make my cinnamon sugar paste for the filling. You don’t want to use too much, because the bread is already rich with butter. So don’t go crazy with the butter in the filling.

In all honesty, I prefer eating these brioche cinnamon rolls without any cream cheese frosting. The rich brioche dough and cinnamon filling are the well-deserved co-stars in this show, and you don’t need no cameos from some cream cheese guest star here. But I get it though, because I used to be in the “frosted” camp too, not so long ago.

This frosting is thick enough to be spread on the brioche, or you can use a piping tip (or snipped ziploc bag) to drizzle it on top of the buns.

All you need for this frosting are,

Tips to perfect the brioche dough

I won’t go into all the details to make perfect brioche dough here. You can find EVERYTHING you need to know in this post here. But I’ll share a few important facts.

The filling couldn’t be easier to make! Make this when you’re ready to roll out and shape cinnamon rolls (after the brioche dough has chilled).

The butter needs to be very soft, or you can even have it melted (but cooled).

Mix the sugar and cinnamon (both types of cinnamon, if using) and salt, and mix to form a paste.

If you don’t want your filling to melt away, you can add 2 tbsp of flour to the mixture as well.

This mixture should be nice and spreadable. If it’s not easily spreadable, you can microwave the mixture for a few seconds to soften. But DO NOT let the mixture melt.

Remove the chilled dough from the fridge. Flatten it with your hands to remove any excess air.

Shape it into a rough square. Roll it out into a rectangle that is about 18 x 14 inches. Try to maintain the rectangle shape as much as possible.

Spread the filling as evenly as possible over the dough, leaving a 3/4 of an inch border along one long edge.

Roll up the dough, starting from the long edge (with filling), towards the opposite long edge (without filling). Make sure the roll is not loose and not too tight either when you’re rolling it up.

Cut the edges of the cinnamon roll log. This is optional.

Cut 12 equal pieces, and place each piece of brioche cinnamon roll on a parchment paper-lined half sheet baking tray.

Brioche dough is really soft at room temperature. It might be a little harder to cut through a large log of cinnamon dough without distorting it.

I’ve got a couple of tips to help you maintain the shape and make it easy to cut through the brioche.

First, mark 12 equal portions along the roll. Carefully slide a long piece of dental floss under the log of dough.

Repeat until you have 12 equal sized cinnamon rolls.

Place the rolls on a parchment paper lined half baking sheet pan and cover with plastic wrap.

Preheat the oven to 350 F / 180 C. Place the baking pan with the cinnamon rolls in the oven, and bake until they are golden brown on top, and the internal temperature is about 180 – 190 F.

While the cinnamon rolls are baking, you can prepare the cream cheese frosting. All you need for this are cream cheese, confectioner’s sugar, butter and salt. You can add more cinnamon to the frosting too.

This is an optional step. I know lots of people LOVE cream cheese frosting on their cinnamon rolls, but my family prefers these brioche cinnamon rolls with zero frosting.

That’s because the rolls are soft, sweet, and rich, all on their own. They simply don’t need any more sweetness and richness from the frosting. BUT, if that’s the way you (cinnamon) roll, then by all means, frost these babies to your heart’s content! 🙂

Once the cinnamon rolls are baked, you’ve got a few options.

These large cinnamon rolls are an absolutely amazing treat for special occasions! Another great thing about this recipe is that you can freeze baked brioche cinnamon rolls (unfrosted) for later. Simply let them thaw out at room temperature before devouring again!

Can I halve this recipe?

I don’t recommend halving the dough portion here. Regular household mixers will knead the dough better when made in the quantities given in this recipe.

HOWEVER, you can make 1/2 a batch of cinnamon rolls with half of the dough. Then make a gorgeous brioche loaf with the other half of the dough (French toast anyone?) or even make brioche burger buns.

These brioche cinnamon rolls are incredibly soft, buttery and sweet, and packed with so much cinnamon flavor. If you like brioche, and you also like cinnamon rolls, this two-in-one combo is going to blow your mind! 😀

These are perfect for breakfast or brunch, or as a special occasion treat for Christmas mornings, other holidays and birthdays! 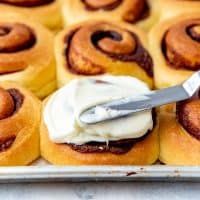 Author: Dini K.
Yield: 12 large cinnamon rolls
Cuisine: American, North American
The softest & richest Brioche Cinnamon Rolls ever! Rich brioche dough, baked with swirls of cinnamon butter & a creamy cream cheese frosting on top. Made with two types of cinnamon for extra flavor!INTERMEDIATE - Brioche dough requires some experience in bread making, as the dough is different from regular yeasted doughs. The rest of the process is easy and simple. Follow THIS RECIPE for an easier cinnamon roll recipe, where the dough is easier to handle. There is an overnight proofing step in this recipe.US based cup, teaspoon, tablespoon measurements. Common Measurement Conversions. Weight measurements are recommended for accurate results. You can toggle between METRIC and US UNITS using the toggle button below the ingredients list.
Prep: 2 hours 30 minutes
Proofing time + overnight times: 12 hours
Cook: 40 minutes
Total Time: 3 hours 10 minutes
Difficulty: Intermediate
Servings: 24 servings (½ roll per person)
Print Rate

Preparing the cinnamon rolls to serve

Course:Bread, Breakfast, Desserts, Tea / coffee break
Cuisine:American, North American
Keyword:Brioche Bread, Brioche Buns, Cinnamon Brioche Rolls, Cinnamon Rolls
Did you make this?Tag me on Instagram!I love seeing what you’ve made! Tag me on Instagram at @TheFlavorBender or leave me a comment & rating below.